With underwater landscapes that rival The Great Barrier Reef, the Caribbean or Micronesia, this remote and untouched aquatic paradise is slowly building its reputation as a world-renowned diving hotspot. With crystal clear waters, colourful corals and frequent visits from marine giants, this hidden gem is attracting more and more divers from around the world, who want to experience the rugged and unspoilt scenery that is Oman.

The sultanate of Oman is not just rich in history, but also in biodiversity. On the edge of the Indian Ocean, Oman is home to an overabundance of marine life. Hundreds of species of colourful reef fish take permanent residency in the waters of Oman, adding to the vibrancy and character of the reefs. Relaxing in the ridges and crevices of the coral, tranquil, stress-free turtles relax and watch divers as they glide past.The sea floor below these reefs is densely populated with a number of unique creatures that often draw divers from around the world. The seabed is often scattered with resting stingrays hiding below a thin layer of sand, honeycomb eels poking their heads slightly out of a piece of coral, or even a collection of three or four lionfish hovering over the sand beside a rock. And then come the creatures that cast great shadows on the sea floor, which glide above the coral patrolling the reefs. Although all kinds of sharks have been spotted in Omani waters, such as hammerheads, bull sharks and even tiger sharks, the species that make up the regular sightings in Omani dive sites are whitetip reef sharks, blacktip reef sharks, zebra sharks and the critically acclaimed whale shark. Diving with a whale shark is often at the top of many divers’ bucket lists, as it truly is a humbling experience, which often causes divers to travel across the globe and to the ends of the earth in search of one – everywhere from Mexico to Mozambique, but few people realise, Oman is one of the greatest locations that offers the opportunity to dive with a whale shark. Moving back up towards the surface, it is no less animated than the waters below, as dolphins are often spotted twisting and spinning above and below the waves, particularly in the wake of a boat gliding past. With that, we can see that there is no shortage of life within the waters of Oman. 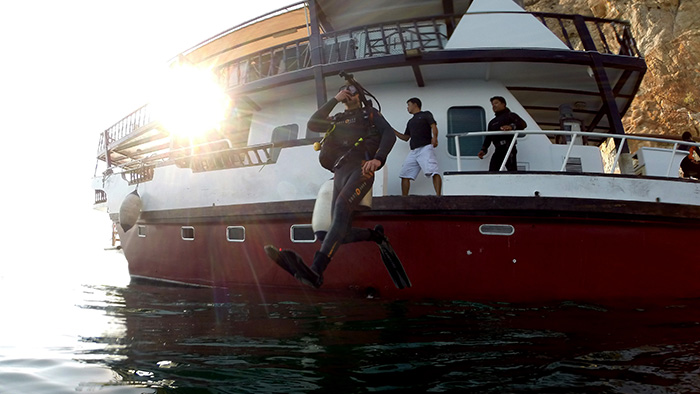 The conditions in Omani waters can vary, according to season, weather and migration of organisms like plankton. Generally, the visibility lies between 15-30 metres, depending on the dive site and conditions of the surroundings. As far as temperature goes, there are few dive locations with as much variation in water temperature as there is in Oman, with winter conditions being somewhere between the 19-21oc mark and summer being anywhere between 21-28oc, making it possible for different marine species to inhabit the area at different times throughout the year, contributing to the biodiversity of the area. As well, factors like plankton can alter the populations of certain species of marine life in the area, such as whale sharks. The plankton bloom, particularly between July and September, can attract whale sharks to the area, so despite a possible decrease in visibility, when the water is nutrient rich, it increases marine life abundance – so bad visibility isn’t always a bad thing! 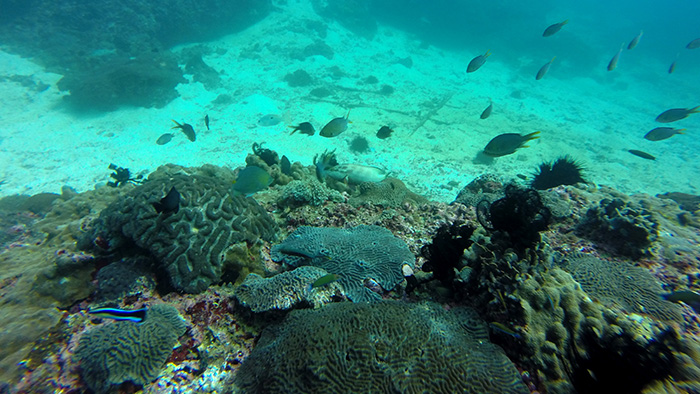 The diving in Oman is as diverse as it’s marine life, with several different types of diving available to enthusiasts. The range of dives in Oman include reef dives, drift dives, cave dives, night dives, boat dives, beach dives and wreck dives. Clearly, much like biodiversity, Oman doesn’t fall short when it comes to diversity of diving.

With reefs scattered all around the coast, reef dives are readily available along most of the coastline. Some of the best reef dives are found in Musandam, which is the northernmost part of Oman, usually accessed through the UAE. The most popular dive sites in the Musandam area are Lima Wall and Lima Rock, where you can dive along huge walls of colourful coral, and often receive visits from huge schools of jack. As well, this is one of the sights where, in the cooler months, whale shark sightings are frequent. 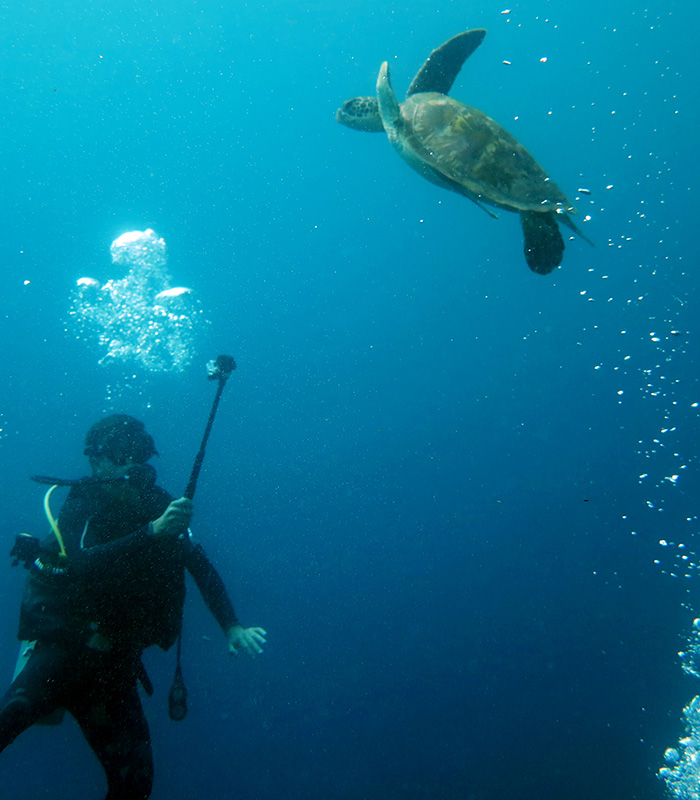 Still in the Musandam area, for cave enthusiasts, “The Caves” dive site lies within eroded walls of the coastline, and is made up of a number of rock chambers and tunnels that make for a very interesting and intriguing dive, unlike any other. Beams of light from holes in the ceiling of the cave illuminate the natural sculptures in the inner-part of the cave, making this chamber a true spectacle. Within the cave it’s not uncommon to spot resting sharks or stingrays on the sea floor. This is one of the most interesting dives in Oman.

Moving southeast, toward Muscat, the diversity of these dives only increases. For those in search for some truly awe-inspiring levels of life on the reefs, the Damaniyat Islands, about 70 kilometres west of Muscat, is the place to visit. The Damaniyat Islands is a nature reserve, made up of nine islands that is internationally recognised as one of the most beautiful dive locations in the Gulf of Oman. This cluster of islands features pristine white beaches, wrapped with crystal clear waters – an island paradise that once arriving at, it makes you feel as though you could be anywhere in the world. On the shores of these islands, a large number of sea turtles rest, lay eggs, and nest there – so you know you’re bound to see turtles during the dive. As well, the islands are magnets for migratory and indigenous birds that flock there throughout the year. Large and unique reefs made up of vibrant corals that rival that of the Great Barrier Reef surround the pristine islands. These reefs reach a depth of around 30 metres – perfect for a long dive. As well as the usual mix of marine species, the Damaniyat Islands are particularly well known for regular shark sightings, particularly, zebra, whitetip and whale shark varieties. While diving in the Damaniyat Islands in February 2015, I was fortunate enough to encounter one of these gentle giants towards the end of the dive, near the surface – so speaking from firsthand experience – the opportunity to spot one of these natural wonders is certainly there. 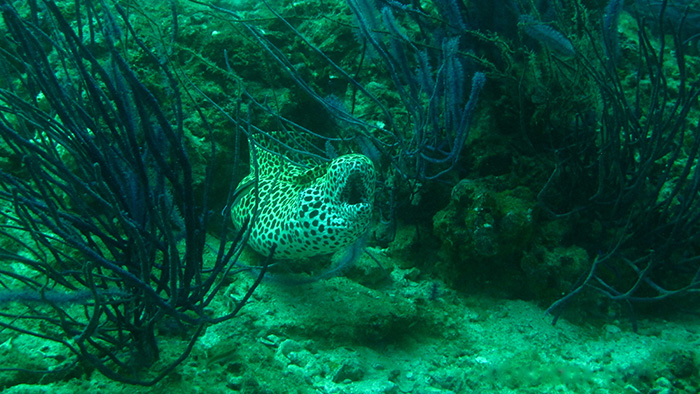 Also in Muscat, an area called Bandar Khayran is made up of a number of different coves and bays that contain within them some excellent dive sites. Within Bandar Khayran lies one of the greatest wrecks in Oman – the Al Munassir. The Royal Navy of Oman sank this 3,000 tonne vessel in 2003, allowing an artificial reef to develop on and around the ship in the 13 years it has been submerged. The ship lies upright about 30 meters below the surface and makes for the perfect wreck dive. The open corridors along the sides of the ship are perfect for divers who don’t feel confident enough to penetrate the ship just yet, but who still would like to get the feel of exploring a sunken shipwreck. There are also opportunities to go further into the wreck for more experienced divers (PADI Advanced Open Water and above). Within the wreck, a number of schools of fish hover still in the open corridors and chambers, and often honeycomb eels lay along the bottom in cracks in the hull. Giant Moray Eels are frequently spotted on the boat, so caution must be taken when swimming through narrow corridors so as not to disturb the permanent residents on board. On the main deck of ship, turtles often lay in rest, although they are sometimes hard to spot as their green-brownish shell often blends in with the rusting hull of the sunken vessel.

Another great dive spot is an island just off the coast of Muscat called Fahal Island, nicknamed Shark Island. The most well known attraction at this dive site is probably quite clear. Whitetip and blacktip reef sharks are often spotted on the sand banks of this dive site, giving the location it’s name. The reefs at this site reach 40m below the surface, making it quite a deep dive compared to most reefs in Oman. 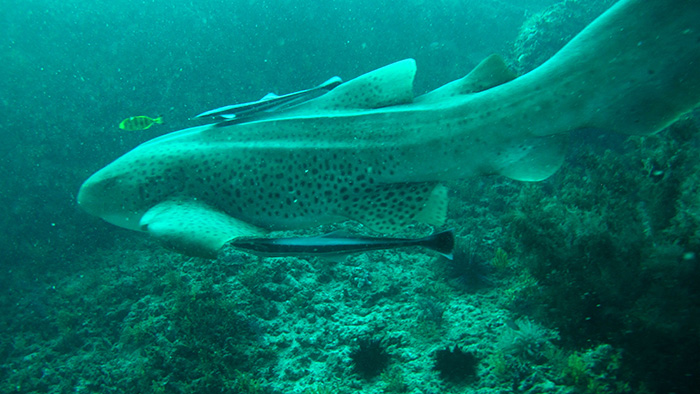 The diving in Oman is not to be missed. There a few places on earth with the different diving opportunities that Oman has to offer, and the one thing that Oman has that most diving hotspots don’t, is it’s unspoiled and pristine state. Few people are aware of the fantastic diving that Oman has to offer, making it only an upcoming diving destination. With that, the reefs haven’t been subjected to the damage that popular dive sites unfortunately often are, the waters aren’t busy with a number of different dive companies sharing one site, and the rare and magnificent marine species that frequent the area haven’t yet been scared off by busy traffic lanes of boats or large and frequent groups of invasive and intrusive tourists. Too often however, these wonderful and natural locations lose their immaculate condition as more development occurs. So while it still remains one of the most pristine diving locations in the world, dive Oman!