When Mark Buley was training for UTMB by Oman last fall, he heard about the original Big’s Backyard Ultra in Tennessee, organized by Lazarus Lake of Barkley Marathons fame. Mark got the ok to replicate the Big’s Backyard Ultra here in UAE from Laz, who promised the winner a ‘golden ticket’ to the 2019 Big’s Backyard Ultra in the US. Mark got myracekit.com and Savills KSA to support the event in the Dubai desert at Al Qudra, where we could have a scenic daytime loop around the ponds and a nighttime loop parallel to the cycle track – plus the added bonus of readily available ‘facilities’. 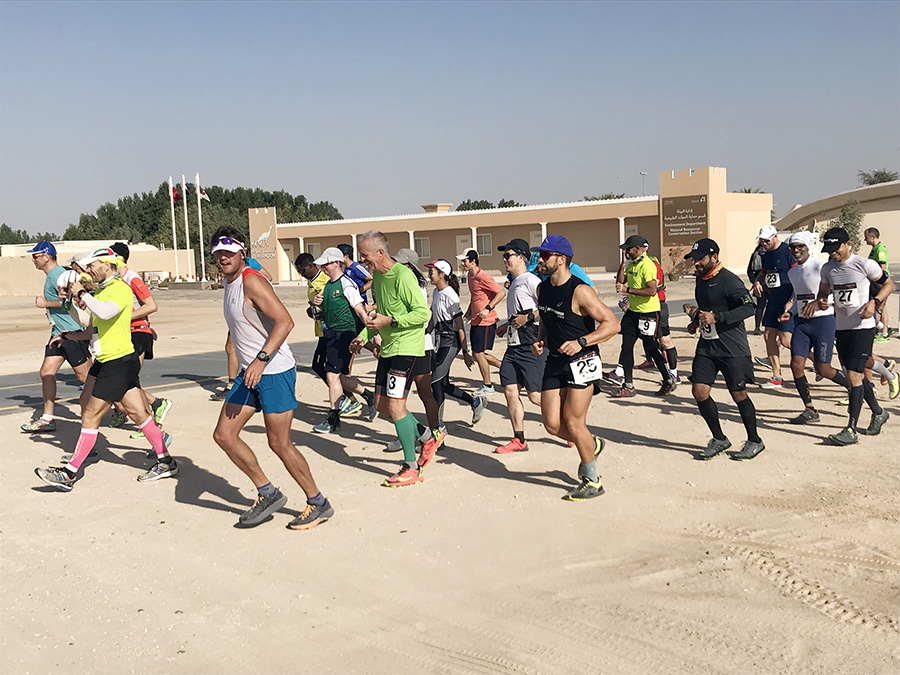 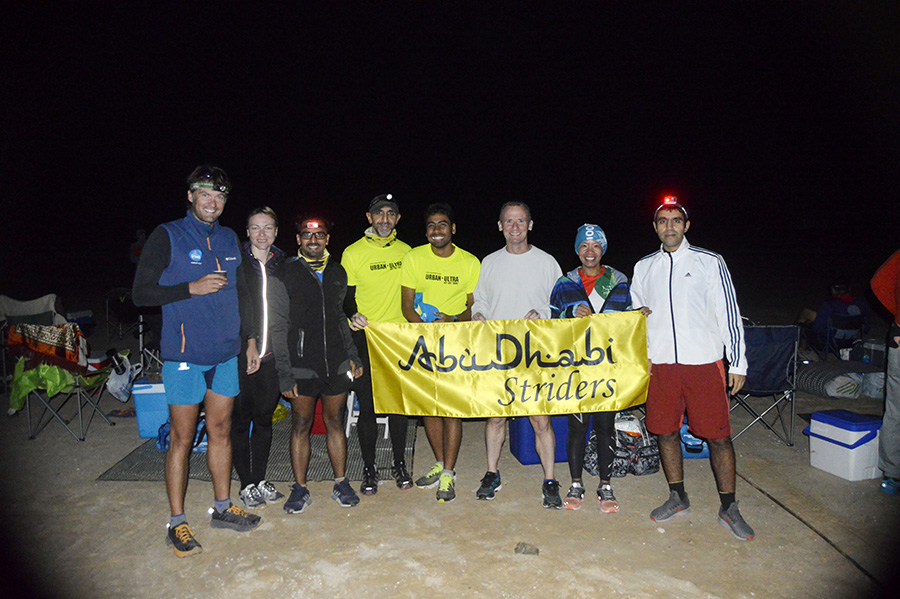 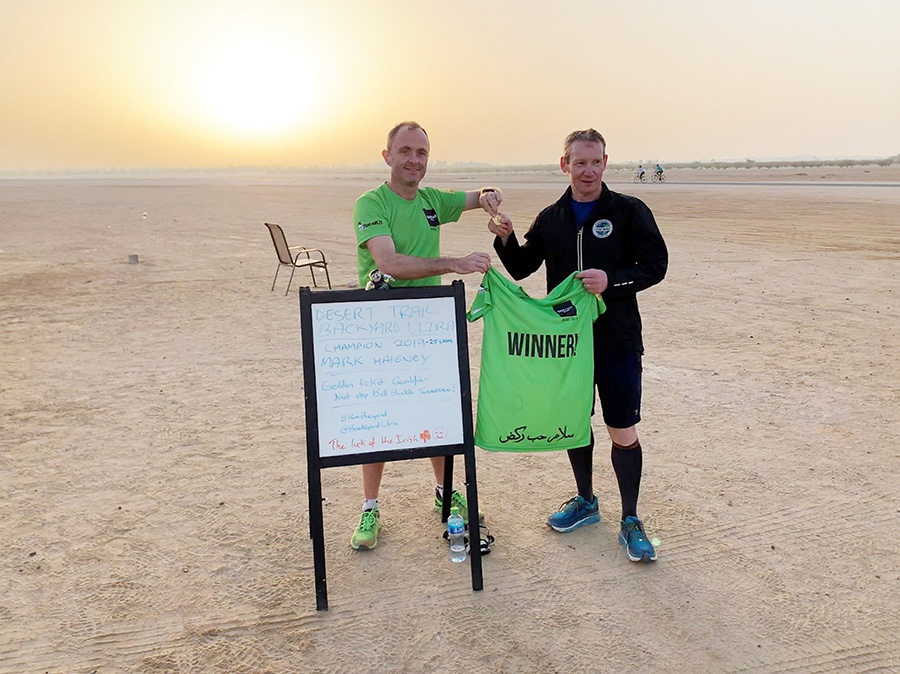 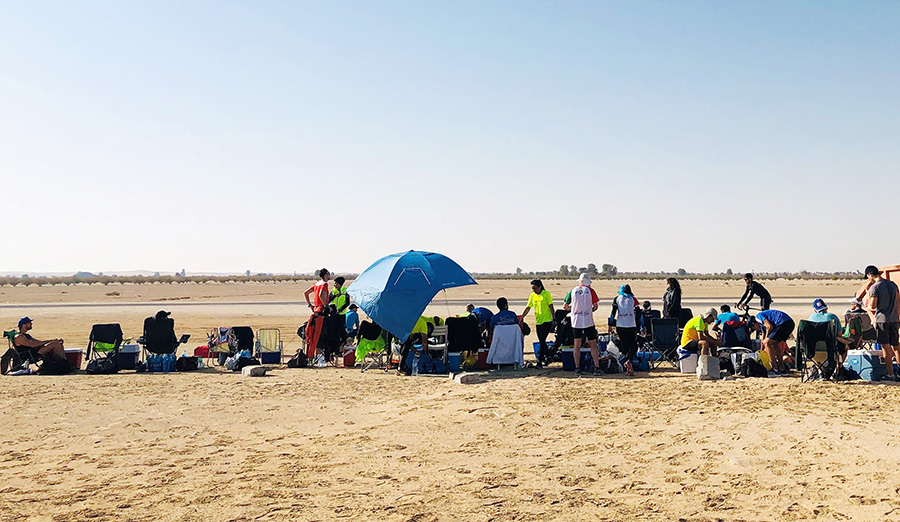 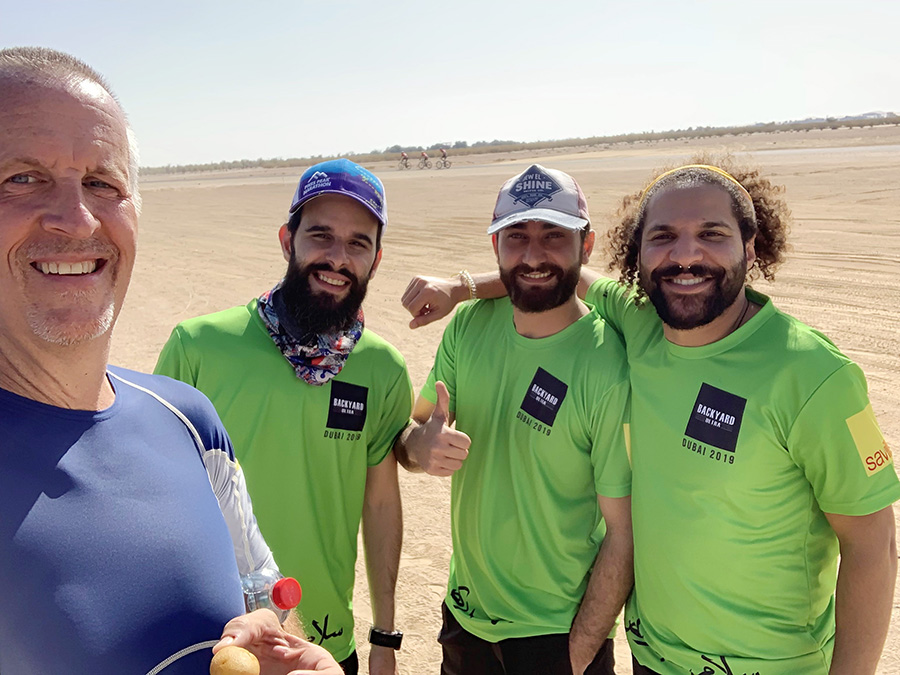 The DTBU Concept
Every hour, everybody runs a 6.7km loop and continues until only one runner is left standing. The last runner must run the final loop alone to be declared the Winner, and everybody else is ‘DNF’. Desert Trail Backyard Ultra (DTBU) is a brutal concept, despite its simplicity.

So simple
On a cool Friday morning the week after the Dubai Marathon, 37 runners embark on a simple 6.7km run at Al Qudra and then wait at the start for the next loop on the hour. Most runners complete the 6.7km in 45-50 minutes, so they have to wait 10-15 minutes for the next loop. Everybody is self-sufficient, with their own nutrition and hydration, as well as lawn chairs for rest breaks.

Strategy
If you run slowly, you reduce your recovery time before the next loop. If you run quickly, you may rest more, but the excess energy expended may have a cost. When you do the math, this sounds like easy running. Many runners can run 6.7km under forty minutes and feel great afterwards. Aren’t you a little curious how many times you can run at a very comfortable pace slower than that? You just keep running and running, until you can’t. The final race distance is unknown and is determined when only one runner steps up to the line and runs the last loop, which is why the race is sometimes called “Last Man Standing”.

The Course
The easier the course, the tougher the race. If it is an easy 6.7km loop, then you may get lulled into a false sense of security about how easy the day will be. You do not get a prize for being first finisher each loop. You do not get penalized for being the last finisher. Essentially at the start of each hour, everybody is tied for first place. You don’t need to run fast. You just need to be in the corral before the next time Mark Buley rings the Yak bell for the start of the next loop.

The Runners
Runners want to run, and serious runners want to do serious runs. Mark did a couple Facebook posts so word got around, and we had a bunch of ultrarunners from InnerFight, Abu Dhabi Striders, and Urban Ultra regulars as well as some random runners. 37 runners showed up at 06:00 with chairs, food and water.

Gear
The format of running a slow 6.7km loop and then sitting around waiting until the next loop starts is discombobulating. Your pace is different – you are not ‘racing’ anybody. You need to optimize your energy expenditure. There is no water station on the course, so you need to carry everything you want. You can enjoy all the food you want – as long as you packed it with you.

Running
The first loop starts in darkness, so we run out and back along the cycle track. It feels like a social gathering, where old acquaintances are chatting and others are introducing themselves. Everybody is doing some gear check, despite the early morning cold of 15C. It’s an easy loop that everybody finishes in 40-50 minutes.

Hour 2
After sunrise and a short break, we start out on the daytime course. The daytime course takes us around the Al Qudra lakes, and the trail is well-marked with orange dots painted on rocks. Nonetheless the challenge is that the trail meanders between the ponds so the volunteers from Savills guide everybody along the correct route. The second loop takes most people 45-50 minutes to complete. At the break, we shed some layers of clothing, get some nutrition and water.

Hours 3 – 11
The brutality of the concept becomes clearer with each hour. We run in small groups, with the typical casual chit chat of ultrarunners. We are all trying to reel in our inefficiencies so we can focus on the task at hand, while minimizing effort. With temperatures raising over 30C and the warm desert sun intensifying, we try to maintain the optimal pace and enjoy the birds at the Al Qudra lakes. I run with my buddy, Pornsak – with whom I ran Hajar and Cappadocia ultras last year. I am not surprised to see a lot of very strong runners ahead of me, but what is striking is seeing a couple of serious ultra guys consistently running slower than me. There was a guy wearing “Ireland Ultramarathon Club” kit who was holding back on most loops – pretty suspicious, and later I would learn why.

My DNF
My day effectively ended during Hour 6, when I really started to struggle. The format threw me off my game – I was enjoying food during the breaks, but I was not hydrating as I typically do. Oops. I was redlining it to make the hourly cutoff. When I started Hour 7, I was carrying my nutrition and Diet Coke through the start corral when Mark rang that Yak bell. I was doomed and missed the hourly cutoff by a minute. Pornsak keeps going and when he tries to tap out at Hour 9, his request is denied so he runs another couple hours – until he
really cannot run any further.

Night Loops
Five runners make it through the day loops and return to the night track. Some show strength, while some attempt to hide weakness. To us observers, we try to separate the pretenders from the real deal. Is somebody running faster to make a pitstop? Is somebody runner slower for energy conservation? Is somebody pushing the pace to psyche others? They are silent and focused during the breaks and wait until after the one minute whistle to slog over to the start corral. At Hour 15, one runner drops – enough. At Hour 16, one runner has a back spasm – done. At Hour 17, one runner admits defeat – the other two are clearly too fresh.

Rob Jones & Mark Haigney
Rob ran UTMB by Oman in just over 36 hours, so I am not surprised to see him running strong at Hour 18. Mark Haigney is a 45 year old Irish ultrarunner visiting his sister in Abu Dhabi, and he decided to coordinate his visit to give himself a chance to win a golden ticket to the Big Backyard Ultra in Tennessee. I ran a couple early loops with Mark, and he had a strategic approach to DTBU. He was running suspiciously slowly to time his loops to finish just under the hour cutoff during the day. At night, Mark was in his element throwing down 45 minute loops to give him time for five minute naps before heading out for the next loop.

25 Hours and 168km later…
Before starting Hour 20, Mark smiled and said everything is good. After Hour 24 and 161km, Rob went to the start corral, shook Mark’s hand and wished him well. And then there was one … in accordance to the rules, Mark Haigney completed the 25th loop to be declared the winner of the golden ticket and became Dubai’s Last Man Standing. ■