We’re really very lucky to have the Daymaniyat Islands situated so close to the UAE. It’s easy enough to make the most of a getaway weekend in Oman, and the convenience of getting yourself over to the Millennium Resort Mussanah and dive these underwater island wonders with the Oman Sail’s dive centre is second to none.

The Millennium Resort Mussanah booked us in to their hotel apartments that are located just above the dive centre with a view overlooking the marina. The nice thing about the apartments is that they are equipped with kitchenettes, so you have the option of catering for yourself should you wish to stay in the comfort of your room. 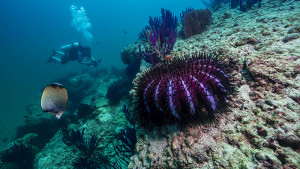 The Daymaniyat Islands
There are nine islands in the archipelago of the Daymaniyat Islands Marine Nature Reserve, which is a UNESCO protected marine park. They are renowned in the region for their unique ecosystem, migratory birds and nesting turtles. Whale sharks (Rhincodontypus), leopard sharks (Triakissemifasciata), large honeycomb moray eels (Gymnothoraxfavagineus) and rays are often spotted and it’s just a matter of being in the right place at the right time!

Seaoman Dive Centre by Oman Sail
The dive centre offers Nitrox so if you are certified to use it, it is advised to book your tanks in advance. The dive boat leaves at 0800 daily and returns around 1600 after two dives. It takes an hour to get to the closest dive site, Sira, and 1.5 hours to get to Aquarium, the furthest one away. The dive boat is perfectly adapted to store all your equipment, and is spacious and comfortable. There is a smaller upper level with an elevated view which is a nice touch if there are many people aboard, meaning that you can spread out.

As you are going to be out most of the day, you will want to think about having some lunch organised to take with you, or it will end up being a long time since you last ate something at breakfast. That is, if you are a person able to eat first thing in the morning. The dive centre organises plenty of drinking water on-board, and they alternate with tea, coffee and biscuits one day and a selection of fruit another.

The hotel can arrange lunch boxes at 85 AED each that consist of a bottle of water, a sandwich (vegetarian option available), some fruit, a small salad and a selection of pastries. You end up being the envy of other divers aboard if they haven’t arranged food for themselves. The only thing you have to remember is to go to the reception in the main hotel to pick your lunch boxes up, or you will delay the boat departure as we did on the first day. It won’t make you popular. 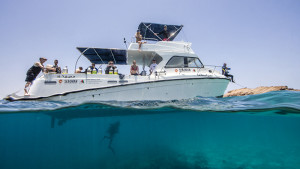 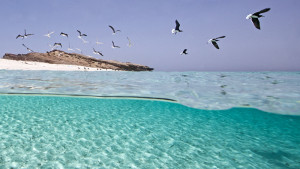 The Dive Sites
1. Aquarium
11:09 | 23.3m | 26˚C
Our first day out and the visibility was fantastic, with clear views up to 30m. We saw three hawksbill turtles (Eretmochelys imbricata) on this first dive and as usual Simone managed to get a few star poses from some of them on our trip! A few minutes later, a couple of large honeycomb moray eels (Gymnothorax favagineus) peering out of a nook, entwined in conversation, gave us an approving right of passage. A school of ring-tailed cardinal fish (Ostorhinchus aureus) made for some fantastic shots too.

Towards the end of the dive, some curious batfish came over to hang around and get their photos taken in the awesome viz. It was a nice introductory dive to the trip.
Aquarium is the top rated dive site of the Daymaniyats, and rightly so. However, on this particular day, there weren’t as many things to see as there have been when I’ve dived it in the past. Everything you normally see here appears to be dosed on steroids. If you get to plan the trip as a long extended weekend and get an extra day in which to dive Aquarium more than once, you will definitely see more of this dive site’s magic. 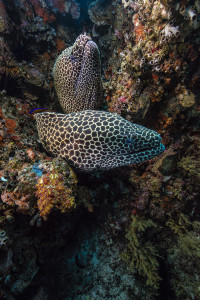 2. Sira
13:13 | 16.3m | 27˚C
We had an epic start to this dive. It’s the cuttlefish mating season and we dropped down on a whole load of them. There is nothing cooler than a cuttlefish, and if anyone says any differently, they haven’t spent time hanging around these alien looking creatures and witnessed the functions of their vessel-shaped bodies up close and personal. It’s a good job there were lots of them around, as no one had to fight over photographing a subject. I may have got a little too close filming my pair and got the wrath of ink projected at me in my rude intrusion of the female’s egg-laying. It had not been my intention to disturb her in her labour and she had made it perfectly clear that I had.

There seemed to be a lot of scorpionfish on this particular dive, or I had just been made more aware of them when one very attractively camouflaged specimen, cushioned on the polyps of a soft coral, was situated just below me while filming yet another cuttlefish. Scorpionfish are not always the most interesting of fish to photograph, especially when they’re bland in colour and look no different from their backdrop resting place, but Simone managed to get a good shot of this one against the contrast of its throne. I then inevitably began to spot them throughout the rest of the dive, making sure not to place any of my body parts on one while filming. 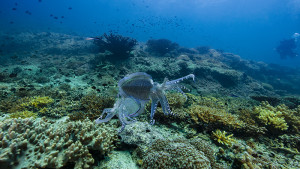 3. Doc’s wall
9:42 | 14.9m | 27˚C
Visibility on the second day was not as great as the first day, but we were still veering towards 15 metres. The water was a little bit more on the cloudy front this time around.

Big schools of snappers hung in the foreground of many of the seascapes just about everywhere, creating amazing formations in their poetic motion. Unfortunately, the depth of field was lost in the photo and video due to the thick texture of the water, unless you could get right in between them. It was tough to get close though, as the closer you got, the further away they swam, being pesky and fidgety little models.

Crown-of-thorns starfish (Acanthaster planci) had moved into the area and we came across quite a few of these big purple monsters scattered about the hard corals. There was no obvious damage from them at this stage and with it being a reserved marine park, one assumes the municipality will tackle the problem if one arises.

Surface interval on Junn island
There is no better way to do a surface interval than in crystal clear turquoise water, overlooking a white sandy beach! A pure joy and a touch of paradise. Your lunch break will never feel as good as that once you’re back at work.

We finally got to see a medium sized black spotted stingray, also known as a marbled stingray (Taeniurops meyeni) hanging out under a small school of fusiliers. We would have easily missed it if Simone hadn’t looked down and gone to get a shot of it, as it was below us when we were coming up to the shallows to hang out for our safety stops. Rays are regularly sighted at the Daymaniyats, but were scarce this particular weekend, as were the leopard sharks!

Once back up on the surface, the sea turned within seconds and started to churn up some mean waves. We had had flat calm seas up until this point, and the call to close the day’s dives was upon us. With a tough clamber back onto the boat, we patiently waited for the other dive group to come up from their dives.

It was a choppy ride back to the Millennium, but the rough sea didn’t slow the journey down. I had to made sure to ask for late check outs so we could get back to shower and properly pack our gear away before the drive back to Dubai. 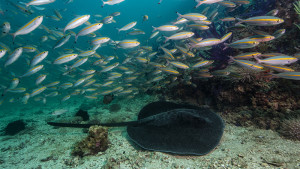 Drive or fly over
The choice is yours as to whether you prefer driving or flying to Oman. If you fly, you lose out on a day of diving and you need to be aware the hotel is about an hour’s taxi drive from Muscat’s International Airport. With the option of flying, you get out of driving back tired with 4 or 5 hours of road ahead of you both ways! It really is a personal preference. We don’t like missing out on the dives, so for us it’s an easy decision to make.

The Millennium Resort Mussanah and SEAOMAN Dive Centre are located 85km north of Oman’s capital city, Muscat and an hour closer to the UAE.

A very big thank you to both the Millennium hotel and SEAOMAN for hosting our trip and looking after us so well!