How a Bicycle is Made

“Visiting a factory where our beloved “two-wheelers” are built”

The first vehicle resembling a bicycle was invented in France in the year 1791 by Comte Mede de Sivra, called “celerifere”. It was a wooden scooter with two equal-sized wheels and a seat, but no steering, brakes, or pedals; velocipedes were driven by kicking the ground with the feet. Only in 1869 the word “bicycle” came into use; when pedals were introduced, this was a very big improvement.  Bicycle frames began to be constructed entirely of metal, an improvement in both performance and material strength over the earlier wood frames, and bike design began to change accordingly. 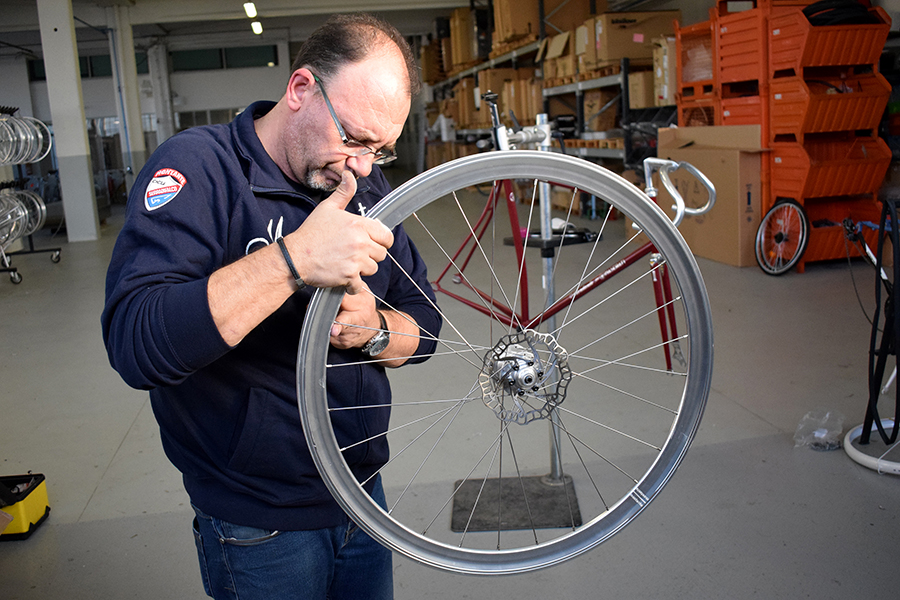 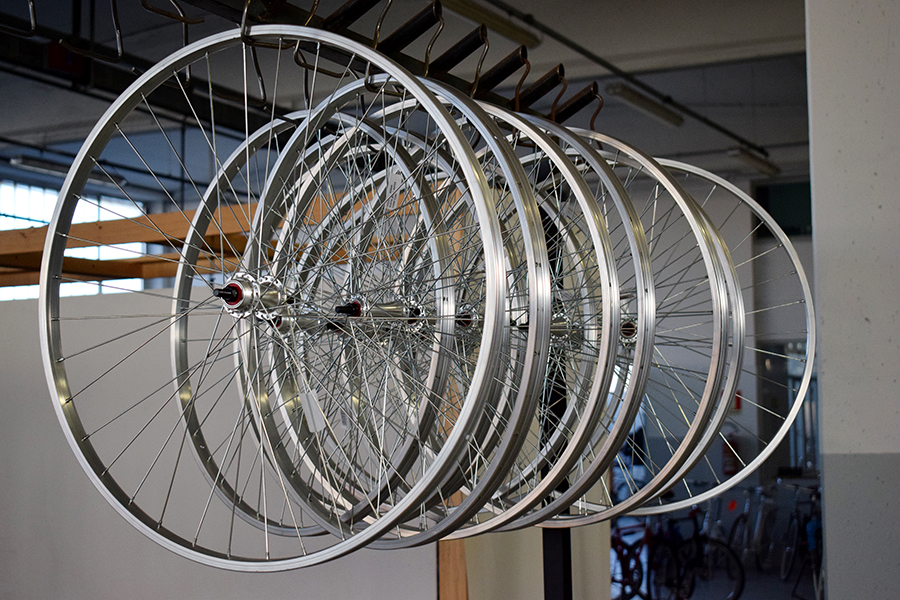 The pedals were still attached directly to the front wheel but solid rubber tires and long spokes on a much larger front wheel provided a greatly improved ride.

The transmission of the movement was solved by connecting the pedals to a gear wheel linked to a chain, this technical innovation allowed a reduction in the dimension of the front wheel. The next stage of bicycle development came with the creation of the safety bicycle by John Kemp Starley. The safety bicycle became a reliable and comfortable device that could be used by people of all ages for everyday transportation. Soon, the new safety bicycle started to be coupled with inflated rubber tires that ended the jolting and painful ride inflicted on cyclists when hard rubber tires were the norm. 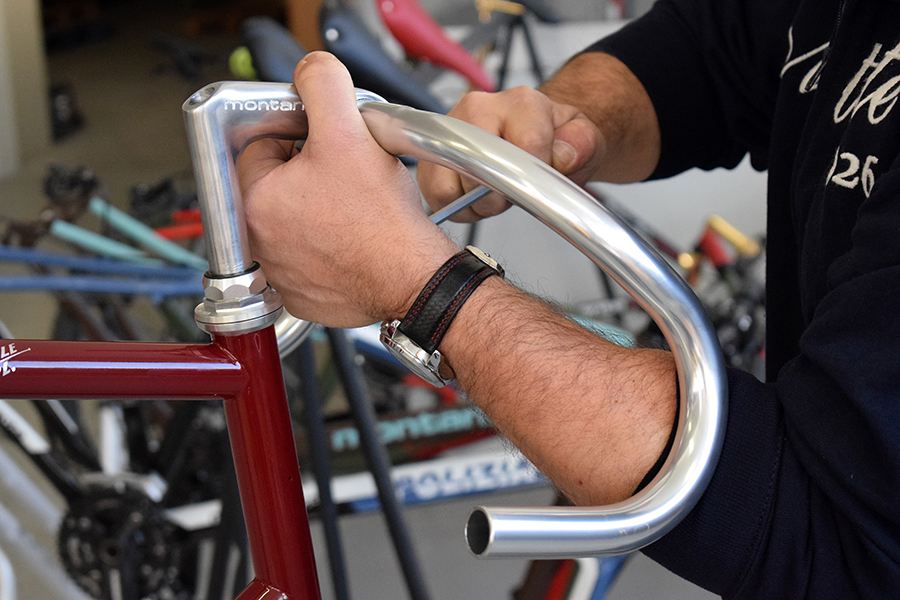 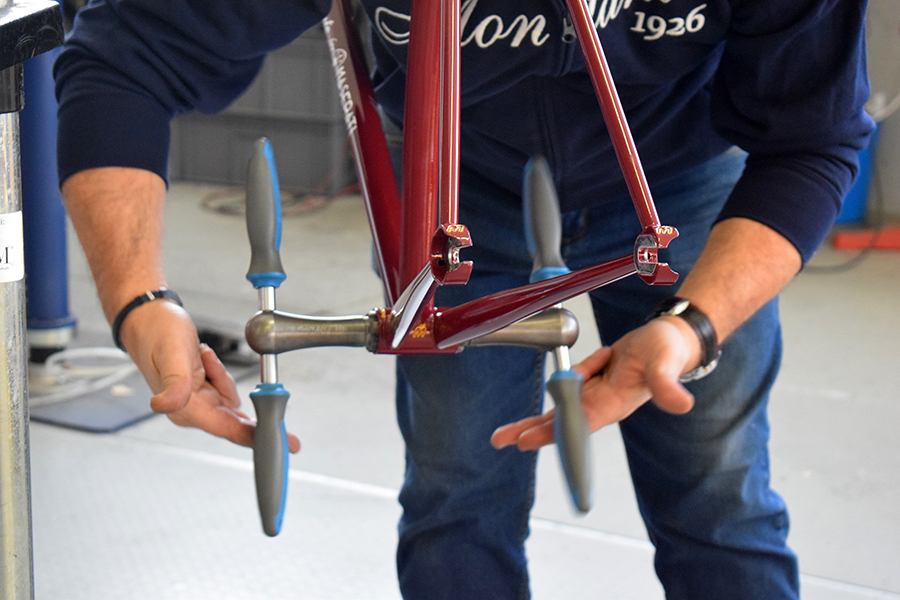 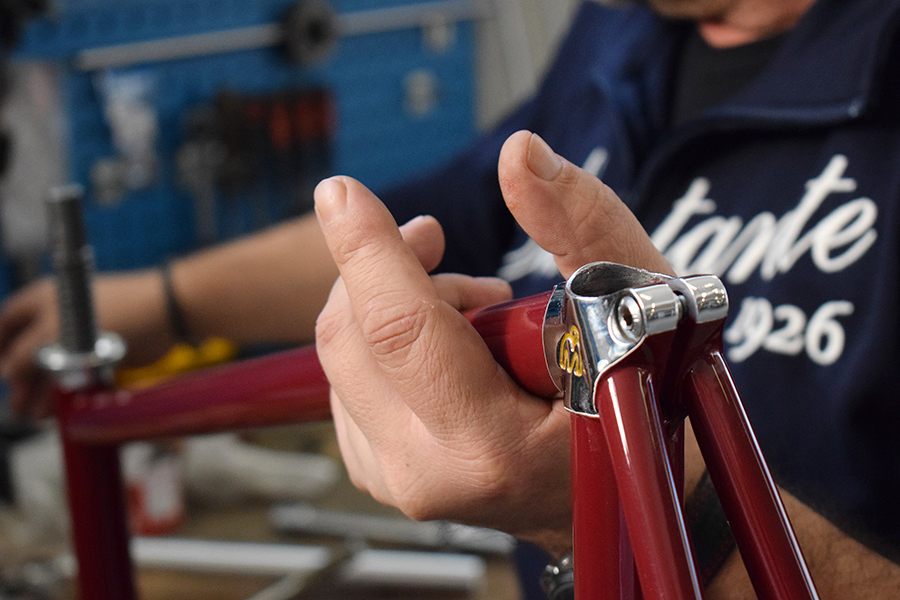 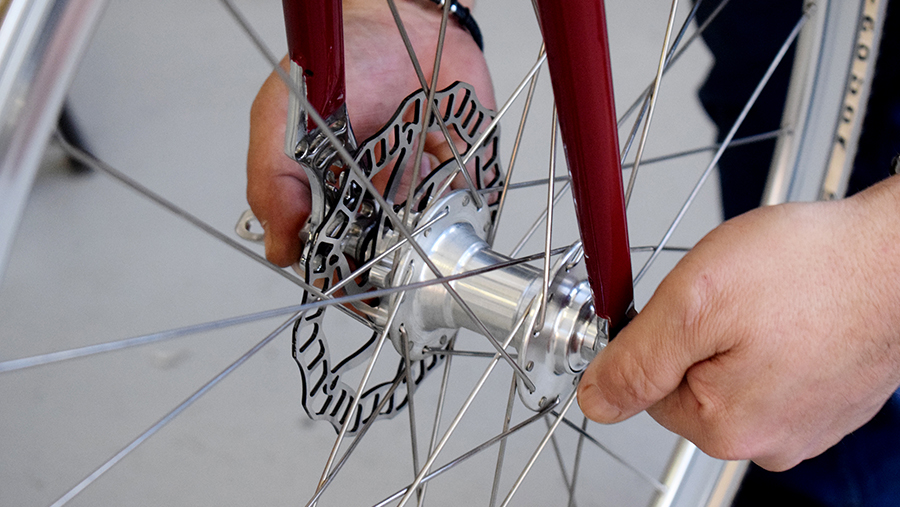 In the early 20th century, were introduced the first cycling competitions as the Tour de France (1903) and the Giro d’Italia (1909).There many different types of bicycles and many types of people with biking needs. Some people like tricks, some like races, and some like speed control. You will need to take into account your own preferences when choosing the right bicycle for yourself. 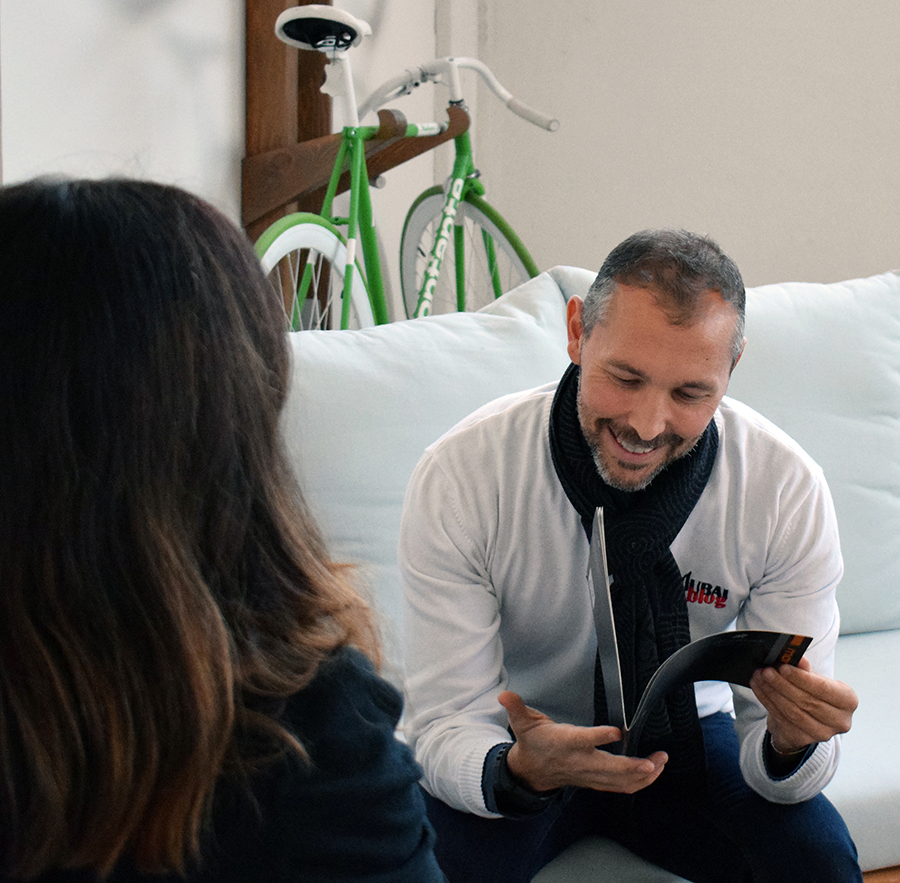 The first step in building a bicycle is to design the frame you intend to make. It is important to decide which material has to be used and the dimensions. There are lots of materials, but the expensive carbon fiber has to be preferred when lightness is required. 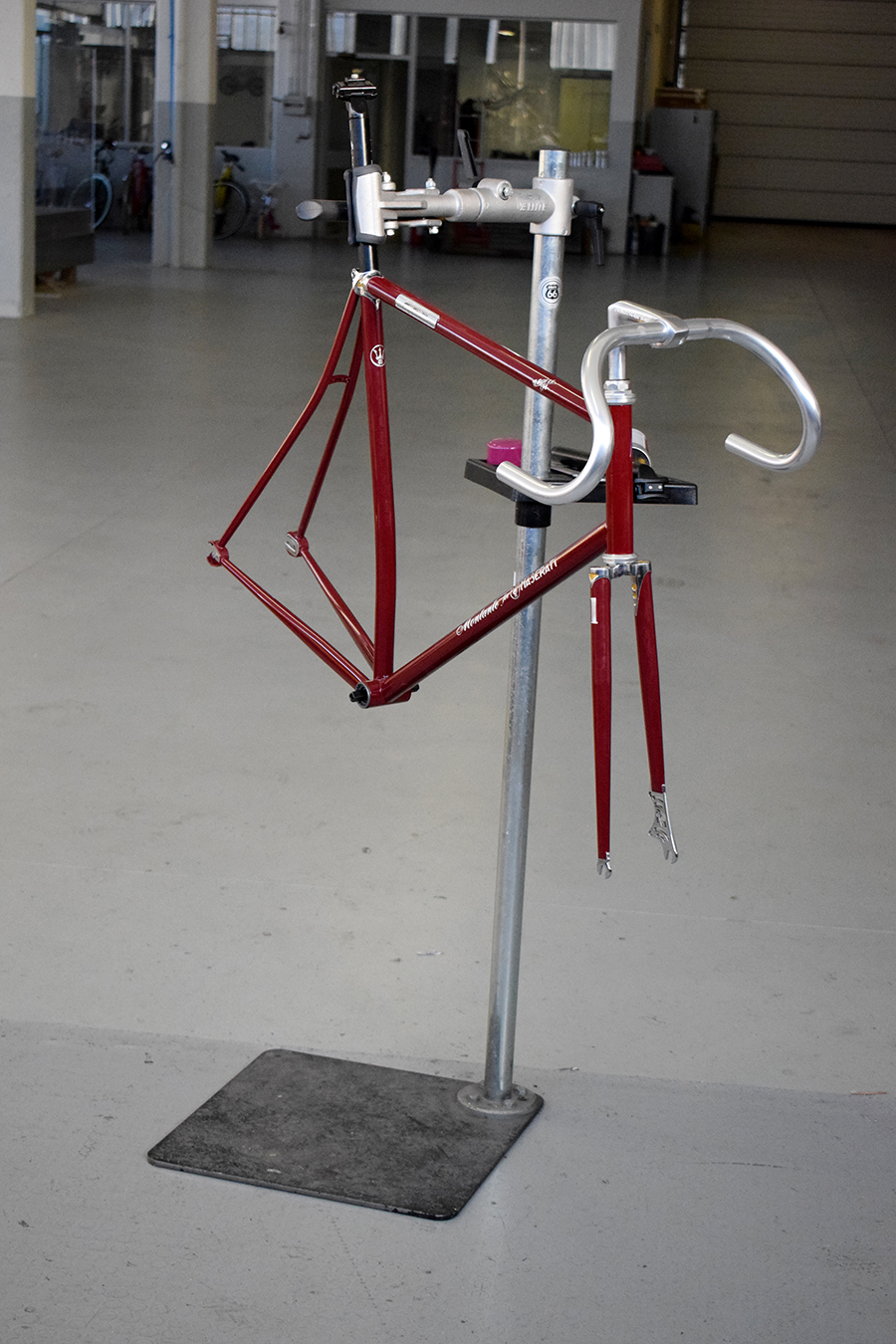 Regarding the frame, we have to make a distinction between a large scale and tailor-made production. In the second case, the measures are to be taken directly from the customer as if it were a suit, taking also all the characteristics needed for the ad hoc frame construction.

In both cases, one has to be study the geometry of the oblique and steering tube, whose junction point is the most stressed part of the entire bike. It is also important to study the connection of the rear triangle (formed by vertical chain stays and seat stays) and the front triangle (formed by oblique, top and seat tubes). The bottom bracket shell is exposed to a heavy stress, due to the energy given to the pedals. In order to counter these forces, it is necessary to correctly design the dimension of the rear chainstays, defining the final diameter and the position of the coupling. 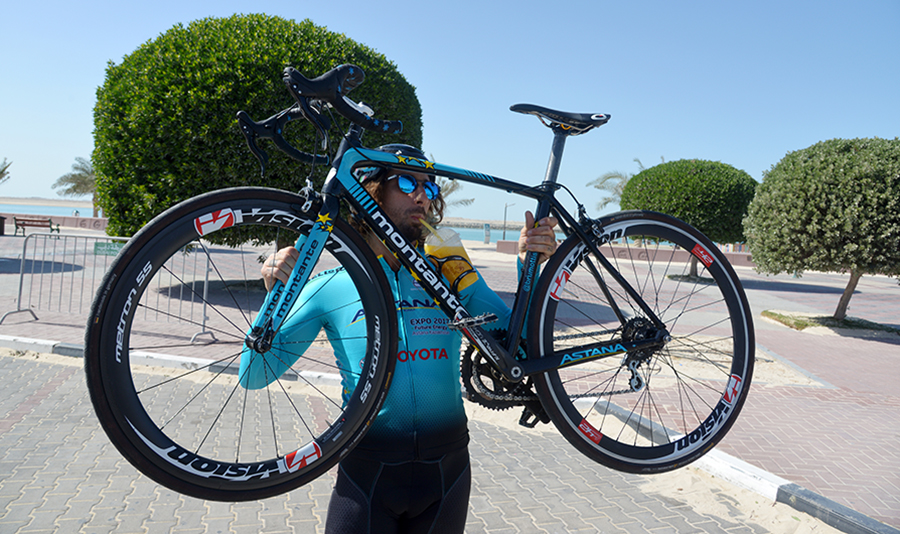 To draw a frame, you use a CAD software with a three-dimensional modelling programme, taking in consideration the forces at work and the subsequent resistance. Some software can simulate the movement of a bicycle in order to detect instantly the weak parts of the frame. Once the frame design is completed the construction phase begins which includes: the assembling, painting, and finishing. Steel frames need the accuracy of welding and the choice of tubes.

As made evident recently in a flurry of videos on https://www.cycle-sos.co.uk/, carbon frames require a different method of construction. The carbon fiber layers are wrapped around a core, inserted into a mold which is after put in a high-temperature oven. In the following steps, the oxygen is removed while the heating solidifies the resin. Once a mold is open the core has to be removed and finishing has to be done.

It is a long process to get from the raw materials to the finished product, this process is time and energy consuming. This is the reason why carbon fiber bicycles are very expensive, but compared to other ones are more resistant, stronger and very light. 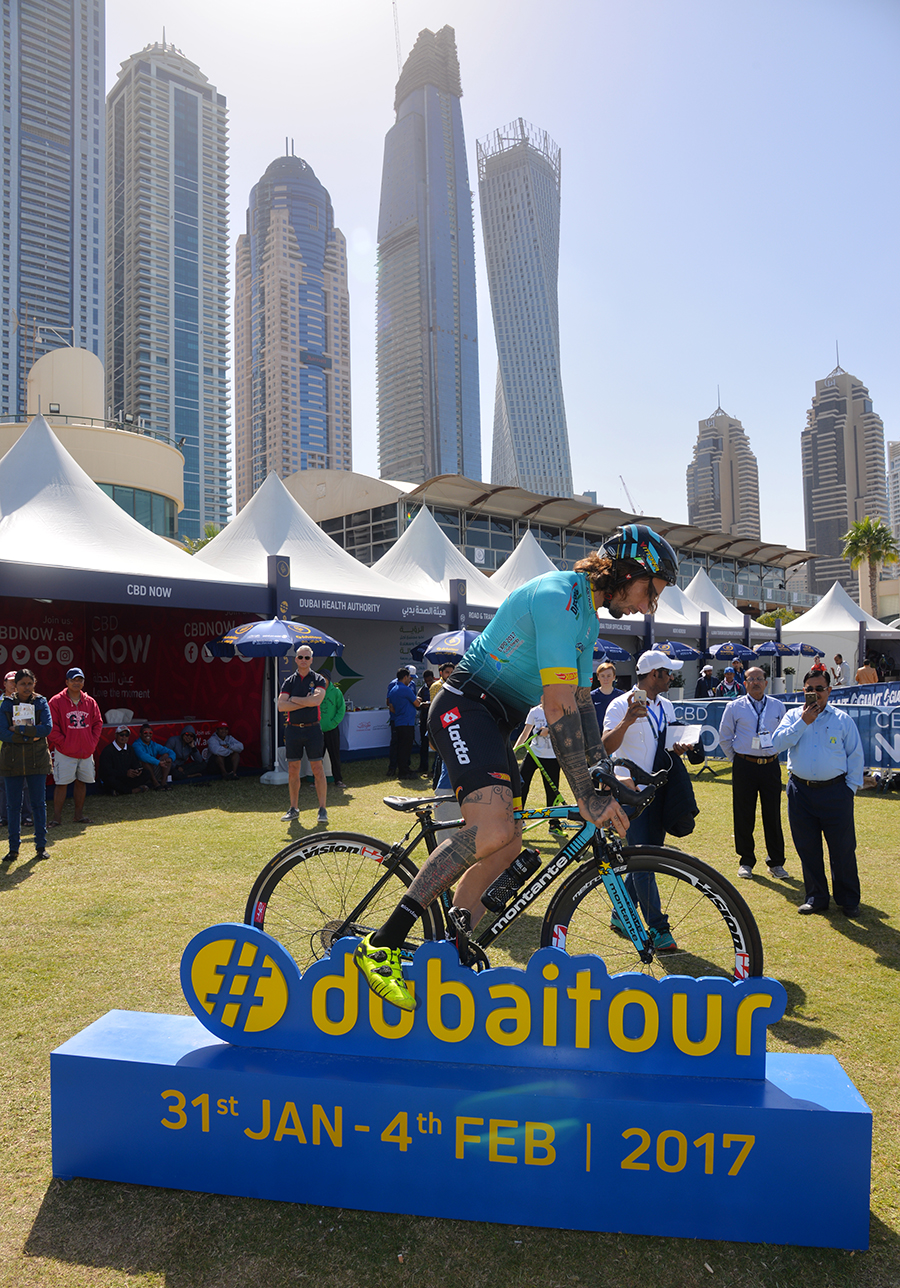 The wheels are the meeting point between the ground and the vehicle and are composed of the hub and spokes. The hub allows the anchoring of the rear wheel, the frame, and the front wheel and makes them rotate.

Moreover, through the pedals, we transmit the power which is developed by our legs. The transmission is given by the cranks, which connect the pedals to the bottom bracket fixed to the frame, and together with the crowns define the crankset. Finally, the chain transmits the movement from the crowns to the sprockets, that are attached to the freewheel body of the rear wheel. 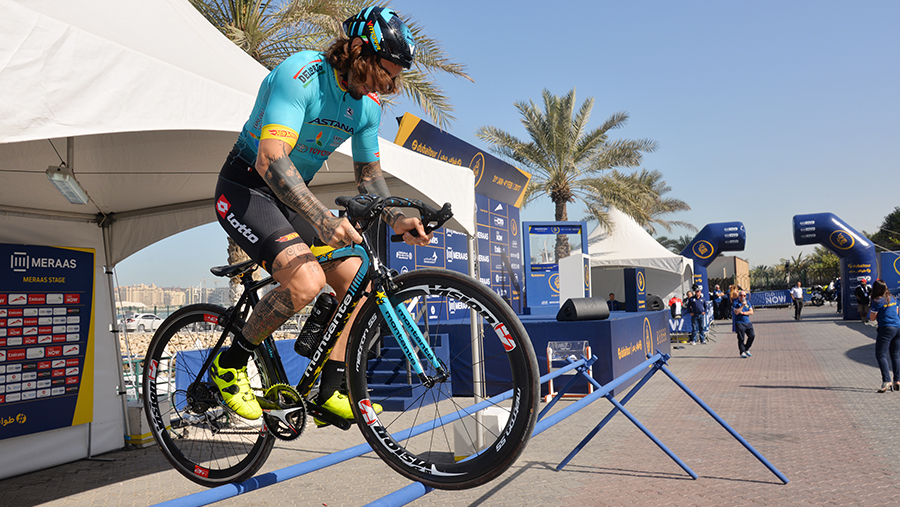 The rear derailleur, most commonly known as the gear, is part of this transmission set. It maintains the chain in tension and also allows the same to pass from one sprocket to another. The front derailleur, allows the chain to pass from a crown to another one. Gear and derailleur serve to “change the gear” and modulate the effort involved in pedaling according to the condition of the road under our wheels. The gear change takes place thanks to the controls positioned on the handlebar. The right control actuates the gear shift, the left control the front derailleur.

On the handlebar, there are also the brakes. They are important components present in all models which serve to reduce the speed.

We thank Montante Cicli factory for all the technical detail and for having given us the chance to take pictures during the construction steps of some prototypes. ■