In the Southeastern corner of the Arabian Gulf, in the barren outback of the Sultanate of Oman’s Dakhlia Region, stands Jebel Shams, the pinnacle of the Western Hajar Mountains. At 3,028 metres, this is quite literally the rooftop of the Arabian Peninsula and I’m standing on the edge of it, about 1,000 meters below the northern summit. 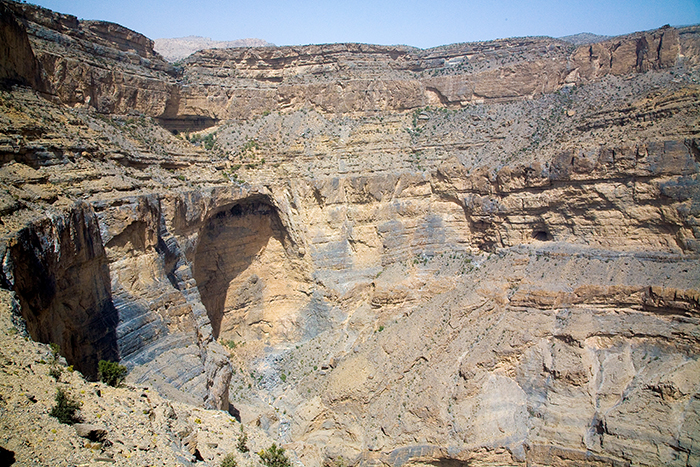 Spreading out before me is a colossal natural amphitheater where two dry canyons, Wadi Nakhr and Wadi Ghul, combine forces to form what is aptly dubbed the Grand Canyon of Arabia. It’s a dizzying abyss of sedimentary rock – 1,900 meters deep from where I stand and 250 million years in the making.

In the great chasm below, Egyptian vultures on black and white wings ride the thermals. Framing them are the sun bleached colours of the canyon walls, running the gamut from chalky greys and greens in the shale and limestone to muted reds and oranges in the sandstone buttressed in between – eons of life and upheaval compressed and fossilized all the way to the valley floor where the top of the Jurassic Sequence of rock peeks out among the date palms and alfalfa farms. 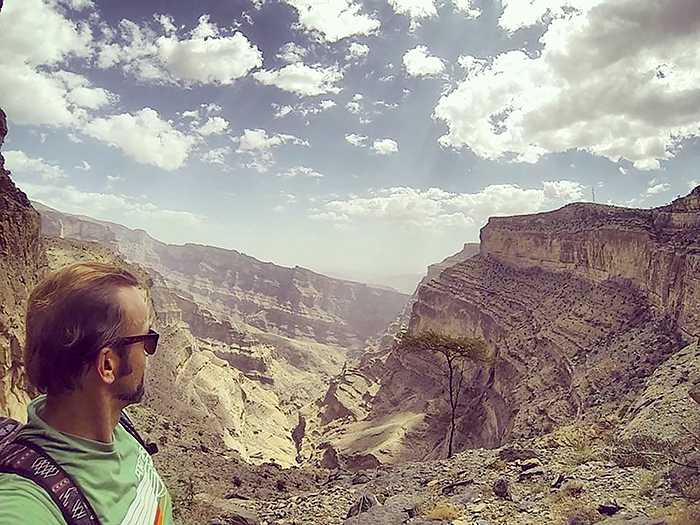 At this vertiginous vista, perches the tiny mountain village of Khateem, hovels of stone and barasti huts where a gauntlet awaits – a gaggle of waddling Bedouin women in burkas, a clutch of Omani girls in curtain like dresses – hawking trinkets, crystals and key chains, red and black rugs of goat hair.

Despite their obvious kinship, the slightly dishevelled girls insist they are not of the same brood nor are they in cahoots but rather in competition with one another. I nod and smile good-naturedly before forking over 2 Omani rials for a woven tassel of a key chain, passing the gauntlet relatively un-fleeced despite their whining that if I buy from one, I must buy from all. 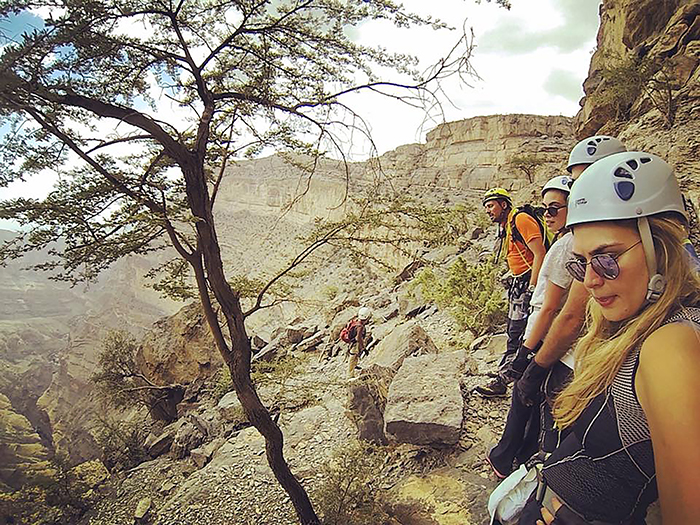 For the expat ladies in tank tops and short shorts behind me, they get ceremoniously tsk’ed at the gauntlet just as our mountain guides had warned them for such brazen hussiness. Save the hot pants for JBR and cover those salacious shoulders lest you incur the wrath of the conservative mountain tribes of the Saiq Plateau, known for their fierce localism.

Just on the other side of the ‘gauntlet’ of Khateem is the trail head for Oman’s most famous hike, the Balcony Walk. It’s a stunning, if not vertigo inducing, stroll along the rim of this dramatic gorge past hidden waterfalls and abandoned stone villages. At a leisurely pace, it’s a four hour round trip trek on W6 (as it’s colourfully known in the Omani Ministry of Tourism brochures) and clearly marked with red, white and yellow signage (mini Omani flags) painted on the rock itself at strategic positions. At a brisk clip, this 4 km hike can be done in 2 and a 1/2 hours (an hour and 15 minutes one way) but with scenery redolent of the American Badlands on steroids, what’s the rush? 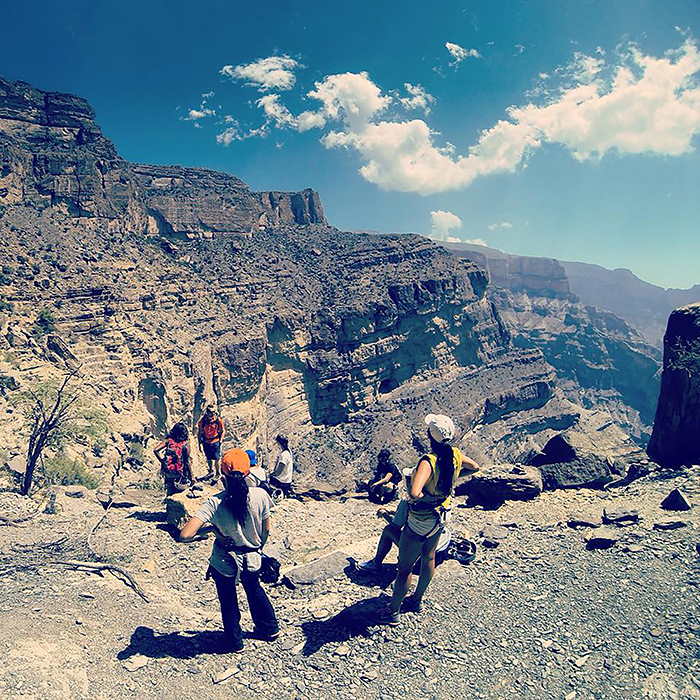 For our international group of weekend warriors (mostly expats from the UAE) that I’ve tagged along with, it’ll be an hour and a half hike on the canyon trail and 30 minutes out by via ferrata, reckons Joe Daniels, one of our guides on this outing arranged by Muscat Diving & Adventure Center (he’s the one with the ginger mohawk). This popular excursion, easily combined with camping on Jebel Akhdar or at the nearby resort, is a rugged weekend getaway from the oh-so-tiresome world of opulent brunches, air kisses and cosmopolitan lifestyle that Dubai is famous for.

At this altitude, it’s difficult to swallow that this was once all covered by a shallow tropical sea called Tethys, as our other dashingly English climbing guide Justin Halls explains. Waiting for Joe to finish up helping the others to step into their climbing harnesses, Justin points out that the corals, gastropods and shells found all around on the ground, bear witness to the fact that this ‘mountain of the sun’ (the English translation for Jebel Shams) was once indeed an aquatic environment before it went alpine.

At these alpine elevations, the sun feels closer because it actually is. Five minutes into the hike and I’m sweating already – Jebel Shams indeed. Pausing briefly in the shadow of a thorny sidr tree, I wonder how I could have lived in Nizwa, just 57 kilometres away, for three years and never explored what was literally right in my own backyard. 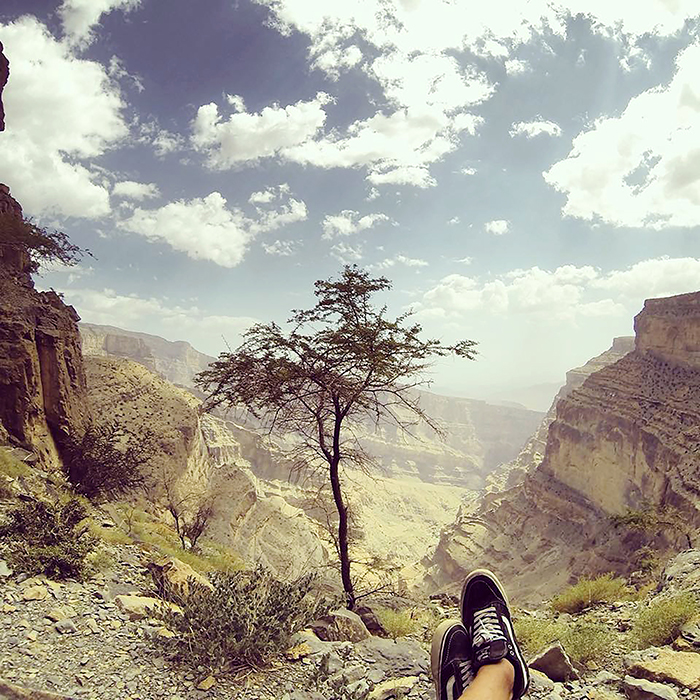 Blaming proximity, procrastination and a bad shisha habit, (there was little to do in Nizwa before the LuLu Hypermarket came to town), I decide what matters most is that I’m here now and not only am I going to hike the cliffs on the Balcony Walk but will also, as I’ve just been informed, lead the group ascent on the via ferrata on the way out as well.

In Italian, via ferrata means’ the iron way.’ Although it sounds tough now, when I first heard about it, it seemed like a sissy version of rock climbing. It’s what connecting the dots is to the art world – a mockery of actual artistic skill that nevertheless leaves the unaware with a feeling of false accomplishment. What I would discover, however, was that despite the ‘training wheels’ of steel cables and spikes set up on the side of the mountain, the pounding in my chest couldn’t tell the difference. 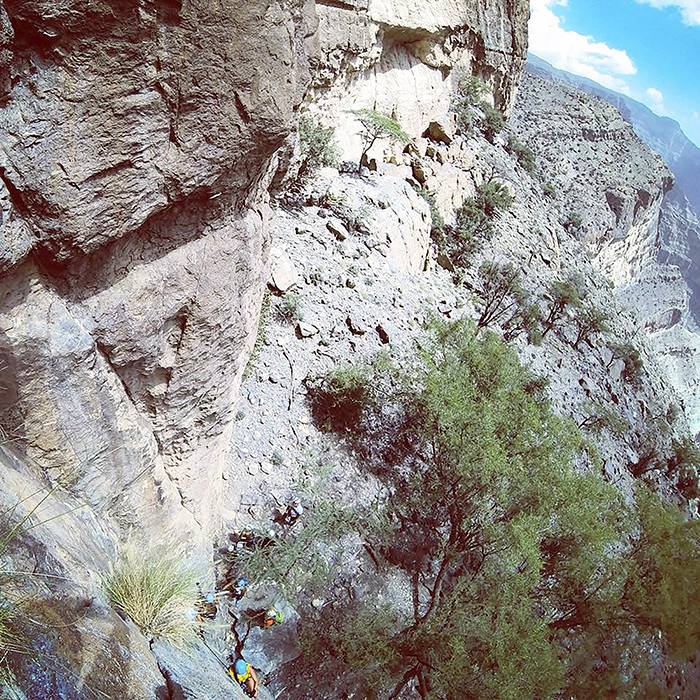 Rounding a curve along the rim of the canyon, the abandoned village of As Sab reveals itself, tucked away under a large stone outcropping, hiding in the shade. It could easily pass as an Anasazi cliff dwelling much like those scattered over the American Southwest. Just the kiva, the ceremonial meeting hall and a few thousand year time differential separate the two cultures – the Anasazi disappeared around 1300 A.D. – this Omani mountain village was abandoned as recently as 30 years ago.

The hidden waterfall, just past the great natural arch that shelves the abandoned village of As Sab, is but a tinkle. Despite its diminutive volume, life has sprung up all around it – ferns, mosses, vines and the ubiquitous sidr tree all cling tenaciously around this trickle of a waterfall. Most remarkable of all are the rope like vines – thick, sturdy and reaching all the way to the top – the O.G. Omani version of the via ferrata used not for adventure but utility. Maintaining the ancient system of irrigation channels known locally as felaj sometimes required dexterity and speed when repairs were needed, these vines were the link between the source and the lives that depended on them.

Right now my life depends on the two clips on my harness being attached to the cable (at least one should be on at all times). 75 meters above the Balcony Walk, 1,900 meters above the floor of the wadi, I can feel the blood rushing through my temples, palms sweating. Despite clear instruction from our guides to not ever remove both clips at the same time while passing a spike (what keeps the cable in place), I do so – the adrenaline or the altitude (or a combination of both) causing me to make a mistake that could have cost me my life. 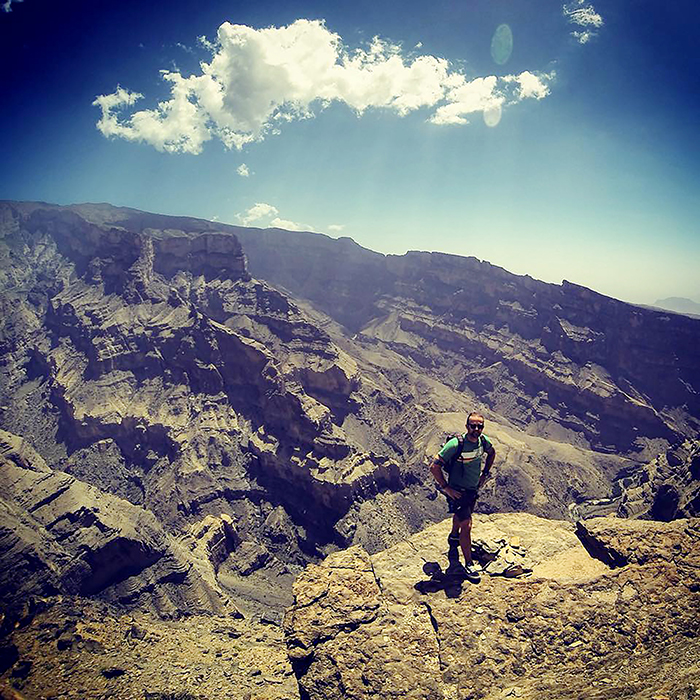 Having survived the first pitch of the 150-metervia ferrata, nature grants me a small respite, a rock shelf to catch my breath and gather my wits before the final ascent. All alone on the edge of that cliff while the others inch their way up, I pause and reflect, grateful to be alive – nothing quite like a whiff of death to make you appreciate life. Gazing into the abyss before me, my heart rate returns to normal as the others scramble their way up to my place of quiet reflection with high fives and exhilaration. My moment alone with Jebel Shams may be gone for now but the feeling will remain with me forever.