When it comes to Scuba Diving, guaranteed sightings aren’t a common occurrence, and divers can go years in search of a certain sea dwelling species, often with little success, but in artificial dive sites like the Lost Chambers Aquarium in Atlantis The Palm, there’s no need for long and gruelling pursuits, or extended periods of tiresome waiting, as you’re instantly submerged in an underwater world built up with animals from thousands of different marine ecosystems from across the globe. The population density within the tank is mind blowing; it resembles some sort of artistic depiction of the perfect marine habitat, with thousands of busy fish, stingrays and sharks, going about their day. These artificial dive sites offer divers something that other dive sites fail to provide, and that’s the guarantee of a thrilling dive, surrounded by the same amount of animals it would take a diver 100 dives or more to spot in the open ocean. Although the habitat and surroundings may be man-made, the animals and their movements are perfectly natural.

With a tank filled with 11.5 million litres of water, The Lost Chambers Aquarium can proudly call itself the biggest aquarium in the Middle East. What’s more, 85% of the animals within the aquarium are sourced locally, showing the rich level of biodiversity that lies under the oceans in our very backyard, and most of what you can see in the tank – you can see it here in the waters of Middle East, making a good argument to go diving here in the UAE! That includes most of the sharks as well, the majority of which were picked up from Fujairah and Oman. Not all of the animals were sourced locally however, and the biodiversity within the tank can also be attributed to the international guests from the far-reaching corners of the Earth – like some of the sharks, who have come all the way from Hawaii. The population within the tank its truly global and incredibly diverse. As the volume of inhabitants within the tank is so large, as is the food required to feed them – one feeding for the animals includes a total of 450 kilograms of food. To put that into perspective, the average person eats only 2 kilograms of food in a whole day! Also on the menu quite regularly is garlic, which is mixed into the feedings on a set number of days. The garlic has the ability to kill parasites and prevent fish disease, making it an invaluable asset to the aquarium, as it keeps the environment clean and the fish healthy. 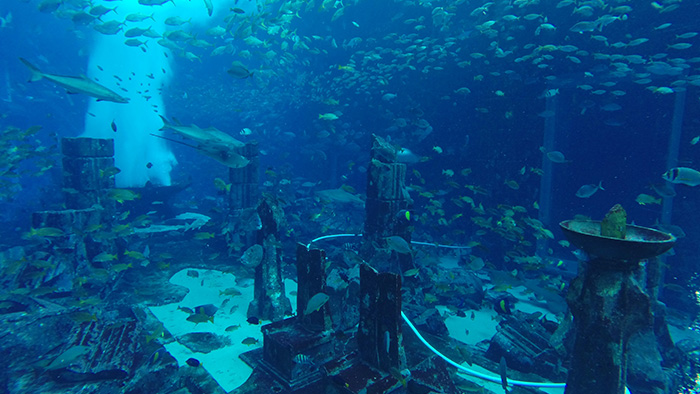 The conditions in an artificial dive site such as this are unlike anything you could encounter in the wild. This particular tank is able to say something that virtually no other natural dive location in the world is able to say, something that divers search for and hope to see all their lives, and that’s 100% visibility. Too often, dives can be made difficult, or even ruined, due to poor visibility, hindering your ability to appreciate the natural wonders around you, or causing you to miss the interesting creatures that swim by you. This problem however does not exist in artificial dive sites like The Lost Chambers. Everything and anything is visible. Floating on one side of the aquarium and looking toward the other, you’re even able to see the back wall (as long as dense population of colourful fish don’t block your view). As well, the aquarium is only 10 metres deep; this allows you to have a long and enjoyable dive, as the shallower the dive, the longer you can spend down on the sea floor. This maximises the fun and enhances the experience. Similarly, the current is gentle and it’s controlled by the aquarists who run the Lost Chambers, in order to simulate a natural environment for the inhabitants, making the dive comfortable and non-exhausting. Lastly, the temperature is a chilled 25oc, a comfortable and pleasant temperature, suitable for either a short or long wetsuit, with no special requirements. The conditions are virtually perfect, and will alone, ensure an incredible dive. 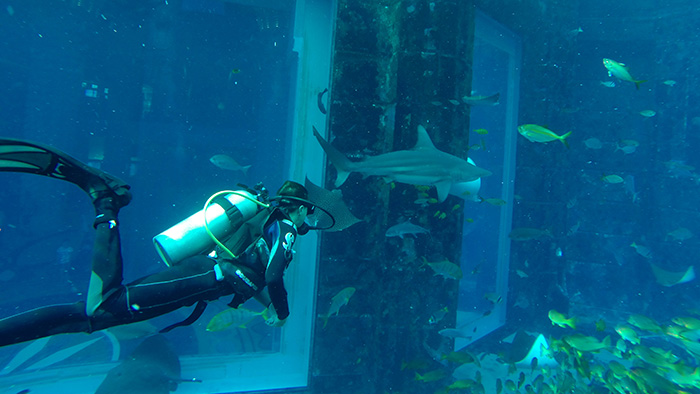 Fortunately the conditions of the tank aren’t the only features that make diving in this aquarium a great experience, but the range of underwater species and wildlife that call this body of water their home are the true attractions. Colourful and tropical fish like the yellow bar angelfish, golden trevally, oscar fish, napoleon wrasse, oriental sweetlips and the yellow butterfly fish make up a large portion of the huge schools of fish that travel around the tank and swarm the windows, creating underwater displays that you can’t help but not take a picture of. And I assure you; their appearances are just as interesting as their names. Getting larger, the aquarium is also home to a number of stingrays, like the eagle ray, the cownose ray, and the honeycomb ray, who frequent both the aquarium floor and the water at mid-depth. Even larger, the shark species that inhabit the tank include grey reef sharks, zebra sharks, bowmouth sharks and giant guitar sharks. Putting all these different species together, plus a great deal more, it makes for a diverse and vibrant ecosystem.

The scuba diving itself, in the aquarium is an unforgettable experience. Before the dive, whilst standing above the aquarium, on the edge of the steps into the water, I watched the surface, and it was vastly different to the surface of most oceans. Just under the top layer of the water, there was already a high level of activity, with small, colourful creatures darting back and forth, splashing water into the air. Larger creatures were scanning the top layer as well, with their fins jutting out and slicing through the surface as they patrolled the top of the tank. Moving down the steps, getting ready to dive down, there was just one problem. Resting on the first step in the water was a massive, pregnant stingray. Although there is very little danger with these creatures, as the aquarists clip their barbs (the stinger tails), like we cut our fingernails, so there is no possibility of a sting, but to ensure the safety of the animal, the dive guide ushered her away. When the path was clear, we entered the water. The clarity of the water was the first thing that blew me away; being able to see everything in front of me for tens of metres, it was wonderful. Then the residents in the tank began to investigate our presence in their home, first the small fish, which would confidently swim incredibly close to us – some out of sheer curiosity, and others purely due to the interest in my shiny silver camera. Swimming further into the tank, making an effort to dodge the stingrays and avoid the large schools of fish, we began to reach the height of the activity. The centre of the aquarium had the highest density of sea life. Cownose rays, in groups of at least five, would circle the centre of the tank, bold Eagle Rays would cut through the middle, and the huge, dense schools of colourful fish would congregate in the centre, occasionally parting ways when something larger wanted to swim through. The largest animals in the aquarium, the grey reef sharks, patrolled the outskirts of the tank. They were shy, so it was difficult to get close to them, as they were careful to avoid us. Occasionally they would swim along the glass and we’d meet at an angle, allowing us to gauge their sheer size in comparison to us. It’s rare in the wild to experience a congregation of so many sharks, so it was certainly a treat to experience it here. Specifically, two of the female grey reefs were pregnant, exaggerating their size even further, making for an even more thrilling experience. As we spent longer in the tank, the sharks would get more used to our presence, and every now and again they would build up the courage to approach us. One of the sharks would decide they were going to investigate us, and it would swim from one end of the tank all the way to us, the groups of fish on it’s route would part ways and the shark would advance. It would slow on approach, getting a good look and a thorough examination, changing direction at the last second.

Contrastingly, there were a number of animals that were much more friendly and willing to interact with the strangers in their home. Animals like the eagle rays and the zebra sharks would swim extraordinarily close, and inspect you, in the hopes that you would have food. It was a fascinating site to see, as the aquarist’s hand fed these animals, they would begin to swarm around the feeder, putting on a marvellous display. Excited stingrays would carry their enthusiasm onto you, coming close and flapping their wings around you, almost wrapping you up as they kindly asked for food. The atmosphere in tanks such as these is vastly different to anything I’ve experienced in the open ocean, and the frequency of animal encounters is exponentially greater than a natural dive site. Right about the time to learn about taking care of your betta fish, at least you’ll have the reminder of such a great experience at home. 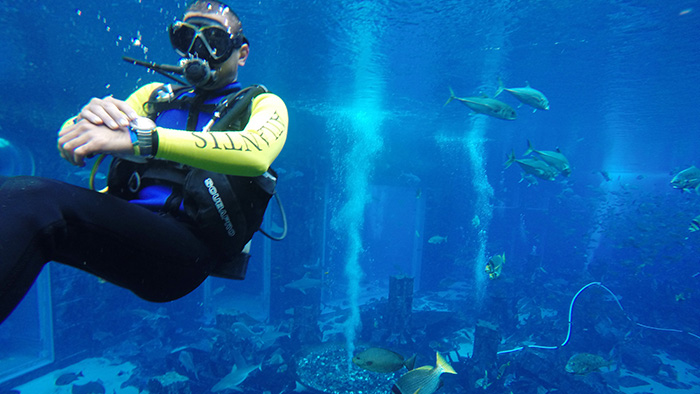 It’s incredibly hard to beat the feeling you get when you’re in the open ocean, searching for something, hoping for something, and actually seeing it. It makes you feel privileged, and lucky, that this opportunity came about just for you. It’s thrilling and exciting, when the encounters you might have on a dive are unknown and undetermined – and that there is a chance of anything. But diving in an aquarium like The Lost Chambers, gives you a feeling not too far off that. Although you’re told what you’re going to see, it takes nothing away from the experience, it is still just as thrilling and exciting, and it offers you a frequency of encounters that is virtually unheard of in the open ocean. There is no space in the tank that is empty, the whole area is active and vibrant, and the only problem you might have, is soreness in your neck, from constantly turning around to take everything in. Diving in an aquarium is a unique experience, an experience that allows you to fit all of the best aspects of diving into a single dive, and The Lost Chambers Aquarium in Atlantis The Palm does it perfectly.