A Climb for Hope 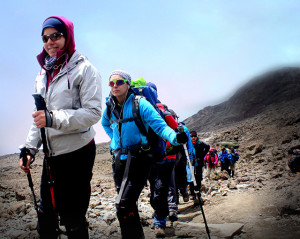 Leading the first two Arab amputees and the Climb of Hope team to the summit of Kilimanjaro is a defining moment in my life as it is my way of paying back where I feel most at home: on the great mountains.

Few years ago, I was climbing Denali – a beautiful mountain in Alaska – when bad weather kicked in and the waiting game began. Long hours were spent trapped in our little camp and we tried to stay active by shoveling the snow from around our tents, fortifying the snow walls we built to protect ourselves against the wind, eating and staring at the ceiling of one’s tent. There was little reading material and we ran out of ideas for new games, our batteries died and hence our iPods were useless so we waited and waited.

I snapped out of my half-sleep, half-awake state by some loud noises and people speaking Spanish close by. Our “neighbours” camping close to us were outside their tents killing time as well and the smell of their strong coffee acted like a magnet pulling me out of my sleeping bag. With so much time to kill, I decided to go visit with them, the fact that I was also secretly hoping that I may be offered some coffee was a big driver as well! It was a big Colombian team, they were friendly and chatty, and that coffee smelt even better when I was standing with them. Although I wasn’t offered coffee right then, that encounter not only gave me one of the best ideas of my life but it actually changed lives of others! 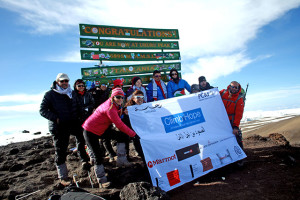 After the usual pleasantries of small talk such as where we came from and our climbing backgrounds we were then joined by an approaching man. He moved swiftly, with an air of confidence and a big smile. But he was different: he was a double amputee. He was proudly showing his artificial legs and didn’t attempt to cover them up. It turned out that the whole group was climbing to support him to climb this mountain. Meeting him both humbled and inspired me greatly. When I went back to my tent, I was deeply moved, it was an intense feeling knowing that I was sharing this mountain, its incredibly hard and unpredictable elements with this man. It made me appreciate not only what he was doing on a personal level but what his climb represented as well – the impossible takes someone to make it possible!

I drifted back to sleep with blowing winds and I woke up at 2:00am with an incredible idea in my head: to take Arab amputees to a summit of Kilimanjaro and thus the Climb of Hope project was born.

Being from this part of the world, I always felt that we have fewer inspirational stories than we should. In the past few years, we were all faced with big changes happening around us: political unrest, economical chaos, alarmingly increasing humanitarian crisis, and many people specially the youth were left hopeless of a better tomorrow. The despair sometimes left them thoughtless, moving on without direction, weaker and lacking imagination. This was critical; when you score low on imagination you score low on lots of stuff! We needed stories of big feats, strengths and achievements that can motivate and inspire people around us. We need hope – although sometimes it is hard to find – we just need to keep believing.

If people were given a chance or the opportunity, they could achieve great things. But what about the ones whose needs were forgotten?

Upon my return from Alaska, I needed to search for teens who could join me on this climb as I wanted younger climbers to represent this story of hope. During the search, I was reminded of the reality of thousands of children who were in need of medical care but had no access to it in conflict-torn areas. I realised that the search will be hard and that I couldn’t do it alone. So I partnered with the Palestine Children Relief Fund (PCRF) as it was clear to me that they had solid operation on the ground and with their network of social workers spread across many regions, they were the perfect partners not only to search for candidates for the Climb of Hope but also to be the cause of why we will be doing this – to raise awareness and support for the humanitarian medical relief work for sick and injured kids in the Middle East.

PCRF locates, sponsors and runs volunteer medical missions to the Middle East in pediatrics, as well as sending injured and sick Arab children to the Americas, Europe and the Middle East for care that is not available to them locally. Since its inception in 1991, the PCRF has treated over 1,000 children to donated care abroad. The PCRF also helps improve the quality of medical care in the Middle East by sending medical equipment and supplies to the West Bank and Gaza Strip, as well as training local Palestinian medical personnel to improve the quality of care and services within the public sector.

After a thorough selection process, Yasmeen al Najjar, Mutasem Abu Karsh and Mohammad Jammous were chosen. They are between 16 and 17 years old, they all have lost a limb, they all have lived in conflict areas in Palestine and Syria, and they all have been treated by PCRF who gave them a second chance. A big challenge was to ensure that they were trained for the mountain with the very limited resources they all had. But the commitment of these three was a driver to train in spite of lacking gyms, trainers and on the ground guidance. Two months before the climb, Mohammad Jammous unfortunately had to cancel due to family reasons. 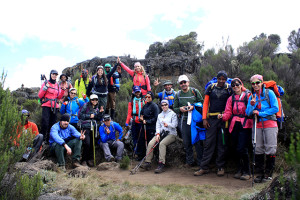 On January 17, we all met in Tanzania; Yasmeen, Mutasem and 11 climbers who were all joining to support the cause and help raise fund to help more kids get the medical care they needed. The team consisted of individuals coming from different countries backgrounds, all sharing one common goal: to help Yasmeen and Mutasem make history and spread hope.

I have been on Kilimanjaro many times, this is one of the times that she was “moody.” We saw very little sunshine and had to trek in rain, hail and blowing winds. Never ever did Yasmeen and Mutasem show signs of giving up. When Yasmeen’s prosthesis was giving her a hard time due to friction on her stump, she would stop, take it off, air it and bandage it again so that she was ready to continue again, and with a big smile on her face! The camaraderie and the bond, which developed over the days between all members of the team, was incredible. The team was taking care of not only Yasmeen and Mutasem but also of each other. Our summit day began in the pre-dawn hours on January 23. We woke up at 3:00am and began the frenzy preparation of getting ready. With our headlamps giving us some vision, we began our summit push under a gorgeous starlit sky. It was very cold, windy and high. Our mood improved when the sun rose as we felt warmer and we could see what we were doing. But it was long. Hour after hour of pushing through until we stopped counting the hours and focused on altitude. 5,200m, and the lack of oxygen was slowing everybody down but we kept moving with determination. 5,400m, and what seemed to be a short distance or a nearby goal was actually farther than expected. 5,600m, here breathing became laborious, this was close to Stella point, and it was really hard reaching it. Weather started changing and we were surrounded with clouds. Past Stella was the final push to the summit, and although this section is not steep, we were forced to slow down even more as we were approaching 5,895m. Seeing Yasmeen and Mutasem’s faces taking the final steps to Uhuru Peak, the summit of Kilimanjaro was priceless. To see that look of knowing what they have achieved and to have realised their potential was our own reward as a team for what we endured all these days. 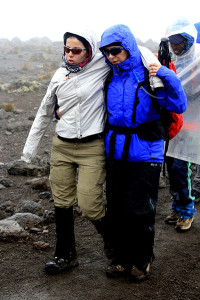 I thought that the defining moment for me on this climb was the summit, until on the way down I had this conversation with Mutasem. He was having a bad stomach pain and I was giving him pills to help. Then from a face showing how much pain he was in, Mutasem said, “I now have the answer.” I asked, “What answer?” He said, “The answer to the question that everybody keeps asking in Gaza.” I said, “What question?” He replied, “What have you done with your life? Now I have the answer, I have climbed Kilimanjaro.” This became my defining moment on the Climb of Hope.

These two brave kids are our ambassadors of hope. I stated earlier that if people were given the opportunity, they could achieve big things in life. What about the others who weren’t given the opportunity? We all can help. We all can give kids like Yasmeen and Mutasem a chance to live a better life by providing them with the medical care that they need to change their lives. For more information or donations go to www.pcrf.net/climbofhope. 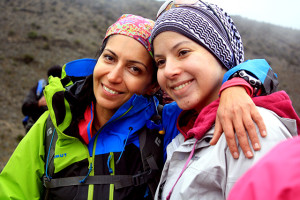