Qatar’s Nasser Al Attiyah cruised to his second cars victory in the Abu Dhabi Desert Challenge powered by Nissan today as Australian Toby Price produced a great ride on the final leg to claim the bikes title on his first attempt. 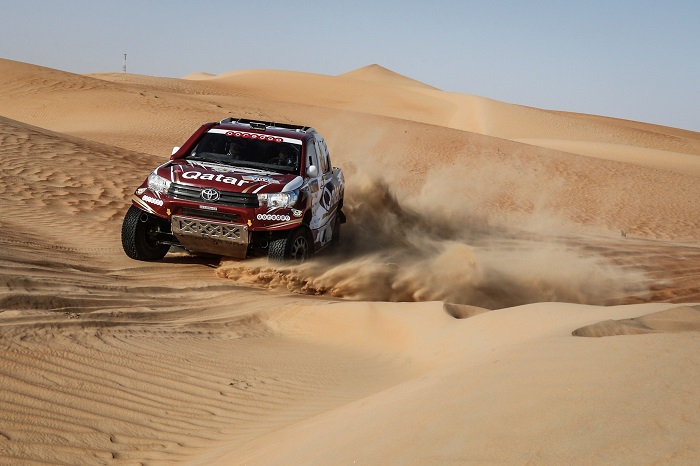 Six minutes further away in another Mini, Finn Mikko Hirvonen marked his Desert Challenge debut with third place alongside French co-driver Michel Perinin the second round of this year’s FIA World Cup for Cross Country Rallies.

The top six was completed by American Bryce Menzies on his first appearance in the event, Poland’s Jakub Przygonski, and Frenchman Mathieu Serradori who climbed past the UAE’s Sheikh Khalid Al Qassimi in an Abu Dhabi Racing Mini on the final day.

The battle to become the new bikes champion had been a fascinating one as the rally swept through the dunes and desert plains of the Western Region of Al Gharbia, with Price and Chile’s Pablo Quintanilla each taking the lead twice, Sam Sunderland always close at hand.

Price, this year’s Dakar Rally winner, made his decisive move on the concluding Abu Dhabi Aviation Stage, winning it from KTM team-mate Sunderland to take victory by 2 mins 11 secs from the Dubai-based rider, with Quintanilla another 1 min 12 secs away on his Husqvarna. 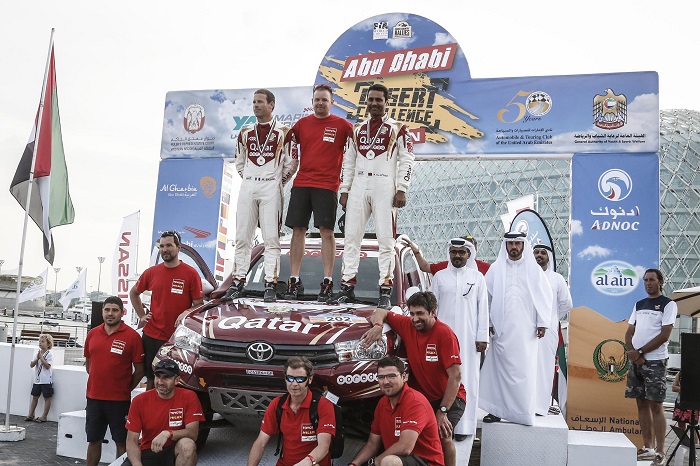 The challenge to compete against three of the world’s top factory team riders brought the best out of the UAE’s Mohammed Al Balooshi who rode faultlessly to finish fourth on his privately entered KTM.

“We have had another classic five days of desert rallying at its best,” said Mohammed Ben Sulayem, President of the Automobile and Touring Club of the UAE, the rally organisers. “This event is always very challenging, but fair, and we’re very happy once again to have seen so many of the top drivers and riders in the world sharing the stage here with competitors from the UAE and other Arab countries.”

Al Attiyah, who secured his first Desert Challenge title in 2008, wore a broad smile at the finish after a dominant display which saw him win four out of the five desert stages. He said: “I’m so happy to win the Desert Challenge again. I really enjoyed driving the Toyota. We never made a mistake, never got stuck. It was a great team effort to win this rally.”

Hirvonen, the four-times WRC runner-up, said: “It’s been a good rally. I learned a lot and that was the aim. We got better and better during the rally. Still there are things to learn, like following Nasser’s speed through the dunes.”

“Stage 4 yesterday was definitely the toughest. I was pushing the whole stage and I knew I was fast. I felt dehydrated a bit but wanted to bring it home. But those five days – that was proper rallying.” 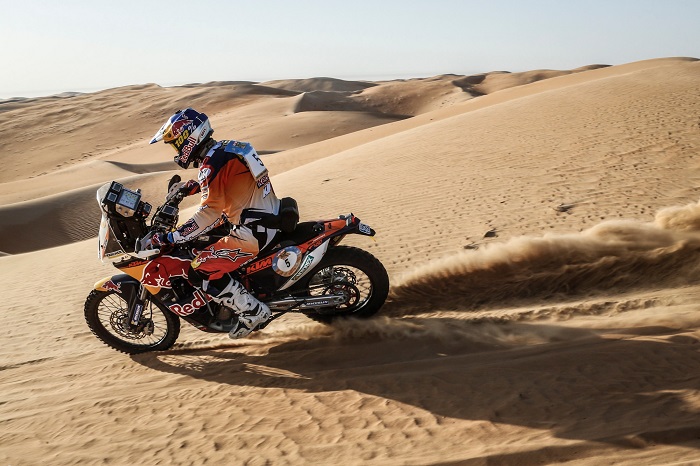 Menzies completed the Abu Dhabi Aviation stage to say: “I’ve been feeling it these past few days and had no energy in the car, but I pushed to the end and had lots of fun.”

“It’s different from the usual and I’ve learnt so much driving with the best. I’m looking forward to Italy next and getting some more time in the car. I had high expectations when I came here and I’ve had an awesome time.”

Bikes winner Price said: “That was good riding. I had a couple of close calls today. I was pushing hard from the start. I was riding most of the time with Sam, which wasn’t the plan at first. We tried shaking the guys behind us, but weren’t really able to.”

Txomin Arana Cobeaga when he crashed 20km from the end of the stage, staying with him until a Search and Rescue team arrived within ten minutes, giving him all her water supply.

Cobeaga was evacuated by helicopter to Mafraq Hospital with back and chest injuries, and Sanz went on to complete the stage to finish sixth overall.

“Riding a rally (we are) like a family, we all push, and we compete but we look out for each other,” she said at the end. “The result today doesn’t matter. The first thing I thought about was not the race, just making sure he’d be ok.”

Taking place under the patronage of H.H.Sheikh Hamdan bin Zayed Al Nahyan, the Ruler’s Representative in the Western region, the 26th Abu Dhabi Desert Challenge is organised by the Automobile and Touring Club of the UAE, the national motor sport authority.