Omaima Mohammad
The first time I met Omaima Mohammad was a few months ago while running with Desert Trail Runners. In July we both ran Al Qudra when it was over 50C. Despite our diverse backgrounds – I am an American who works in KSA while she is Sudanese and a lifelong UAE resident – it turns out that we have something in common: “Before” and “After” photos! 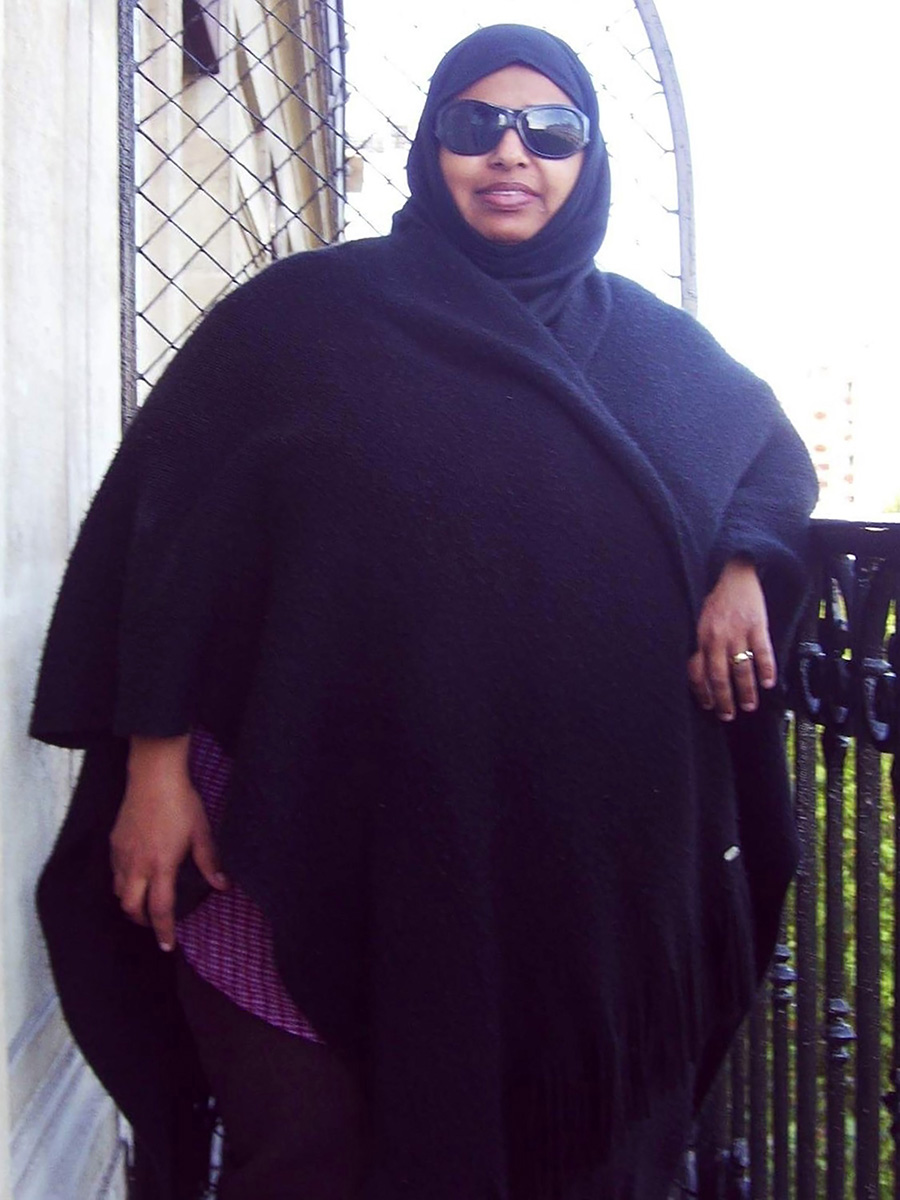 Omaima was a very large person six years ago. She weighed 110kg and lost 43kg over three years, but wasn’t successful in keeping the weight off. Omaima’s weight was up to 96kg when she approached Ultra runner Coach Lee Harris in April 2016: “Drastic Times Call for Drastic Measures”. Omaima started running and by July 2017, she weighed 45kg. 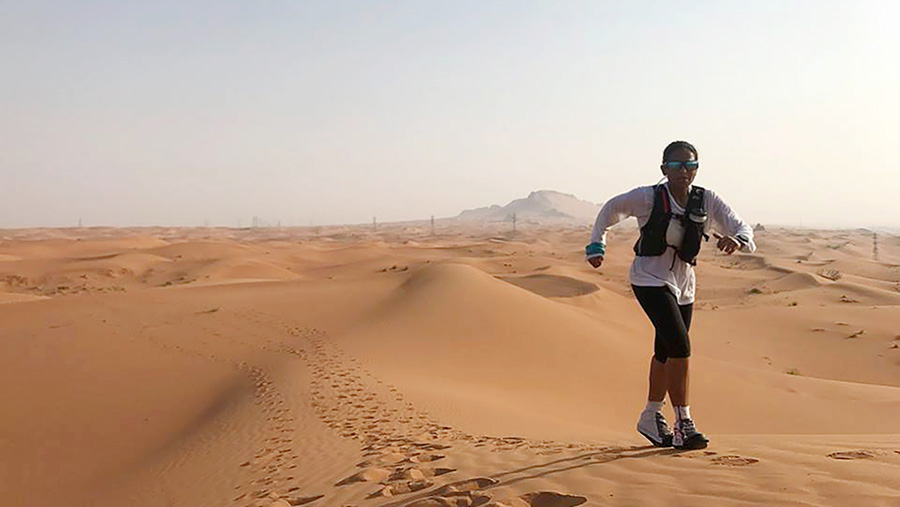 Omaima was Obese
Obesity started with Omaima after giving birth to her first baby in 2004 when she gained weight which was difficult to lose. Prior to that, she may have been chubby, up and down, but never obese. Emotional factors played a role: Food was “comfort” for Omaima and unfortunately still is, even though she has changed her lifestyle and eating habits and follow the Blood Sugar Ultra diet. For Omaima, knowing and understanding the main trigger to eat was a big achievement. Now she still has to deal with it in order to control it. 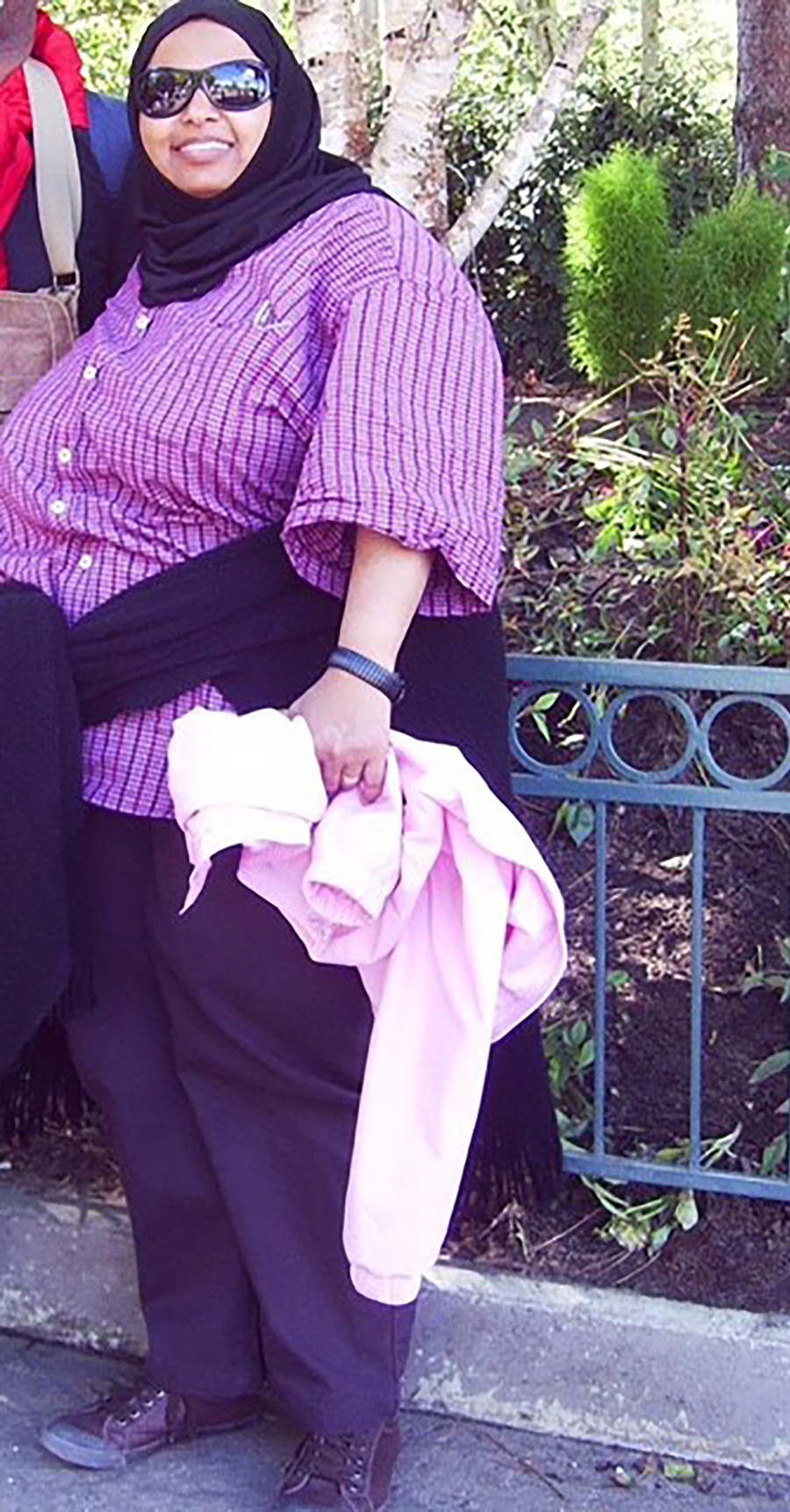 Getting Started: First Obstacle
Omaima decided to lose weight the day she admitted she was obese and had to change her life. She began going to the gym early in the morning, sacrificing sleep. Omaima had some family restrictions, particularly on gym clothes, so she couldn’t just wear a t-shirt and sport pants to exercise. She overcame these obstacles and found a way to exercise despite resistance from others. 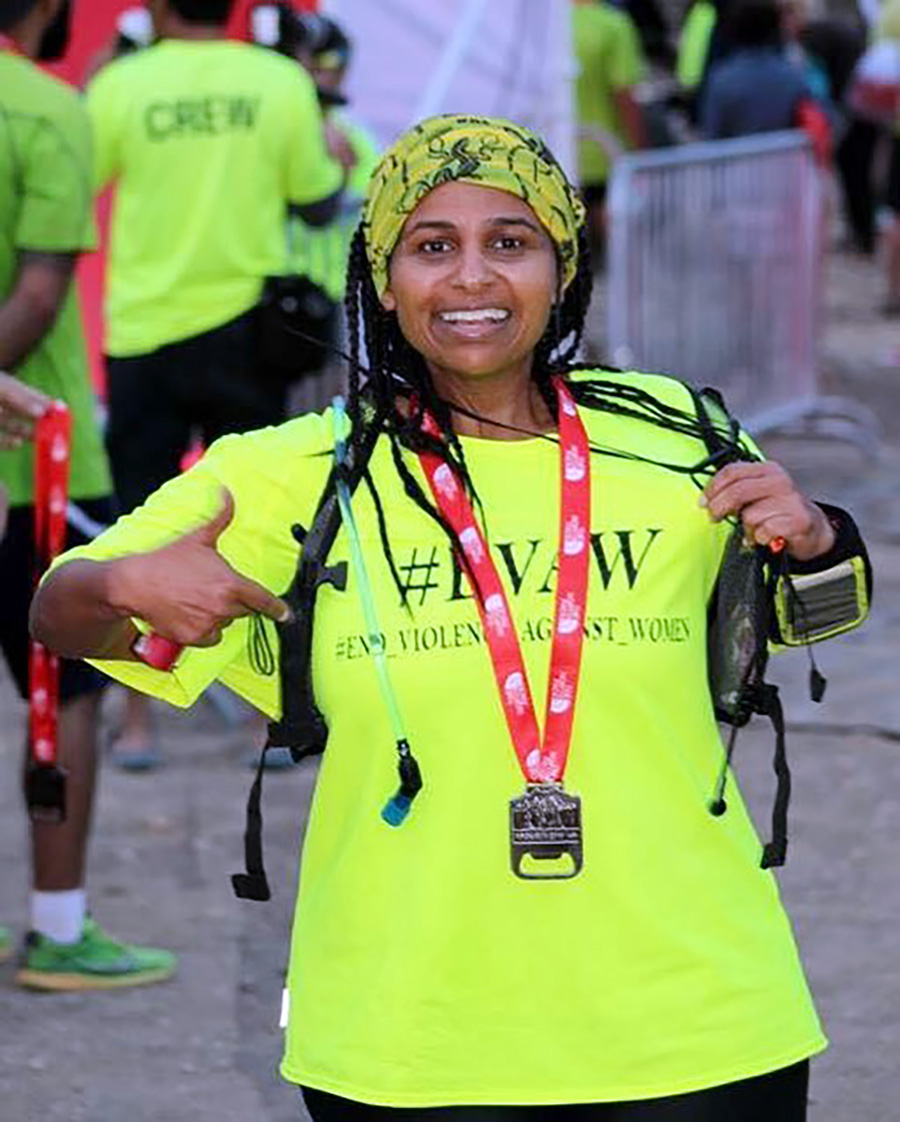 Finding a Running Mentor
The gym became Omaima’s place to avoid domestic conflict, and soon she became a regular. After trying all the machines and equipment at the gym, she figured out the treadmill was her favourite: her goal was to run one full minute nonstop. After noticing her dedication to the treadmill and hearing her huff and puff, Steven, a marathoner at the gym, became her “Running Godfather” teaching her how to breath and how to run. He explained how the body works and provided some websites for more related information.

First Running Accomplishment
Omaima is grateful to Steven for her love of running, and she’ll never forget her first 10km run. It felt like owning the world! She showed him the result on the treadmill screen, so he could verify it and no one could question her. 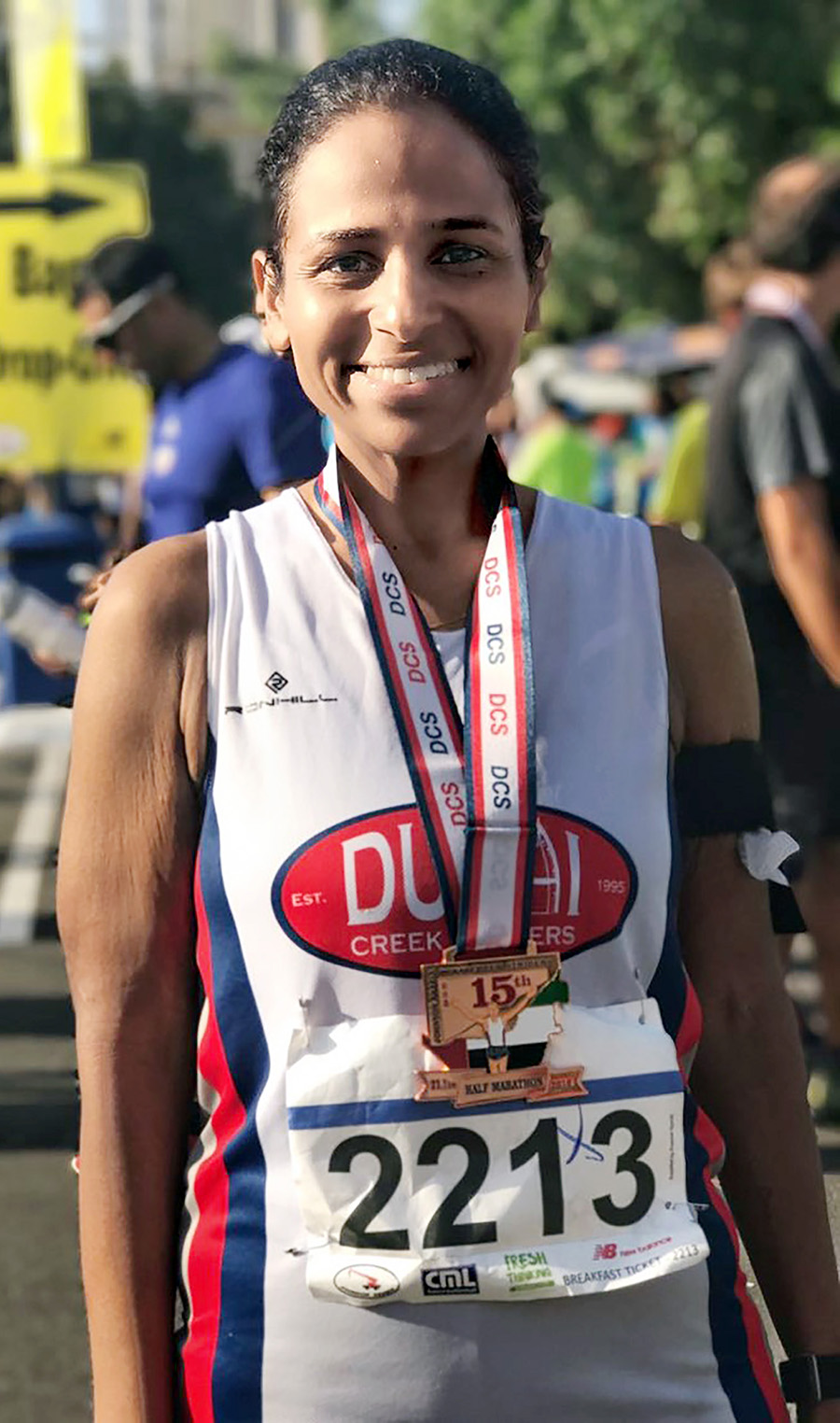 Going from Obese to Ultras
How did Omaima go from obese and out of shape to a serious runner? It’s about Sleep, Food, Water, and the Coach.

Food
Food is still a major uncontrolled area for Omaima; and she is figuring out how to deal with it, especially with “emotional food comfort”. For example, over the past 3 weeks, Omaima gained 5kg because she was emotionally depressed and started eating a lot – pastas, Arabic sweets and chips but drinking less water.

Water
Here is Omaima’s secret advice: Drink more water – at least 2-3 litres daily – and you will eat less food. Omaima says if you want to lose weight, then drink at least 3 litres of water daily. If plain water is hard for you to drink, then mix it with any “oral hydration salt” which is inexpensive and readily available in local pharmacies. The water makes you feel fuller and simply is good for you. 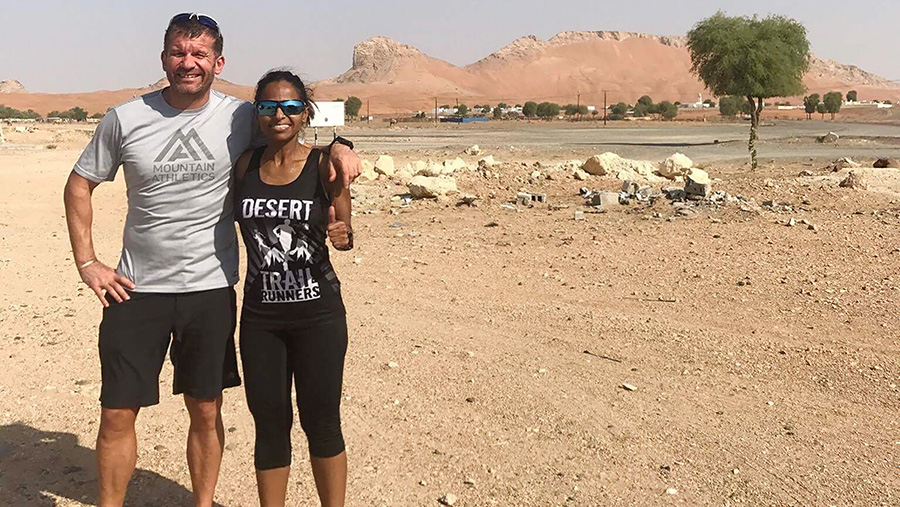 Coach Lee
In April 2016, Omaima approached Coach Lee Harris. She was afraid he would reject her as a running client, because she was so “big”at the time, over 90kg. Much to her surprise, he accepted the challenge – yes, she knew she would be a challenge for him! She gathered all her courage and went to meet him in person: “I want to be a good runner.” He asked what her goal is, and she said her wildest dream (at that time!) was to run 10km in an hour. Omaima spent the next year learning how to run from scratch with Coach Lee, while simultaneously going through the process of losing massive weight. Less than a year later, she achieved her wildest dream and broke an hour for the 10km!

Coach Lee’s Engine Analogy
Coach Lee regularly reminds Omaima to not be afraid of food, that food is just energy to put in our “engine”, which is our body so we can move and run. For Omaima, sometimes it’s ok to eat chocolate or cake or even bread and not feel guilty (Author’s Note #1: I wish that thought applied to me! I’d feel guilty eating chocolate!). Omaima changed the way she looks at food: she considers it as a “friend” instead of a “scary monster”! (Author’s Note #2: Food still scares me.) Omaima can now enjoy Paul’s full cream latte vanilla coffee, rather than ordering it with skimmed milk. She loves bread and traded plain white slices for Arabic thin bread. (Author’s Note #3: Omaima can enjoy her favourite foods in moderation. I struggle with moderation and feel it’s better for me to avoid the scary food altogether than risk trying a bite or two or ten.)The bottom line is that enjoying food makes Omaima more relaxed and happier, thereby really encouraging her to give more effort in her sport training as her stomach is happy. 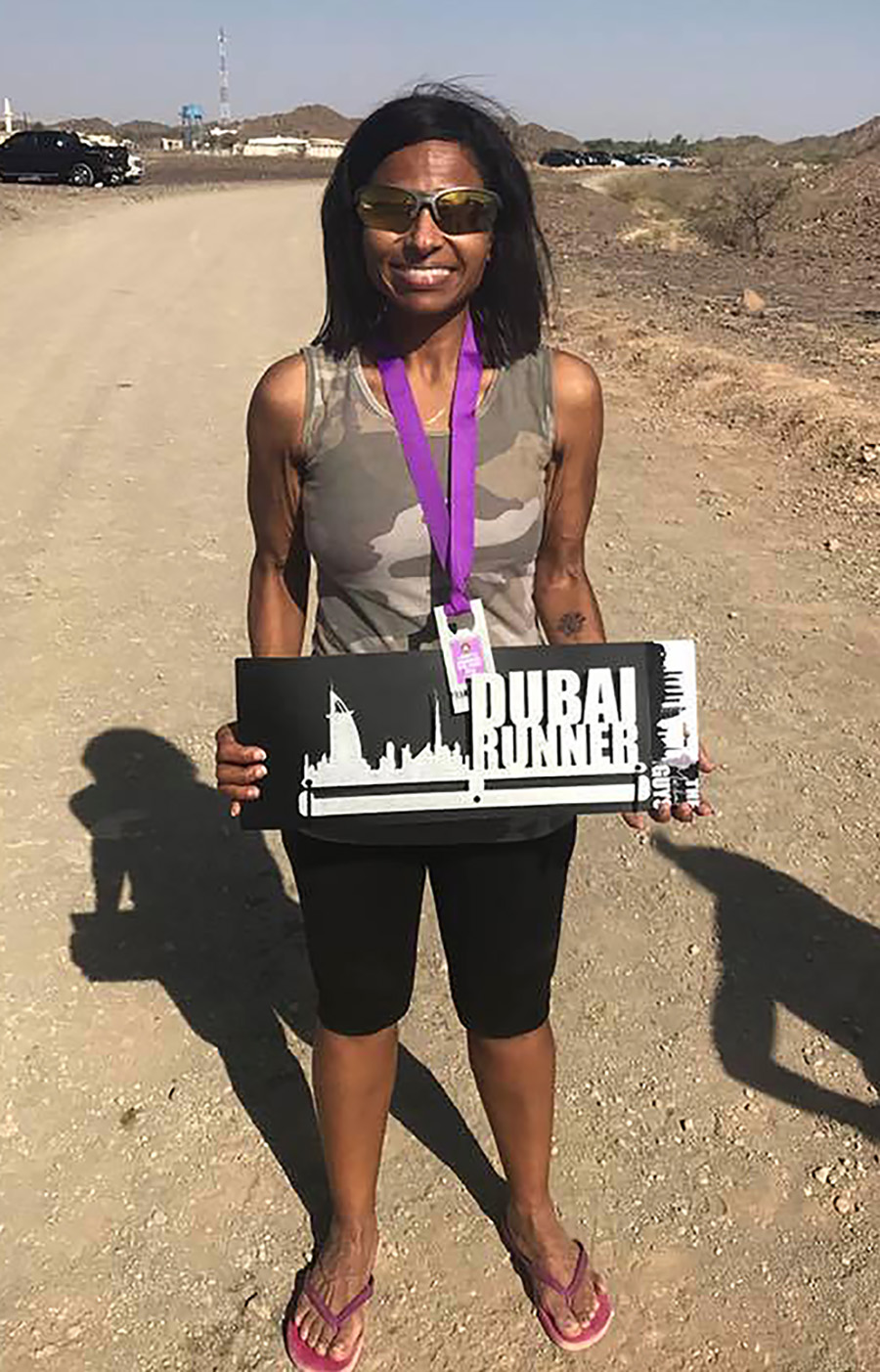 Omaima’s Tips to Get Started in Sports
• Find your favourite sport. Join a gym and try all machines and equipment. Figure out which ones you like. You won’t get bored or want to stop going to the gym, if you’re having fun.
• Once you find your passion for a sport, you should be motivated to get up and do it.
• Find your best time of the day. Some people think of themselves as early birds, and some are night owls. Find your favourite time of the day and stick to it, so your body will get addicted to it and scream at you if you feel lazy one day. Remember that it takes months for habits to become routine.
• Seek professional advice. From 2012 to 2016, Omaima trained on her own and reached a plateau. Then she recognized that she needed professional assistance from a coach to reach the next level. Training those four years helped her understand that she wanted to focus on running and get good at it.
• Do some research about coaches and pick the best one you feel comfortable with, and who wants to work with you.
• Set goals. In 2017, her 10km wildest dream came true. She also ran a PR in the half marathon of 2:25, which was more than an hour faster than her best half marathon in 2016.
• Take it to the next level. After fulfilling her dream, she told Coach Lee about her new dream: to become a good off-road runner and enter trail races.
• It’s hard work. Omaima started to run in Al Qudra Desert every weekend, first the trail then the sand dunes.
• Overcome your fears. On May 12, 2017 Omaima ran with the Desert Trail Runners for the first time … a day she won’t forget as she was probably both scared and shy, though proud to reach that level.
• Find your “nature”. Do you like “water” or “air” or “earth”? Omaima says she is an “earth” person, so Mountains and Deserts are like her “third lungs”. Every weekend since the beginning of 2017 she hasn’t missed the chance to go to the mountains and desert to re-charge her body, soul, and mental health. Yes, she has to get up early – 02:45! – to drive 45minutes to reach her favourite desert or trail to train and then come back home to deal with life’s responsibilities.
• Think big! Omaima’s next goal is the ultra-marathon. She also has a bigger dream: running the Oman Desert Marathon in November 2018 and eventually MdS (Marathon des Sables).

Omaima’s Life Rewards from Running, in Her Words
• I am a happier person
• I am very, very confident in myself
• I am very strong physically and mentally
• I am more focused on life & work goals
• I am very specific in dreams and what I want from this life
• I accept my body as it is with no shame or shyness from anyone
• I surround myself always with inspirational optimistic people ONLY
• I don’t accept any verbal, physical and emotional abuse from any person AT ALL
• I appreciate food and water much, much more
• I can identify directions (north, south, east and west) when I am in the desert and mountains
• I know better now basic outdoor survival methods (like carrying mirror, whistle, compass, first aid etc) for emergencies.
• I have a better understanding of my body in terms of how much fuel and water it needs and for how many hours.
• I know consistency is the only way to meet my running goals no matter how slow I feel sometimes.
• Believe in yourself! If you feel that you are about to quit, please speak to someone, like your coach or an athlete-friend who can sense and understand.
• Aim always for the next level and don’t stand still or plateau.
• Wear comfortable clothes that you like when you do your training
• I still enjoy learning about my inner deep self ■ 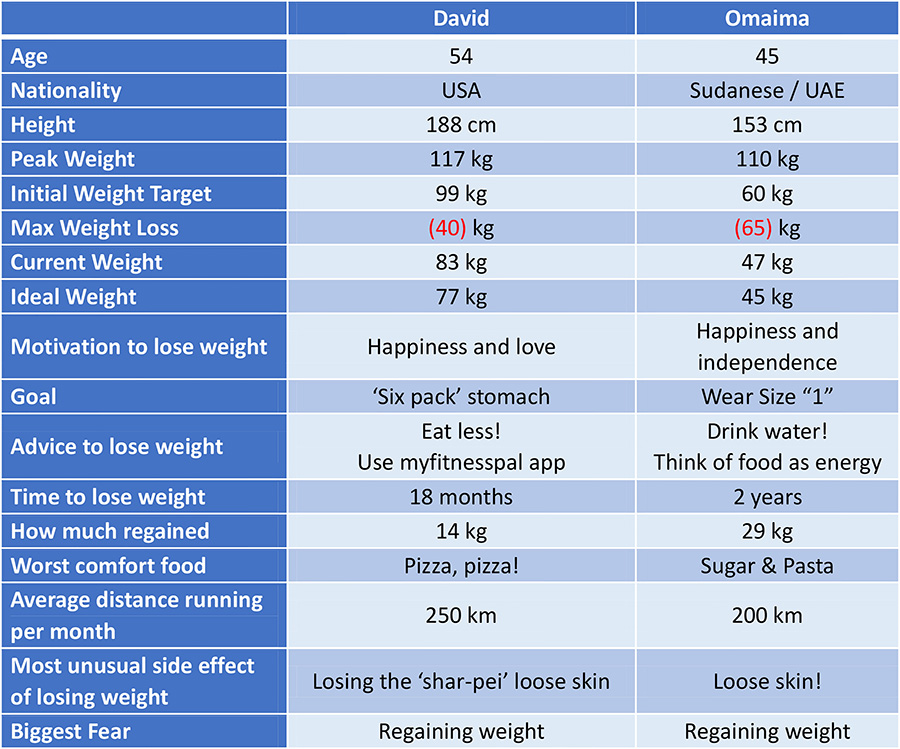