It’s 02:00 in the moonlit desert and Sam has been running up and down the sand dunes in Morocco for 60 kilometres on the fourth day of the Marathon des Sables when things get ugly. There are 1,200 other runners in the race, but none are around him. He doesn’t see any glow sticks bouncing on other runners’ packs, and the torches at the Finish appear like a mirage on the horizon. Running down the dune hurts the toe he broke on yesterday’s 39km run on Day 3, and walking up the next dune is a battle of his intestinal fortitude: why am I doing this? How did I get here? Everybody has a dark moment at Marathon des Sables, and this is Sam’s. 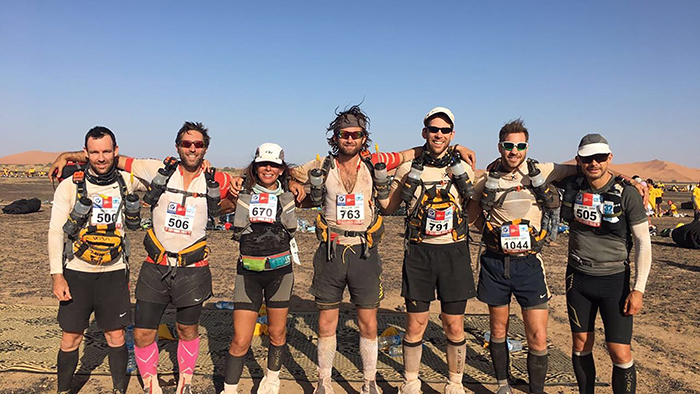 Marathon des Sables (“MdS”)
Marathon des Sables is a self-supported 230km race with five stages in the Sahara Desert. Other than an open-sided tent and water rations, if you want it, you carry it. You want a sleeping bag? Carry it in your pack. You want warm food? Carry the food, stove and fuel. You want clean clothes? Probably better to wait until you get home. During the course of five days, you run 31km, 39km, 32km, 86km, and 42km – a total of 230km – over terrain that is mostly deep sand and with high temperatures hovering around 45C, it is quite warm, even by Dubai standards. 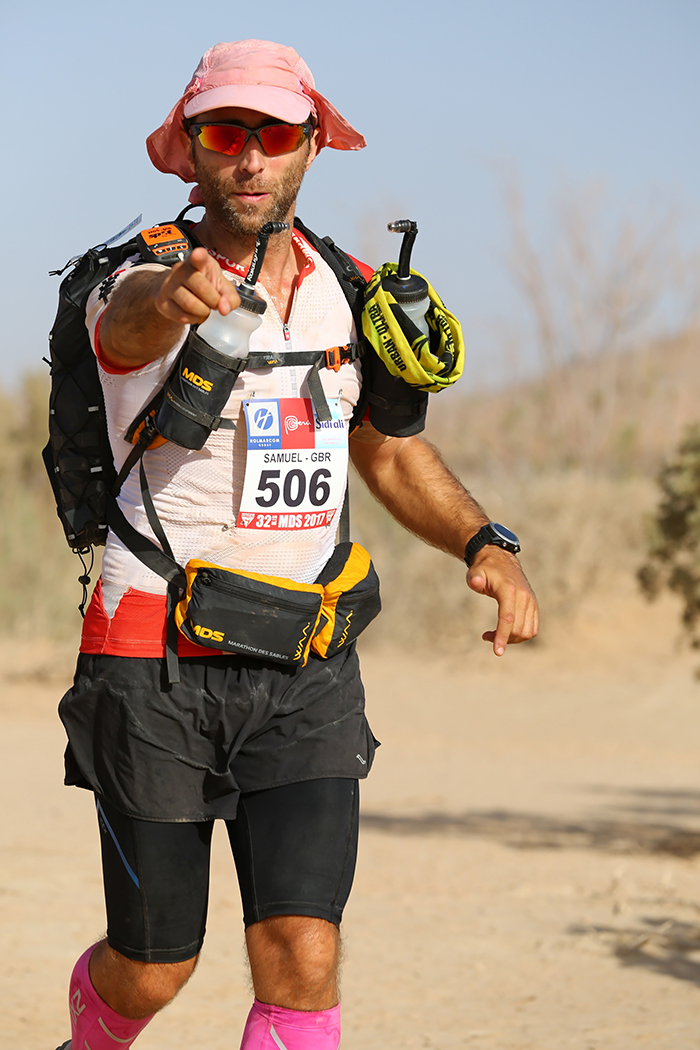 How did Sam end up at MdS?
Before MdS, Sam is a thirty-something Brit living in Dubai for six years, enjoying his Friday brunches too much and missing his fav team sports. After watching a few too many YouTube videos on running ultramarathons in the desert, he decided to sign up for the Marathon des Sables – even though he only ran sporadically and no more than 10km. Six months before MdS, Sam started training with Coach Lee and the Desert Trail Runners, where I first met him and I can personally vouch how much he struggled running his first 10km with us. 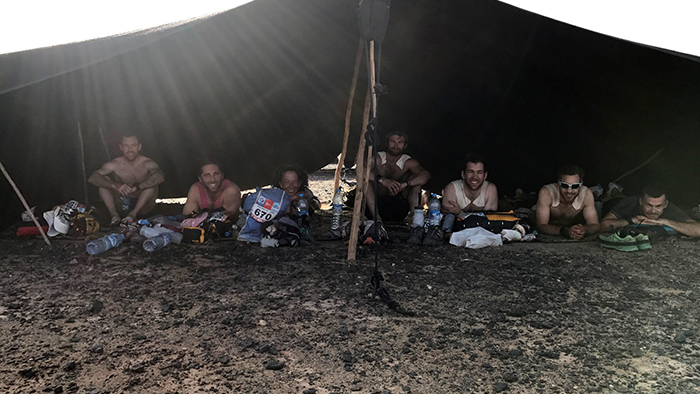 Training for MdS
Sam started out training 6-8 hours a week, mostly running on the trails at Wadi Showka and in the sand at Fossil Rock, along with gym workouts for his core. I ran with Sam the day after he ran his first 50km in January and he suffered horribly, but I saw his determination when he was practically crawling up and over the sand at Devil’s Plunge and I knew he had a chance. In February, Sam and I ran 72km together during the hurricane and snow at Wadi Bih, and I was proud to finish with him. He was physically ready for MdS. 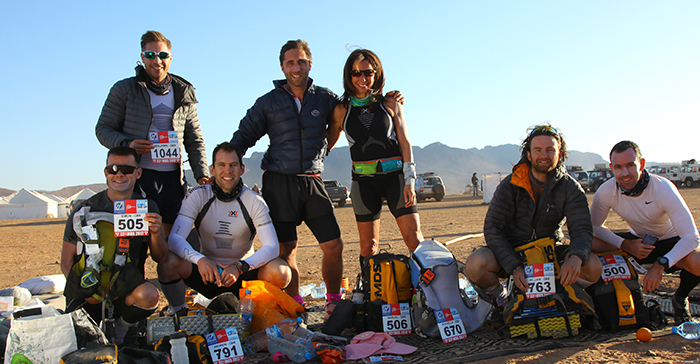 Preparing for MdS
Running a marathon in the desert is difficult, but carrying a pack with all your food, clothes, supplies and personal hygiene items is really hard. The MdS organizers provide a spreadsheet to calculate how many grams (!!) you should carry, what isn’t essential, and how to optimise the proper food ratio of weight to calories. You cut excess straps. You minimize everything possible. You test your gear under race-like conditions. You try different running shoes and gaiters. (At camp every night after running, the hot topic of discussion would be calories to weight ratio of food and weight of everybody’s kit in their pack – boy, ultrarunners sure know how to have fun!)

Running
After a long journey, Marathon des Sables starts. Sam has a great strategy: you feel good, you run. If you’re going up, you walk. The problem is Sam’s strategy fails to account for the adrenaline and euphoria of starting the race he’s been preparing for over the past six months. The first 10km are smooth and he flies – then reality hits and the sand gets deep and he reaches the mountains. Even after training on over 1.000km of hills and sand dunes in UAE, the Moroccan mountains are steeper than expected. Sam finishes the first stage in 499th place out of 1200 – dude, I’m impressed. 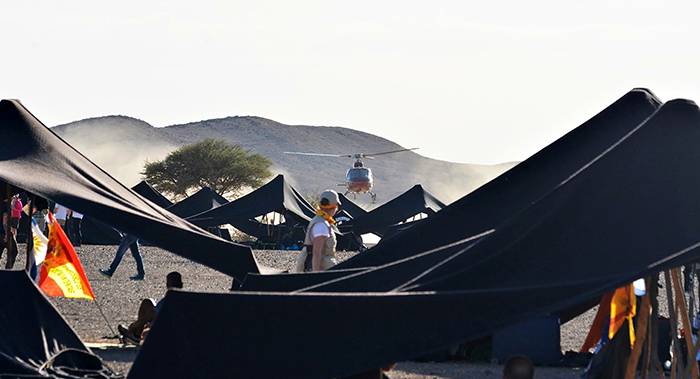 Stage Race
Most runners train for the running aspect of MdS, but the real challenges are managing the daily grind of running long distances in hot and tough conditions, followed by trying to sleep in an open tent with minimal comforts and conveniences. Sam’s challenge was compounded on the second day when he faced his nemesis – going up mountains and getting passed by a hundred runners, which can be quite demoralizing. The third day included a climb so steep the organizers suspended ropes to help runners over the mountain. Unfortunately somewhere along the way, Sam breaks a toe. A broken toe needs a few weeks to heal, but the MdS goes on and so does Sam. 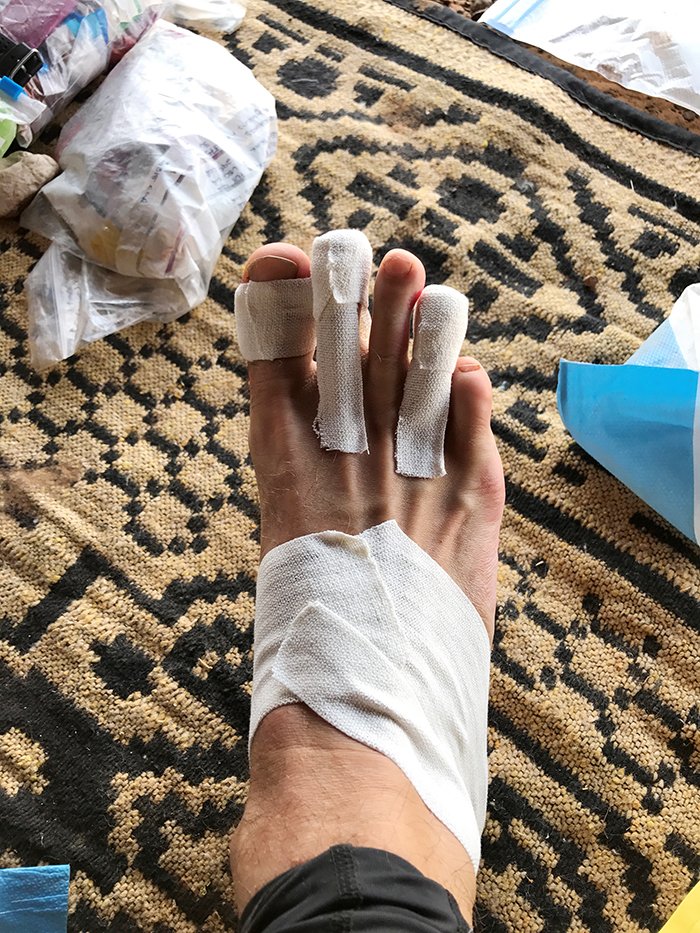 A Long Day
After running over 100km in three days, you may lose some perspective for the Day 4 run of 86km. There is palpable tension and apprehension in the air at camp before the Start. Physically, everybody has trained for this day but the tough part is the mental game. Sam – like most other runners – uses mantras: “Get it done, get it done!”, “Never give up!” and one other with an F-bomb. Since the long run has seven checkpoints, he compartmentalizes the stage into seven sections. That helps to a certain extent, but on the way to checkpoint 3 the temperature hits 46C and Sam is dangerously low on water. After having difficulty opening his pack at the checkpoint, Sam takes his emergency recovery shake (yeah, I think this qualifies as an emergency, Sam). After getting his core temperature down, he sets off. At sunset, all the runners put compulsory glow sticks on their packs as they navigate through the desert at night. The trail of runners thins out and nobody is around when things get tough. Down the dune into darkness. Up the dune is a struggle but only the faint glow of the Finish is visible. Get to the next checkpoint. Where am I? Where am I going? Where is everybody else? Get it done, get it done. Never give up. Over seventeen hours later, Sam is the 355th finisher for the Long Day!

Just a Marathon Left
The last stage of MdS is ‘just’ a marathon, which isn’t too tough under normal circumstances. Sam’s nutritional intake has finally caught up with him and he has what ultramarathoners euphemistically refer to as “GI distress”. Nonetheless, Sam cranks out another marathon in under six hours and he is 414th overall out of about 1,200 finishers! That is a highly impressive result and a resounding success, which justifies all that hard work over the past six months. I would feel remiss if I did not give a shout out to our fellow DTR hero, Simon Marshall, with his 30th place finish – that is simply unfathomable to me.
Congratulations! ■

Sam’s Ten Random Thoughts on MdS
1. Get used to running, recovering and sleeping in the same clothes for nine nights. You stink. Everybody stinks.
2. Your tent mates will get on your nerves (and you will get on theirs), but they will also be massive support.
3. You will lose toenails.
4. Rationing toilet paper is not fun
5. Pain is only temporary. Man up and deal with it.
6. You will have no social life for the six months of training.
7. Everybody experiences a very low moment at MdS. Bouncing back is key.
8. Getting to the Start will cost a lot more money than the spendy entry fee, once you factor in all the running shoes, gels, packs, lightweight gear that you must buy and try.
9. You will start the race only wanting to complete it. By the end, ranking is everything – even though you know nobody cares what place you finished.
10. Going from barely being able to run 10km last summer to being in the top third of finishers at MdS – that’s a combination of serious training, determination and true grit.