The 27th edition of the Abu Dhabi Desert Challenge, the region’s first World Championship level motorsport event, took place at the start of April, and there was great cause for celebration amongst the UAE and GCC competitors taking part as they outclassed their international rivals. 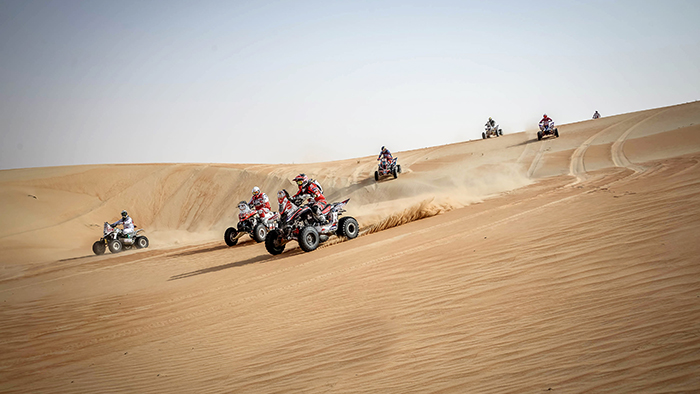 Founded in 1991, the first and second years of the rally were won by Emirati Mohammed Mattar in a Landrover Defender, but since that opening victory, French drivers have won the event an astounding fifteen times, Russia and Qatar have three victories apiece, while Spain, Japan and even snowy Finland each have a win to be proud of. However, the Abu Dhabi Racing crew of Sheikh Khalid Al Qassimi and his co-driver Khalid Al Kendi have put an end to that 25 year streak by taking victory for the UAE in 2017 in their Peugeot 3008 DKR. 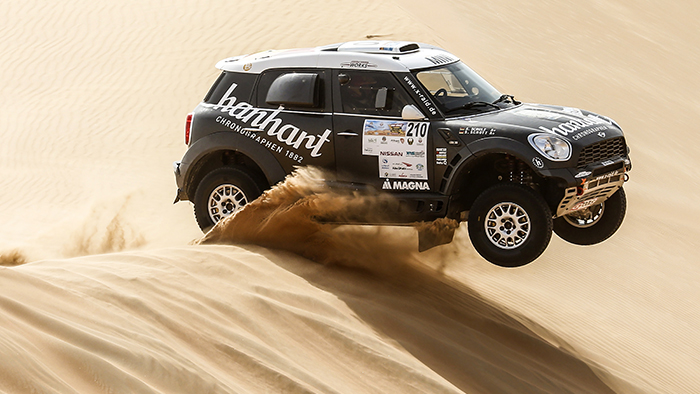 While the Emiratis put in a fast and careful performance, their victory came as a surprise as Qatari rally legend Nasser Al Attiyah held an almost 15 minute lead going into the final stage of the five day competition. However, a high speed crash with approximately 100km still to go saw the two-time Abu Dhabi Desert Challenge winner cartwheel his Toyota Hilux three times at speeds in excess of 150kph. Thankfully, both Al Attiyah and his co-driver Frenchman Mathieu Baumel were unhurt, but had to retire due to the damage sustained to the car.

Completing the podium in the car category was Czech driver Martin Prokop, a regular in the World Rally Championship (WRC), and co-driver Jan Tomanek, who finished an excellent second in the Ford F150 in their debut of the event, while Qatari Mohammed Abu Issa, a two-time winner of the event on a quad, and his co-driver Frenchman Xavier Panseri completed the podium in third place, the same result he achieved in the previous round in Dubai. 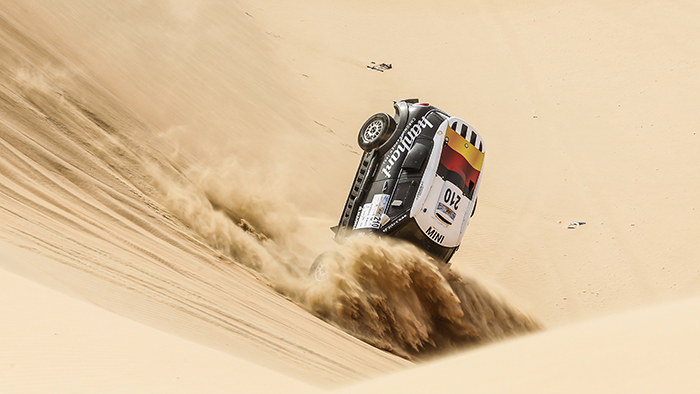 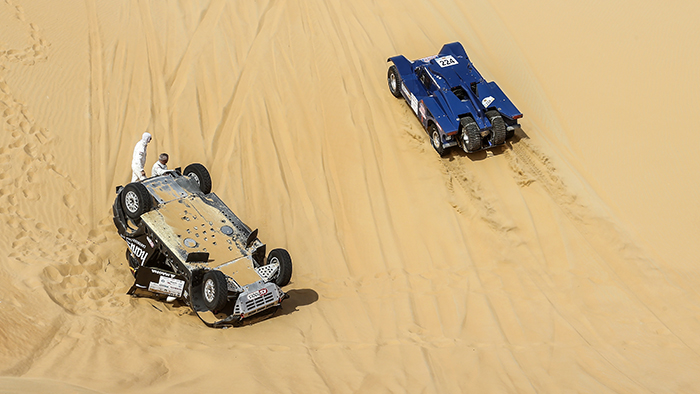 There were further victories for regional cars in the supporting classes, as Saudi driver Yasir Saidan and his French co-driver Laurent Lichtleuchter won the T2 class in a Toyota Landcruiser, while the Emirati pairing of Ahmed Al Maqoodi and Obaid Al Kitbe won the T3 class in a Polaris RZR. 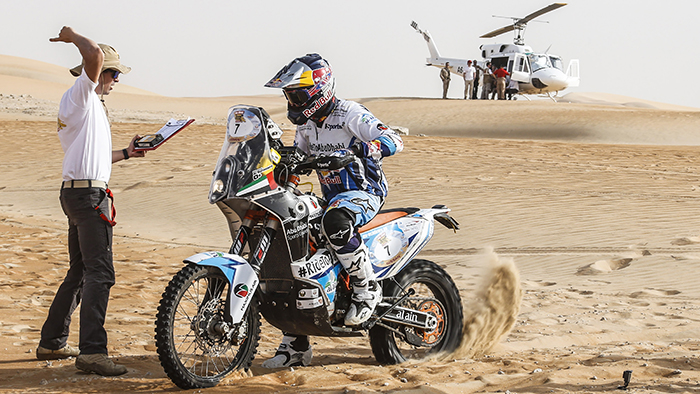 In the motorcycle event, the opening round of this year’s FIM Cross Country Rally World Championship, Dubai-based Briton Sam Sunderland proved that his victory in the Dakar Rally was no fluke by dominating his ‘home’ event for the Red Bull KTM Factory Racing Team. Sunderland, who had previously finished runner up in the event three times in recent years, became the first UAE based rider to win the rally since motorcycles were introduced in 1995. He adds his name to a list of winners including legends like Heinz Kinigadner, Stéphane Peterhansel, Cyril Despres and Marc Coma. Completing the overall podium behind Sunderland were Husqvarna rider, and last year’s FIM World Champion, Pablo Quintanilla of Chile in second, and Sunderland’s KTM teammate Matthias Walkner of Austria in third. 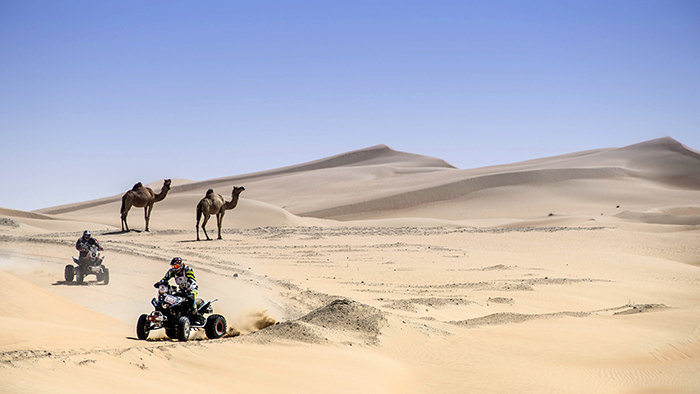 The quad race was won by rising Kuwaiti star Fahad Al Musallam, following up his maiden international victory at the Dubai International Baja in March, while David McBride, the rider with the most motorcycle appearances at the Abu Dhabi Desert Challenge was a dominant victor in the new FIM Veteran’s Trophy, with the Dubai based Ulsterman riding for the local Vendetta Racing Team. 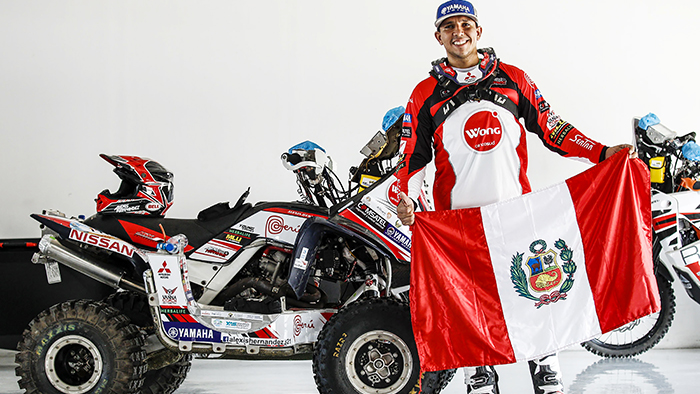 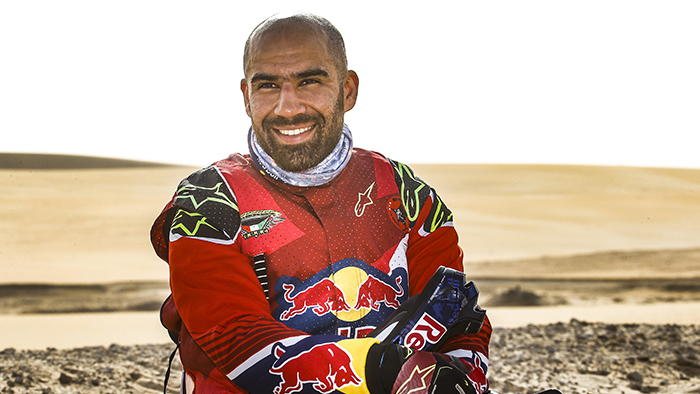 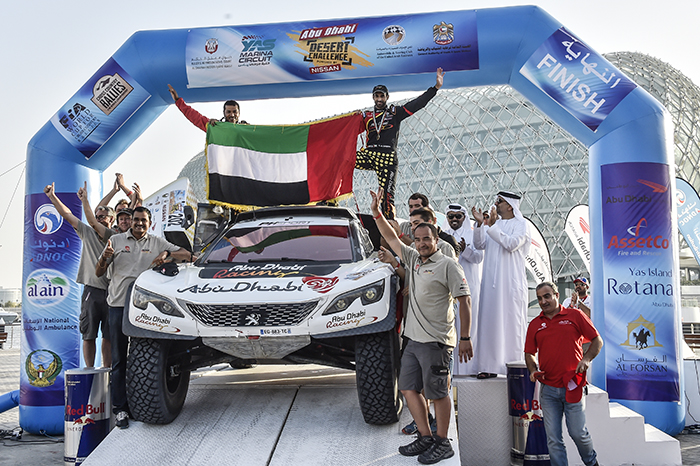 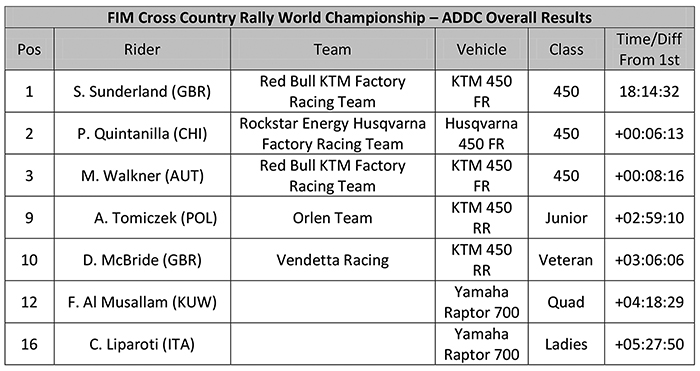