Jebel Hafeet – A Hike Into Another World

In the forgotten interior of the United Arab Emirates, at the edge of the Empty Quarter, lies the desert oasis of Al Ain. There, at the foot of Jebel Hafeet, a giant monolith of rock shooting up from a desolate plain, I’m alone at an unmarked trailhead about to do something very foolish.

With little more than a print out from the Internet and a decent sense of direction but no GPS, compass or topographical map, I’ve reckoned the 4-hour hike from Green Mubazara up to the 1,249 metre (4,098ft.) summit should be cinch, a fun little day hike, albeit without any cell phone service. 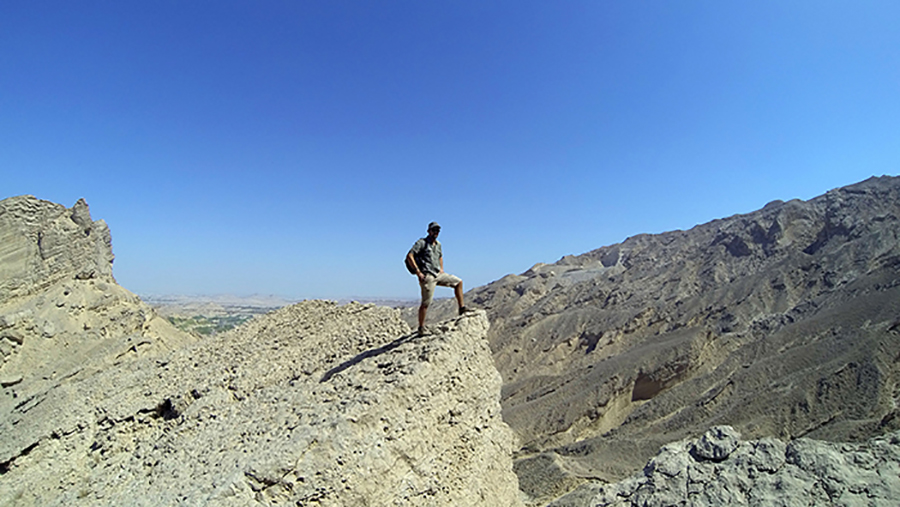 Up here in the deserted foothills at the jumping off point, I can’t help but recall my American pal who set off to explore Jebel Hafeet with one of his students and got medically evacuated by an emergency helicopter after his pupil twisted his ankle and couldn’t climb back down. The recent deaths of other hikers in the vicinity such as the Emirates Airlines pilot who fell to his death on Jebel Jai’s Stairway to Heaven or the UAE resident who succumbed to heat and dehydration at nearby Wadi Al Sameenah also come to mind. The gravity of the situation and the heat of the afternoon sun bead my brow with sweat. My mouth goes dry.

I realize now that recently watching 127 Hours, the true story of Aron Ralston’s solo foray into the wild slot canyons of southeastern Utah, could either be my undoing or my salvation from a similar fate, but without even a Swiss Army Knife, I’m hoping it won’t end up with me cutting (i.e., chewing) my own arm off to make it back to civilization. 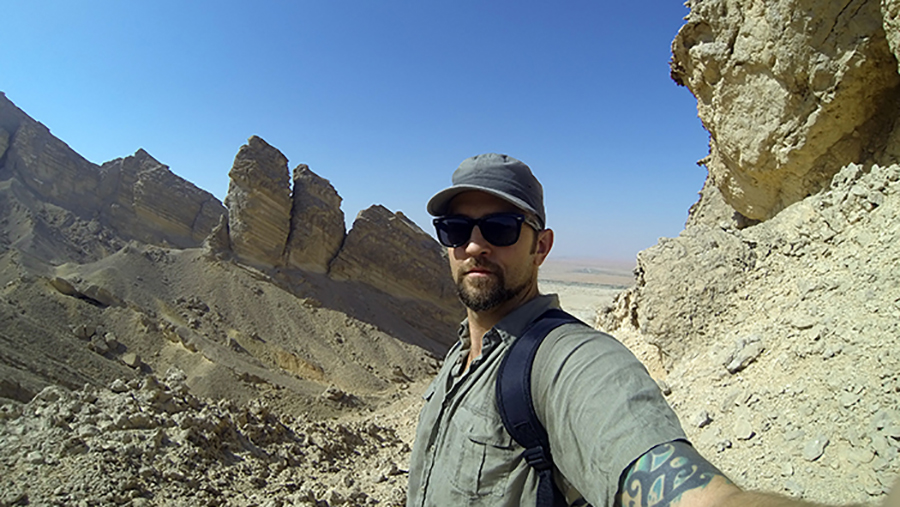 If this hike does prove to be my demise, at least I know I’ll be in good company should I tumble off the southern side of the mountain where there are 317 honeycombed tombs dating back to 3,200 to 2,700 BC. Inside the 5,000-year-old catacombs, skeletons (all would be hikers such as myself, I presume) were laid neatly to rest for eternity with Bronze Age copper artifacts, pearls, and ceramics from Mesopotamia.

From inside the safety of the Green Mubazzara, a family-friendly park of green grass, date palm trees and hot springs, the cloying smell of civilization – of frying flesh and French Fries – drifts all the way to the trailhead where I’m still contemplating my fate, staring into the parched mouth (a dry canyon bed) of what legendary desert explorer Wilred Theisger described as a giant beached whale of a mountain.

Giant enough to be clearly visible from space, Jebel Hafeet was actually, in the Cenozoic Period, a beach on the ancient Sea of Tethys. Some 65 million years ago, when palm trees grew as far north as Greenland, a volcanic eruption of oceanic crust and upper mantle transformed this oceanfront property into what Dr. Shaikha Salem Al Daheri, Executive Director of Terrestrial and Marine Biodiversity at the Environmental Agency Abu Dhabi (EAD), has called the most ecologically diverse and biologically rich area in the whole Arabia Peninsula.

The thought that this treasure trove of flora and fauna, of geology and archeology, has been in my backyard for so long (I’m a 4th year expat in Al Ain) and I have yet to explore it, gets my white guilt in gear and moving up through the boulder field of the wadi – self-reproach and curiosity trumping common sense. 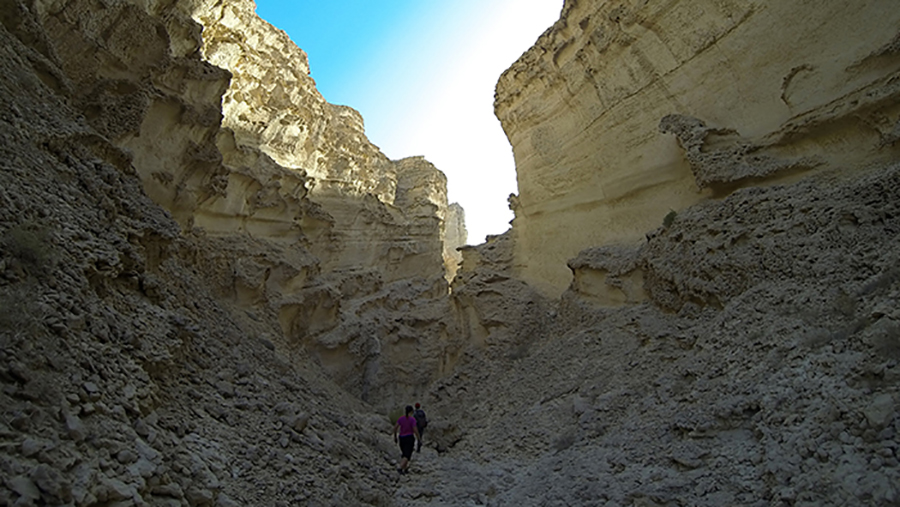 On a canyon bed of solidified lava and magma from when the prehistoric beach suffered its great upheaval that transformed it into a mountain, I tramp past shallow pools and croaking toads that go quietly with my approaching footsteps, hiding in between maidenhair ferns.

In addition to thorny acacias, the wadi is shot through with serpentine, a dark green mineral of hydrated magnesium silicate, mottled and spotted like a snake’s skin. Ancient corals, plankton and crabs seared into sedimentary rock bear silent witness to the geological violence that ushered in the rise of Jebel Hafeet and the age of mammals on the Arabian Peninsula. Of special note are nummulites, a disc-shaped fossil unique to Jebel Hafeet.

In the dappled shade of an acacia, I pause to catch my breath, wondering what a mammal of my sorts, supposedly the pinnacle of the evolutionary chain, is doing out here alone, in the heat of the day. Snatching the list of fauna from my back pocket, already stained with sweat, I fan myself with it. Glancing at it from the bottom to the top of the food chain, I make a mental note of what to look out for, what not to step on and what could kill me (most fit in all 3 categories). 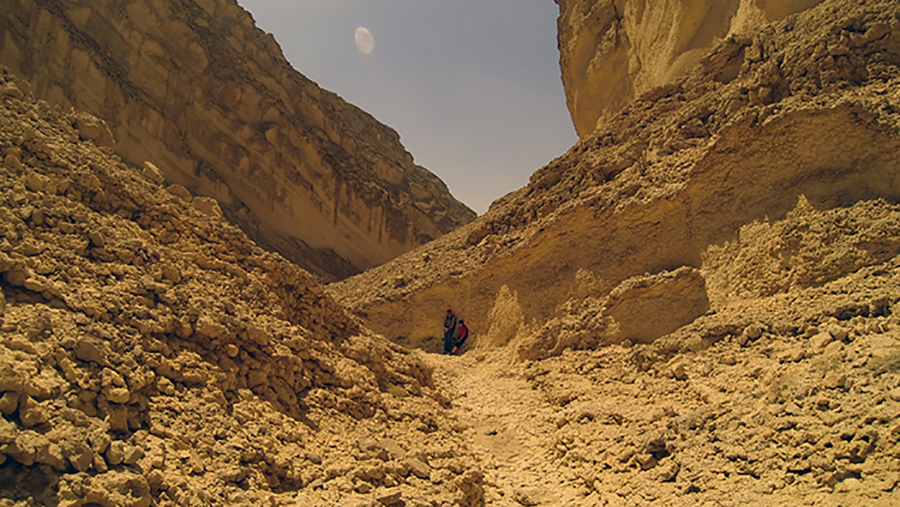 The first category includes 315 different species of invertebrates (creepy crawlies to you and me) and among them – scorpions, camel spiders, centipedes and a couple of unique endemics such as the sand cockroach and minute moss beetle. Counterbalancing the creepy-crawly factor are 23 different kinds of beautiful butterflies of which I have seen a few flittering by.

Just the thought of sand cockroaches, scorpions and centipedes send a shiver down my spine that gets me on my feet again. Dusting the wadi from my rear and double-checking to make sure no stowaways have hitched a ride down there, I step gingerly through the boulder field of this zone of elevation known as Acacia Tortilis Parkland that soon gives way to the loose scree and dwarf shrubbery characteristic of the higher altitudes of the Wadi Montane zone.

At higher altitudes still are the feathered creatures of Jebel Hafeet (avian dinosaurs in scientific terms) circling high overhead. Gazing upwards into a cloudless, flightless sky, it’s hard to imagine there are 119 species of birds here – notables being Kestrel’s and Bonelli’s Eagles, Arabian Babblers, Barbary Falcons and Egyptian Vultures. Actually, Jebel Hafeet is the only place in the UAE where you might be lucky enough to spot an Egyptian vulture of the flying variety. 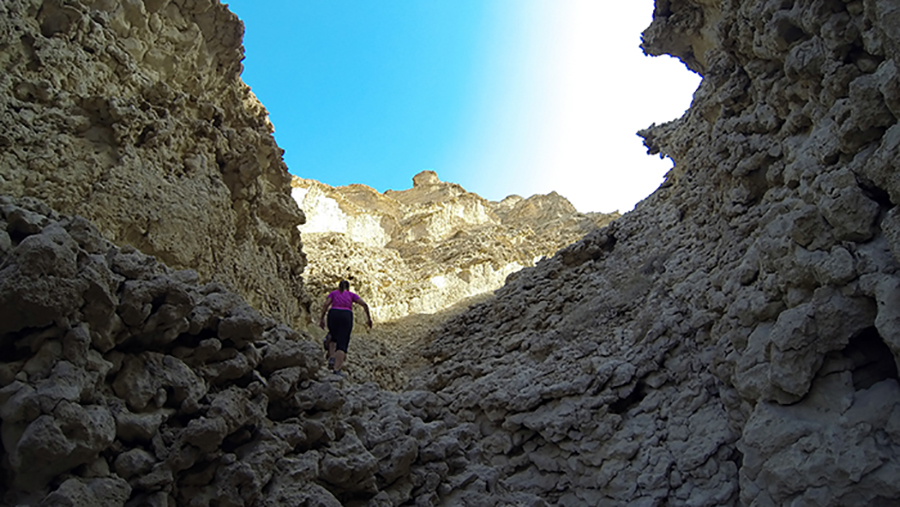 The variety of slithering and side-winding creatures among the folded and stratified rock of Jebel Hafeet is slightly unnerving. The Persian Horned Viper with its ‘horns’ above its eyes (really just scales growing on top of one another) and its vertical pupils fits the description – looking unnervingly as dangerous as it actually is. Highly venomous, it moves in a sinister side-winding motion but like most desert creatures, it has more sense than I do and only ventures out around sunset (which is quickly approaching). Picturing it, I quicken my pace and inadvertently slip on some sharp scree, drawing blood from my knee on the ancient stones. Hoping Persian Horned Vipers aren’t drawn to blood the way other predators are, I wind my way back onto what looks like the trail.

One of the features of Jebel Hafeet that has actually drawn me here are these selfsame otherworldly creatures like the Persian Horned Viper. Other seemingly alien life forms such as the Sinai Rock Agama (a lizard that turns bright blue during mating season), fan-footed geckos, spiny-tailed lizards (called ‘dhub’ in the Emirati dialect) and even one hermit type lizard (Acanthododoctylus Ophedodurust) that was considered extinct until 1982, all remind me of characters from the canteen scene from Star Wars, Episode IV. Just imagine all of these diminutive desert dwellers the size of human beings having a few pints together at the local watering hole, throw in some similarly super-sized mammals found around Jebel Hafeet such as the globally threatened Blandford’s Fox, Brandt’s Hedgehog, bats, hyraxes and the Arabian Tahr and you’ve got yourself an interspecies (if not intergalactic) party lively enough for a George Lucas magnum opus.

While that might sound like an absurd thought, I’m actually not the first one to notice Jebel Hafeet’s sci-fi potential specifically and its cinematic charisma in general. Long time Al Ain resident Mike Goldschmidt, a hardcore fanboy of the franchise, actually wrote, directed and produced his own Star Wars fan/tribute film here, Episode III 1/2 in which he used Jebel Hafeet as Tatooine, Luke Skywalker’s desert home planet. Bollywood also got in on the act – the climax for Race! was filmed on the Jebel Hafeet’s twisting highway to the top. 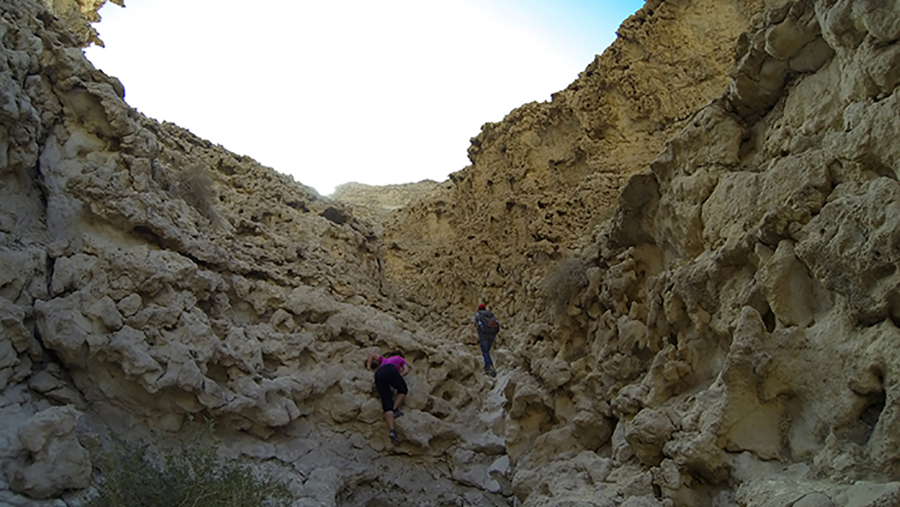 Nearing the top, I stumble upon a rare local endemic, the qafas shrub, its yellow bloom and reddish hairs making it unmistakable. It reminds me that not only is the fauna of Jebel Hafeet seemingly from another planet, so is its flora. Jebel Hafeet hosts some of the most rare plants on the Arabian Peninsula, accounting for 40% of all the plant species in the Emirate of Abu Dhabi. Of special interest is this gafas shrub (known scientifically as Acridocarpus Orientalis) because of its potential to treat cancer. For centuries, Bedouins have used the plant as pain relief medicine, crushing the seeds into a powder and making an oil to massage into the affected area, particularly useful for udder inflammation in livestock. Sadly, the plant is endangered (like the Dwarf Palm, another endemic and only palm native to the UAE) and might be wiped out before it’s potential for science is fully explored.

As the sun begins to set, a fireball of orange and red, the summit of Jebel Hafeet appears in reach. But before I make my final ascent I pause, taking in the scene – feeling very much like a young Skywalker on the brink of new mysteries. Far below, the alluvial plain gives way to chalky, calcareous dunes and further still, beyond the horizon, sabkha flats that recede to the shores of the Arabian Gulf. A light breeze from the north, a shamalia, ruffles through my hair. If only there was a second setting sun and a John Williams score rising and lilting in the background, my Star Wars moment would be complete.

While I made it to the summit without having to dismember any of my extremities, ilhumdelelah, next time, I’ll bring someone else along to share in the otherworldly delights of Jebel Hafeet that have been right there in my backyard all along (and a GPS too). ■