Here’s some really bad news to some guys and gals out there – if you’re currently dating an angler, you need to know one thing, one very big thing – We…have trust issues!

From sharing spots, lures, bait, rods, reels, where to buy, the best prices, and online shops – we don’t trust anyone with something to us which is precious information that gives us a “slight edge”. Those are in quotes because in reality, that’s just a figment of our imagination! 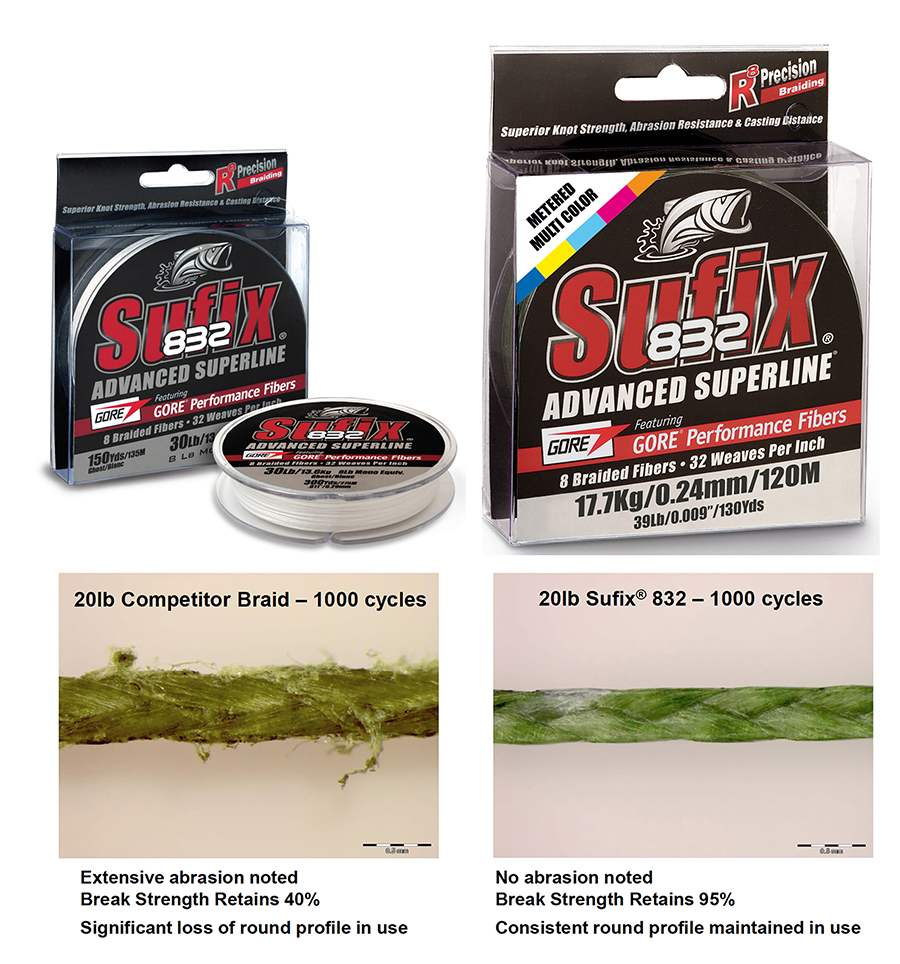 Everyone has access to so much information on the Internet yet, not a lot of people know how to look for the right information, adding fuel to the trust issues we already have.

One of the biggest things anglers often have trust issues with is the line. I have my favourites, others have their own, from brands to certain types up to the most miniscule reasons yet a lot of people don’t really go through the motion of looking for the right line that works for them – 90% of the people that fish these days only follow what they see on YouTube and if you really ask them in detail what qualities they like about the line they’re using; I guarantee you two things will happen: they will talk like the salesman that sold them the line (and most of them don’t really know what they’re talking about) and before you know it, the guy who asked the question will be the one who doesn’t know anything! A very small percentage will talk about how the line performs and what they like about it with their experience, what they don’t like about it…but that’s rare. Again, we have trust issues!

Breaking the line
So why is there a lot of buzz around fishing line? It’s just a piece of string right? For some people, the answer to that, is like asking them, “how long is a piece of string?” I don’t need to tell you the fishing line is what connects you to the fish, we all know that, what a lot of people don’t realize is that fishing lines now have been getting more and more complicated as fishing styles evolve and new fishing methods are getting introduced or the new “secret” style of fishing – the fads catch traction opening up a new dimension to the already confusing world of fishing.

So here I would like to help people understand exactly what you’re getting with some popular lines used today. Since most of the confusion is with braid also since it’s practically more expensive, people hesitate in their purchase of braid than with mono, I’m also not going to talk about fused line because it’s not really braided line. 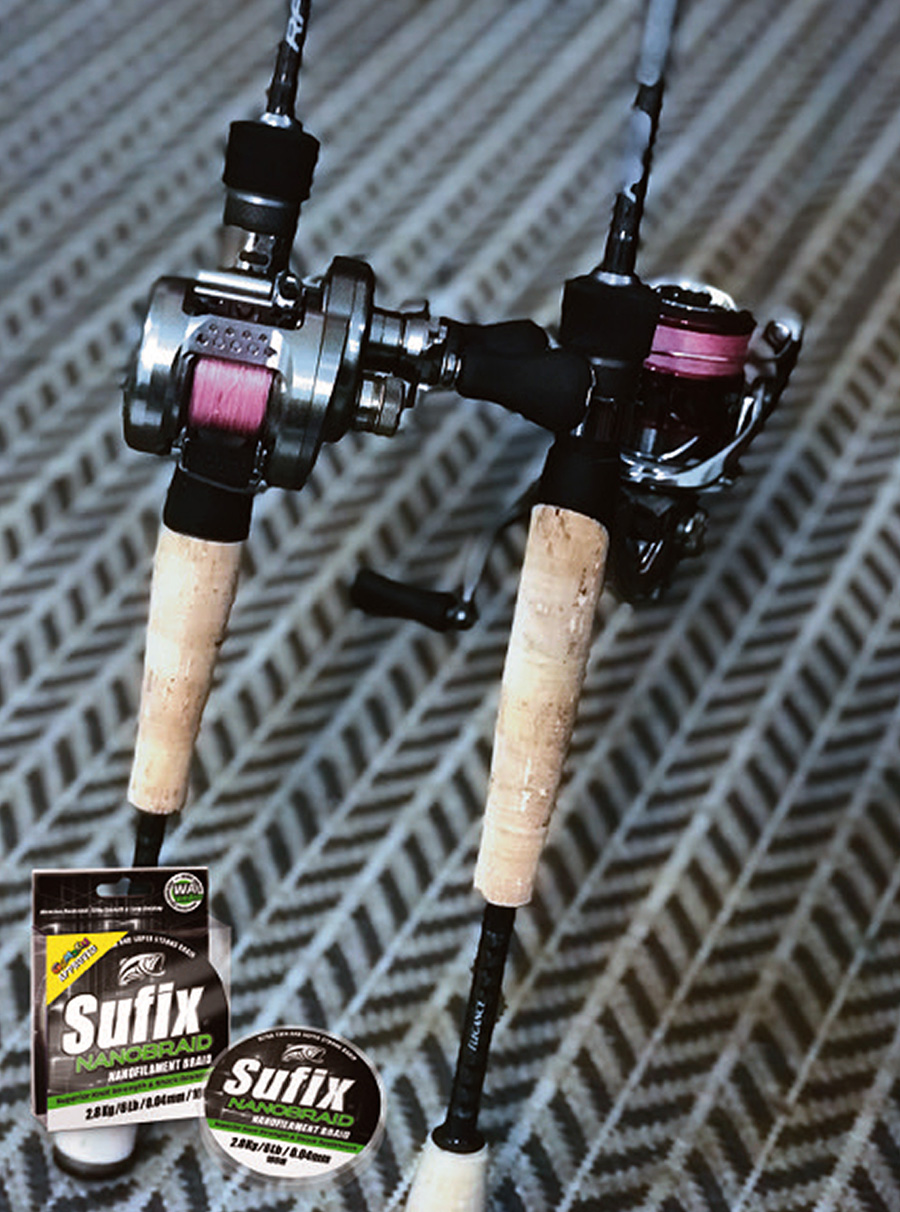 For fishing deep water with very light jigs at 2.5g to 3.5g my reels are spooled with Sufix Nano Braid their thinnest line – the strands are thinner than the grands of your fingers

The Birds and the Braids
I’ll mention brands I’m familiar with but that doesn’t mean you have to stick with the brands mentioned simply use this as a guide the next time you walk into the shop and choose your line according to your budget and preference. The differences in construction, the technology in braiding, number of carriers as well as the coatings each brand gives each of their braids affects the pricing greatly, so don’t think of this as a side by side comparison, but rather something that you can use as a guideline.

The number of strands that make up the braid is called a “carrier”. The lesser the number of carriers, the thicker the strands, this also means the lesser the carrier strands the rougher the line would be, without its coating. The coating the company decides to put in stiffens the braid and makes the slick surface. If you compare two lines, one with 4 carriers and one with 8, at a given diameter (say 0.1mm) the 4 carrier braid will have 4 bigger strands braided together while the 8 carrier braid will have 8 smaller strands to make up the same diameter. The 4-carrier braid will be stiffer than the 8-carrier braid. You can see the same principle at work with cables and ropes – the more strands the cable or rope has, the softer it will be.

There are two predominant styles for braid – US style, and Japanese style. US style braids are built exactly how they build their cars, over-engineered, which automatically means big and bulky, so when you see lines from the US, they will, more often than not, over test by a huge margin. This means if your line says 30lb (15kg roughly), it would probably break at around 50lb or more (25kg and up), in the past, tests on Spiderwire 20lb (roughly 10kg) braid shocked a lot of people when most samples broke at 50lbs (roughly 25kg) or better. While it was a line that was labelled “20lb” (10kg) the truth of the matter is that it was actually quite thick as well, so comparing it to other brands labelled with the same breaking strain wasn’t particularly fair to start with. 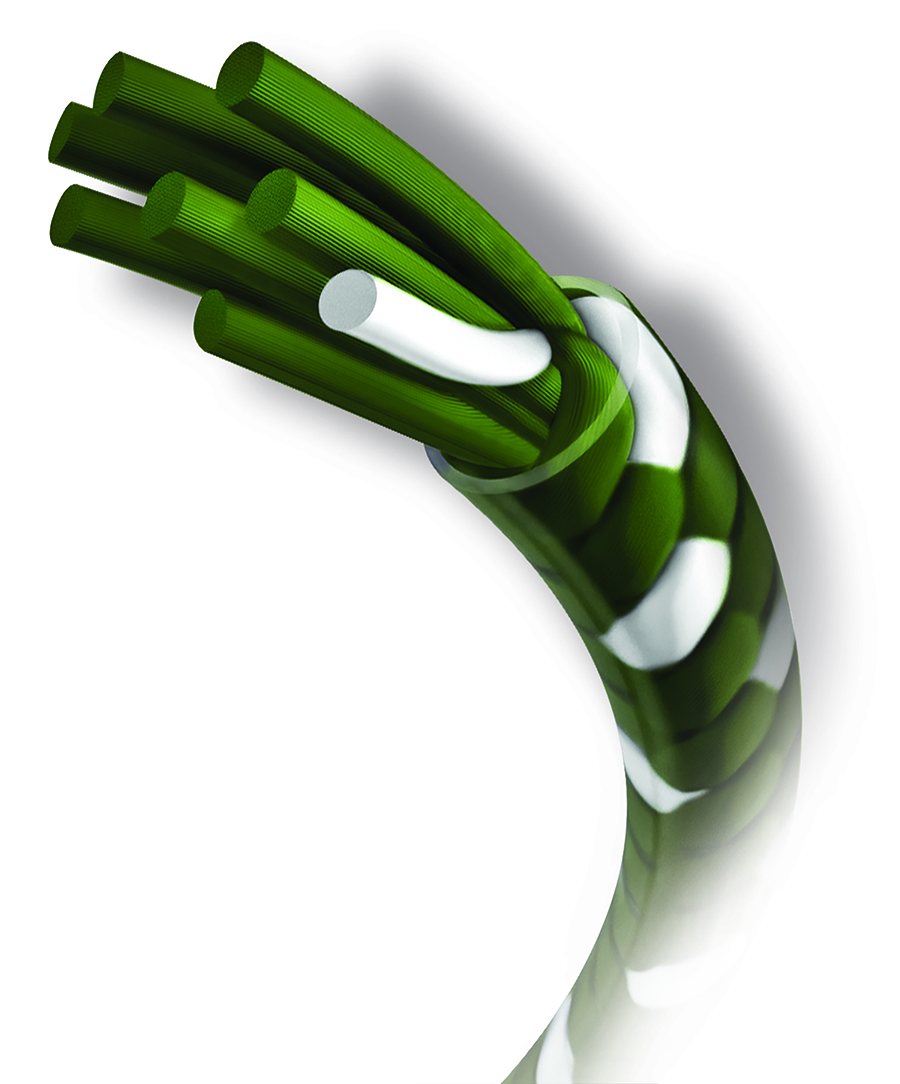 While MOST Japanese style braids are made in actual diameters and are constructed to break closer to their rating than their US counterparts. They are also, more often than not, softer than their US versions.

Here’s an example: The Sufix Matrix pro has the same number of carriers as the original Power Pro – the construction of both lines is pretty close, they both have 4 carriers and pitch per inch (number of braiding it goes though) is also quite similar. Both are US style braids.

Different markets require different diameters even with the same “type” of line. This is why you see a lot of variations even in the same brand and why brands create a different type to cater to specific markets.

The Japanese lines are largely popular for more technical anglers because of the type of fishing the Japanese do and the methods being adapted to different parts of the world.

The Sufix Performance braid and Berkley Whiplash departed from the usual 4-carrier strand and made it 6 carriers. This made the line a little bit softer and made the resulting braid stronger. These manufacturers are the only ones left creating 6 carrier braids until today. These braids are popular in countries that were heavily influenced by US style fishing and in areas where the fish are big and need some “convincing” to get them out of the sticks and stones!

In more recent years, braids having 8 carriers or more have been getting a lot of popularity, big brands have their versions as well as some boutique brands, choosing which one to use is always a guessing game for most. The easiest solution I have found is to find friends that use the lines you want to try. Ask them their feedback and see if you can use the combo for a day or two and see if it suits your style. For a lot of people (such as myself that have a lot of reels) it’s a matter of budget – so it’s really not easy to just go and buy a ton of line only to find out later on that what you bought doesn’t really fit your style of fishing. I wouldn’t just base your decision on comments found in forums and videos. Braid isn’t cheap and remember it’s your connection to the fish!

Braids on My Reels
Of all the 8 carrier braids, there is one that has been quite popular since its introduction 7 years ago, and for a line to stay that relevant, it has to have a quality that isn’t found in others -this is the case for the Sufix 832. Departing from the usual 8 carriers of full spectra or dyneema, Sufix 832 has one strand of Gore Fiber. If you aren’t familiar with Gore technology, you might be surprised to know they are one of NASA’s biggest suppliers. Gore can also be found in a lot of products around us today, in the clothing business, they are the people behind GORE-TEX, which we can find in top end outdoor clothing and shoes.

The marriage between 7 carriers of dyneema and one Gore fiber resulted in a line that is undoubtedly one of the biggest things to hit fishing in recent years and is still the only braid to do exactly what it’s supposed to do. Sufix 832 is a unique product that has remained relevant and practically one of the lines that sells the most in the world. It has some characteristics that make it stand on its own – 832 starts out stiff and becomes very soft the more you use it, it’s thin and powerful and very abrasion resistant because the gore fiber takes all the abuse leaving the dyneema fibres unscathed, so it basically retains all its strength longer. Even when getting abuse from nicks and scratches that would have otherwise cut your line. The advantage list goes on and on about Sufix 832 and quite honestly, I think you need to use it to be able to see how different it is with other lines.

Since their introduction of super thin lines (.06mm and .08mm) in 2013, I have been using them more and more on light and ultralight applications. Neon lime, Hi Vis Yellow and Ghost are my personal favourites and the metered/multi-coloured Sufix 832 are all I use for jigging. 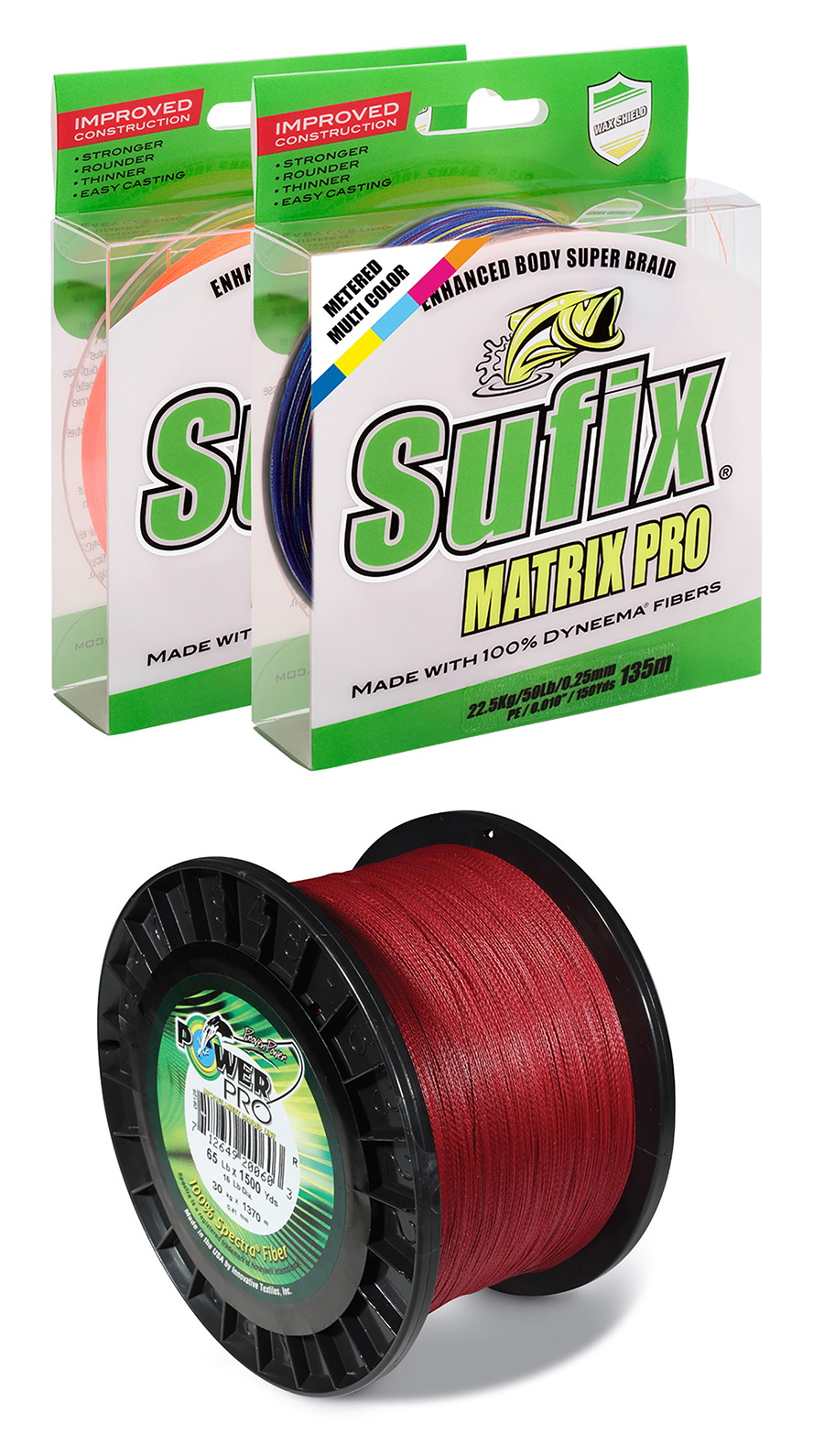 Pretty much the same construction, quite a big difference in pricing – and what a lot of people don’t know

The Sufix Performance Pro 8 is constructed the same way Japanese lines are made, basically similar construction to YGK, Varivas, Momoi and Sunline. It has 8 carriers making it very strong, thin and soft. Most of my casting reels are spooled with Pro8 because I get extra pulling power with it especially when casting from a boat in deep water where I need to stop fish from diving down. Pro8 does not have a metered version –Pro8 has pink and green. I like the pink – it’s very useful when casting and I could clearly see where my line is. Although the Pro8 has thinner diameters, I haven’t really tested them out long enough to see if they fit my needs. All my casting reels including ones I’ve prepared for big tuna and GT are all spooled with Pro8.

I use Sufix Nano Braid for ultralight applications in deep water (will write about this soon) I have been finding very good success with this line. It’s probably the thinnest line that Sufix has and is quite strong because of the way it’s made – It’s braided more densely than other braids (higher pitch count per inch), roughly twice the number on normal braids – this makes it softer and stronger than other braids. When fishing thin lines in areas with structure, I use Sufix 832 just because of the extra protection that the gore fibres give me. 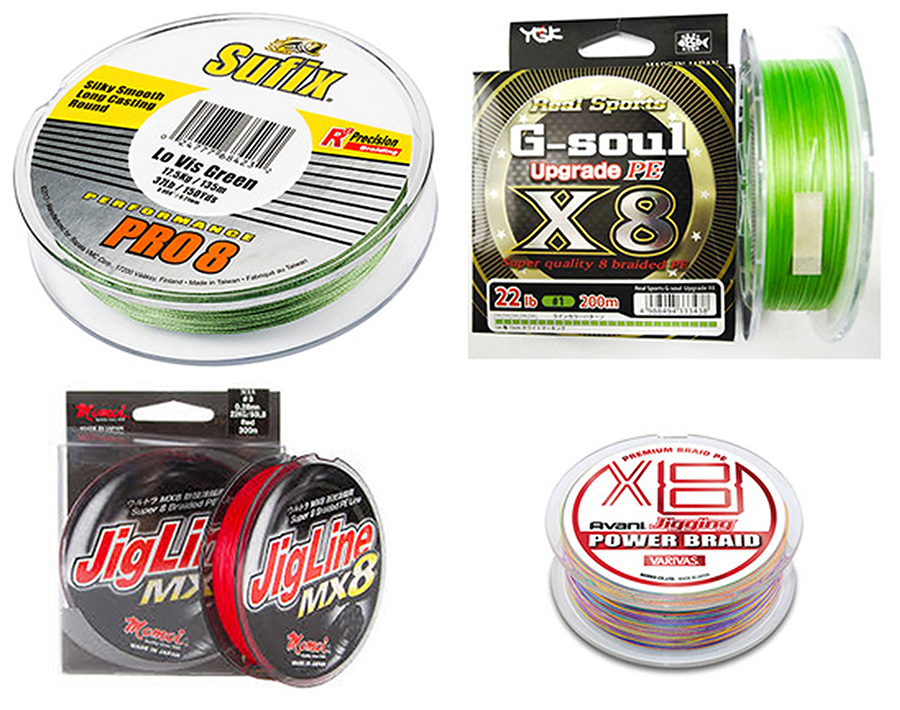 Braids of the same feather – all of these are constructed the same way with very little diffence, the biggest difference would be in the coatings each company applies to their braid

Choose your Braid
Choosing the braid that goes on your reels is often a big struggle when you start to get a bit technical with your fishing, you find some limitations with what you’re using and with information on this, although readily available online, more often than not, people don’t really know where to start.

Hopefully, I was able to shed some light and give good examples you could use to have a starting point to find which ones fit your needs. Remember that like your rods and reels, your choice of braid is a matter of preference and no matter what your favourite tackle shop salesman says, there is not one out there that is perfect for everything – truth of the matter is, your tackle salesman might not have experience with most of the lines out there, other than what he sells. ■