How far can you run in the Desert When it’s 50C?

Testing the Limits … Safely:
Max Calderan, the organizer of last fall’s “Tropic of Cancer Ultramarathon”, and Servee Palmans of “Hopatec Sports” put forth a challenge to the UAE Ultra-running community: “How far can you run safely in the UAE desert heat in July?” Together they hosted“100km over 50C”, a running event at the Al Qudra bicycle track. 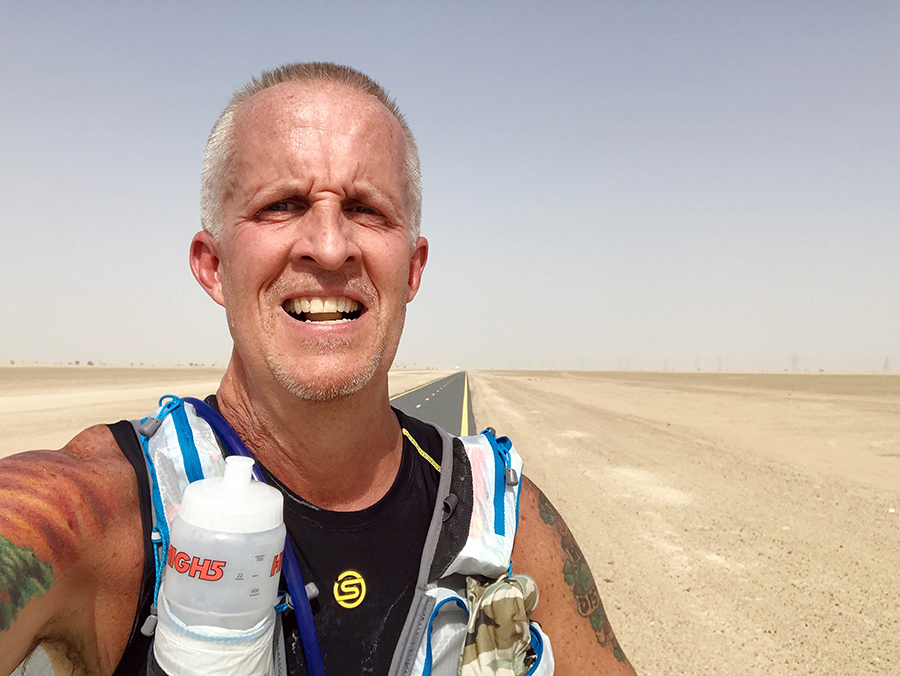 Preparation:
Most midsummer running events in extreme conditions are announced months in advance, so runners can do event-specific training and preparation. Part of the beauty of this event is that it was announced only two weeks prior, so you couldn’t prepare for it – the aim was for you run it in your “as is” fitness condition. For reasons unbeknownst to me, there isn’t a tremendous audience for running an Ultra in the desert in the middle of summer on such short notice! More than half of the people who signed up canceled at the last minute, because they probably thought they were signing up for a cycling event at Al Qudra, not an Ultra-running event.

Nonetheless the select group in addition to Max (who was race marshall) and Servee included: Mahan (a guy whom I’ve seen at Urban Ultra events), Omaima (a lady who trains with Lee Harris) and me. Pam and Mary were driving the support vehicle with water. We agreed to meet at Al Qudra at 03:45 for the 04:00 Start. 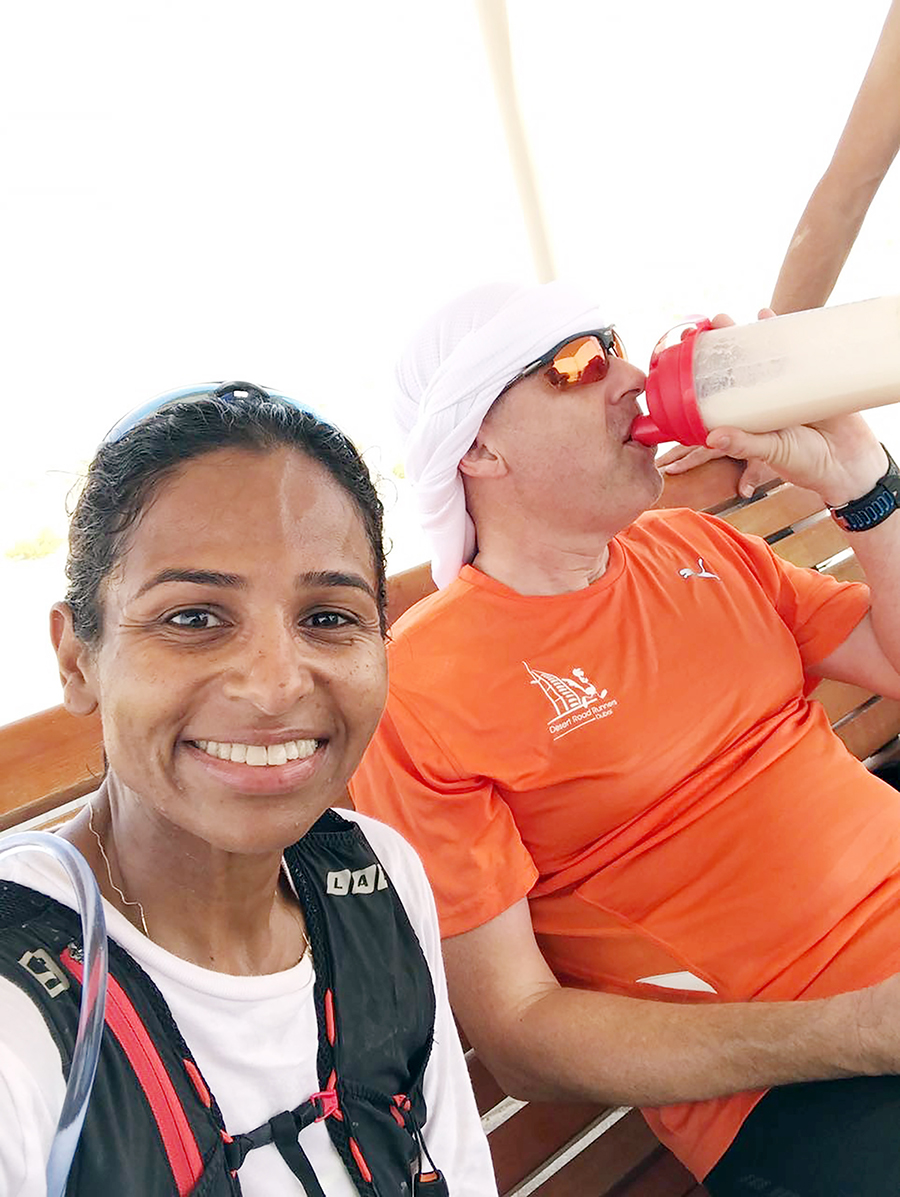 Start:
The five of us started running in the darkness without much fanfare promptly at 04:00. We ran alongside the cycling track, with little need for head lamps as there wasn’t much really to see anyway! The first cyclists appeared about an hour later, with their distinctive cricket-like clicking on their spokes. We ran at a leisurely pace as a group, just to get a feel for the day ahead. When we started the temperature was a mild 36C with 50% humidity! 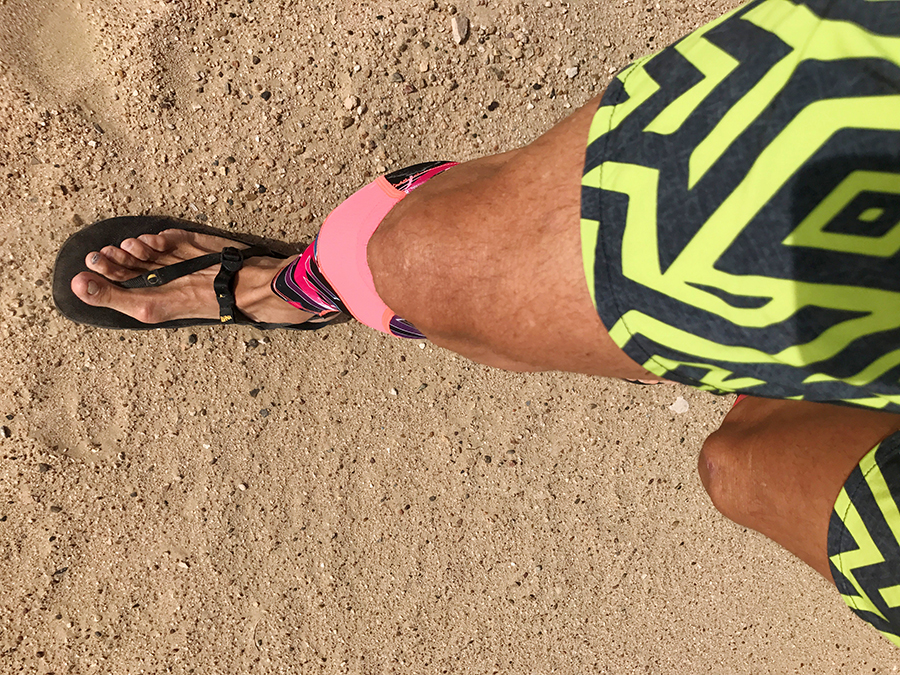 Running in the Desert:
We alternated between running on the cycling track and in the sand. The first 17km were smooth and straight with the big thrill watching the sunrise. We gradually felt the heat building up in the air. After the first turn, the route gets a little hilly which adds a change of scenery but not much difficulty. This is where the first hordes of cyclists come whizzing by, somewhat puzzled as to why our running group is out in the middle of nowhere without cycles. At 20km, the support team was waiting for us with cold water, which was a welcome break. When we made the second turn at 22km, we are facing the sun and things really begin to heat up. 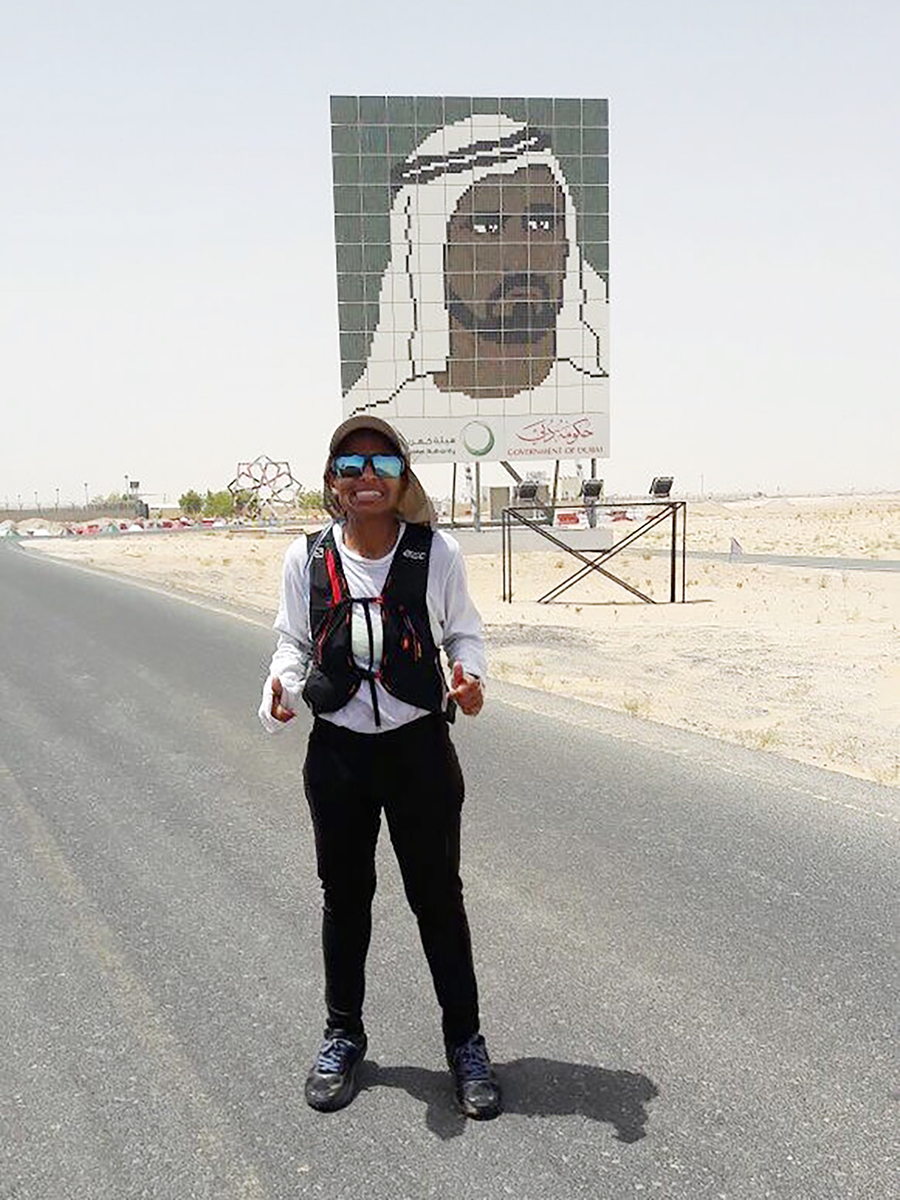 Sunny Sandy Sauna:
When I refilled my camel back at 20km, I felt how cold the cold water was through my pack. The sand began to heat up and be uncomfortable on my feet (I run in Luna Sandals). For nutrition, I had to revert to gels because real food doesn’t keep well in these conditions. After meeting the happy support team at 25km, things were seriously hot and the other runners stopped for an early ‘lunch’. I continued running, trying to get some distance in before the nasty heat sets in but soon the first three sips of water through the exposed camel back hose were hot water, like tea. Disgusting! My water bottle was too hot so I could only use that water to pour on my head. Running straight into the sun plays optical illusions with mirages on the road straight ahead. After 08:00 all the cyclists had disappeared and were probably back in their cars on the way home, so the place was deserted except for me, Mahan, Omaima, Servee and the sand. I felt like I was experiencing;“The Loneliness of the Ultramarathon in a Sunny Sandy Sauna.” 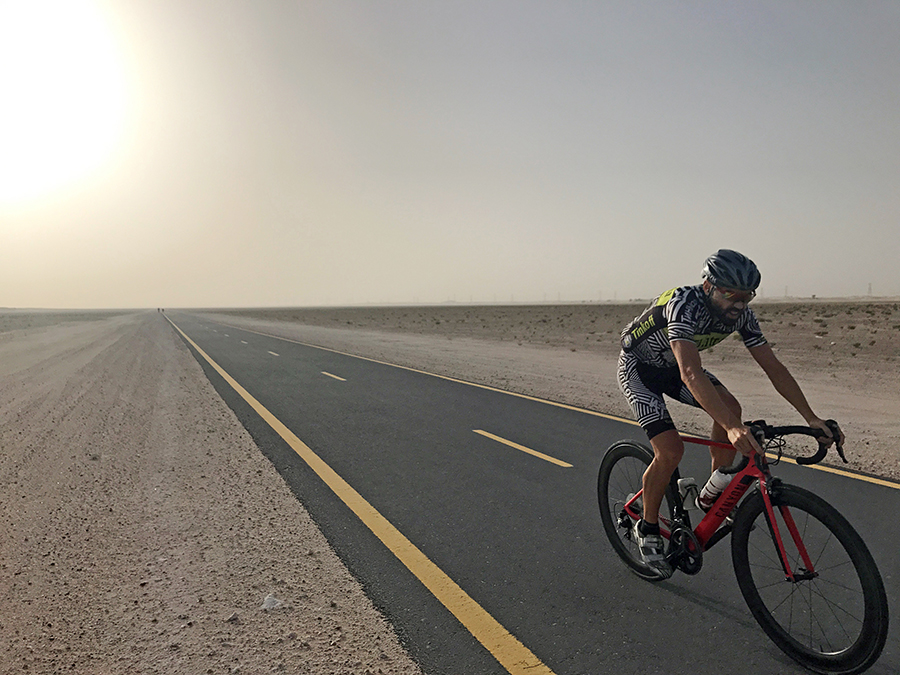 The Oryx:
You know when you are cycling at Al Qudra and see the Oryx running around? I think they’re almost as cool as camels (camels let runners take selfies, Oryx are too skittery). However, when you are running without the safety of a getaway cycle, Oryx are scary and you notice how huge their horns are! 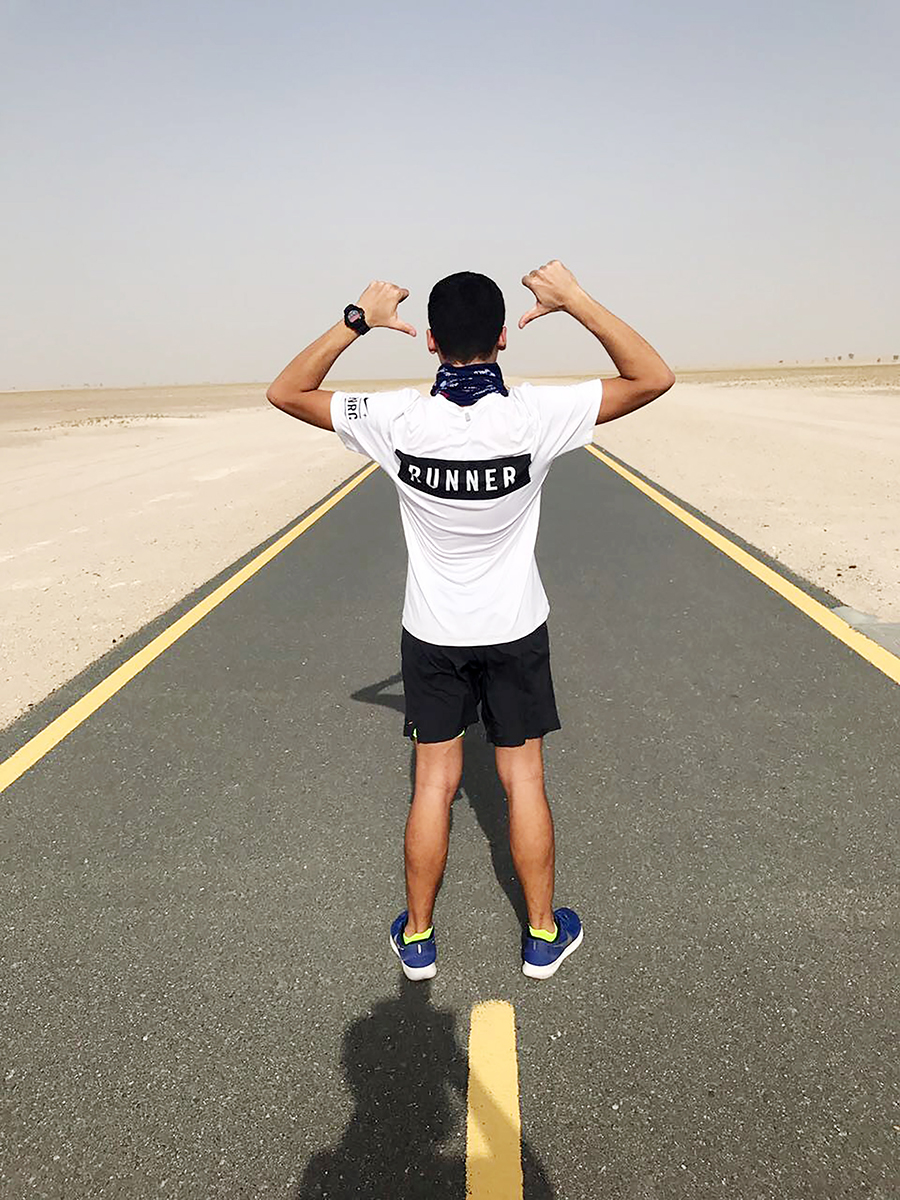 Running is Easy Until it gets Really Hard!
At 35km, it was hot. Really hot. Since there weren’t any cyclists, I ran on the track, because the sand was burning my feet (we measured the temperature of the sand at 65C). The track feels hotter than the sand and sends burning heat up my legs, but I prefer that heat to the sand blistering my feet. My pace slowed down with the sun starting to cook my shoulders. The awesome support team who also endured these conditions came by and gave me water,I used the water to pour on my head as much as I drank it. I was struggling to run, but kept pushing on. The temperature was 51C and at this point, it was just me, the sun, and the sand. 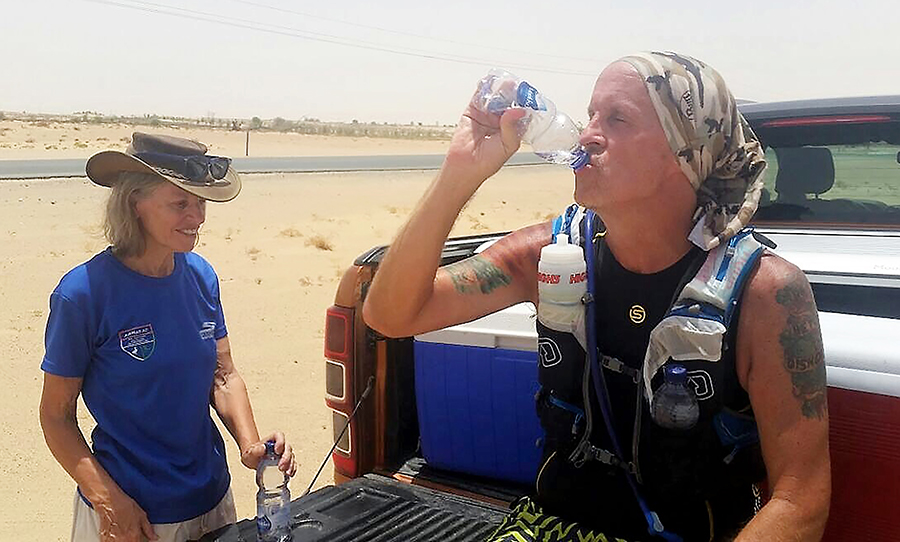 How Far Can I Run in the Desert When It’s 50C?
I saw the Start point in the distance as a delirious oasis. The support crew stopped by to check on me and offer water. When I walked over, things got a little woozy. I tried to sit on the back bumper of the truck and burned myself – ouch! I was trying to hide how much my head was spinning, but when I started to dry heave, I realized things weren’t going so well. Pam, head of the support team, told me that Max was coming over to check on me. My buddy, Albert – of Tropic of Cancer Ultramarathon fame – was there and caught me as I nearly fell over. I tried to go back to running on the track but then Max looked at me in the eye and told me to stop. As much as I didn’t want to admit it, I knew he was right. Continuing would have been a bad idea. I found my limit on running that day. I can run 46km in the heat and no more! 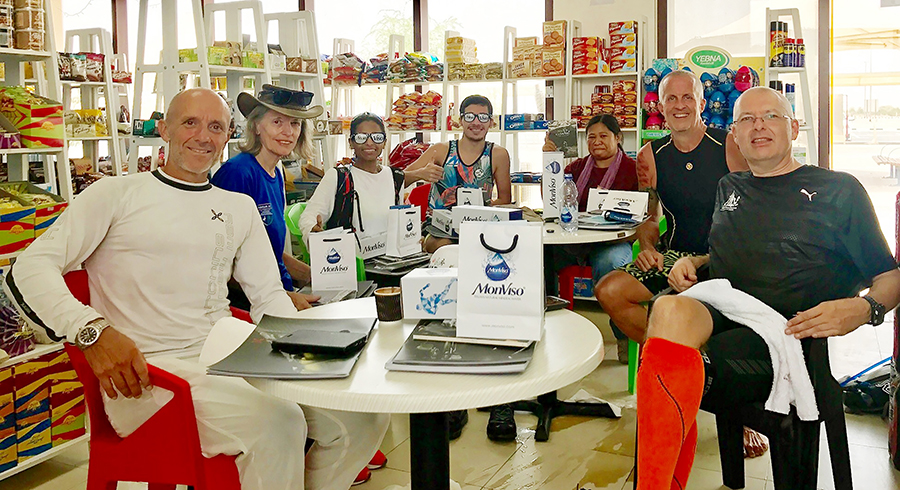 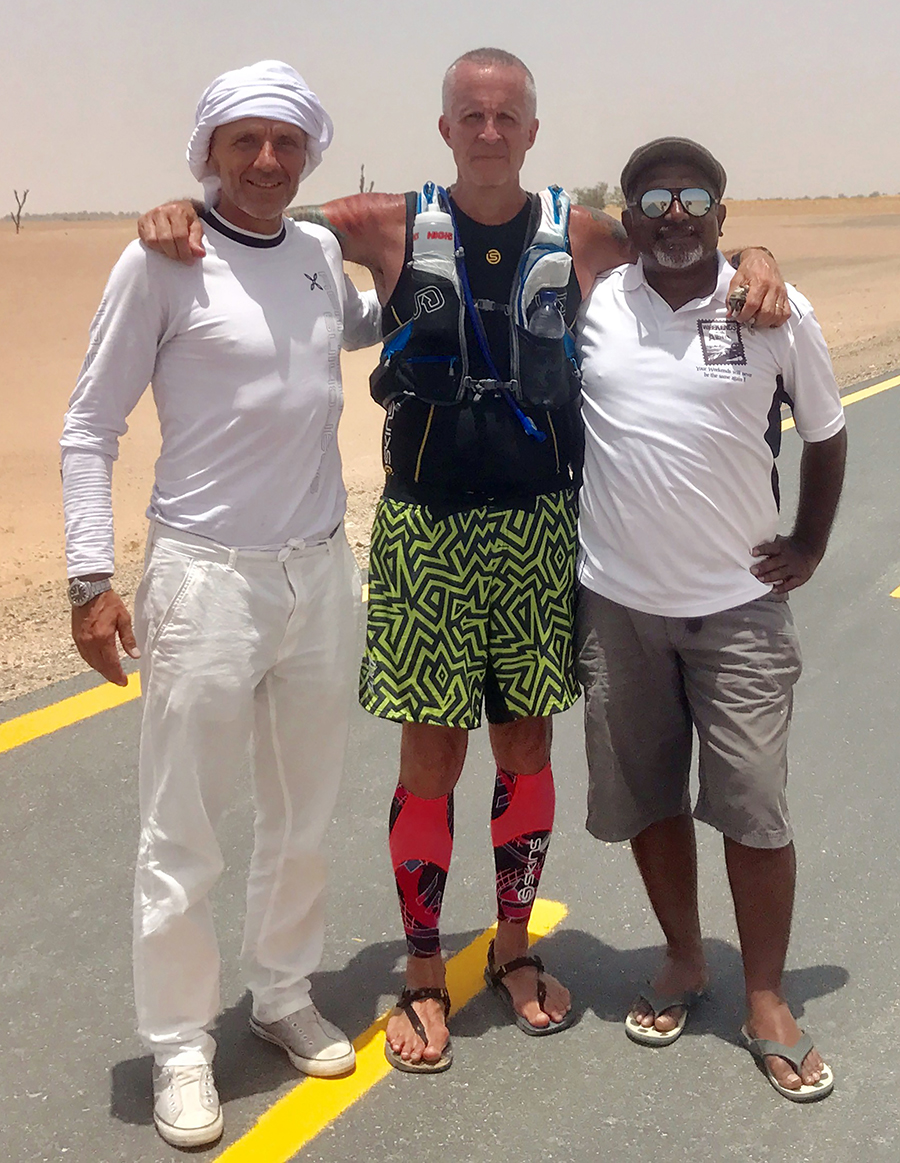 The Big Picture
In the end, Servee, Omaima, Mahan, and I met the challenge. We showed up and ran Al Qudra in July. We all safely (!) pushed ourselves to our limits in the desert in the summer heat. With Max, Servee, Pam and Mary ensuring safety, organization, and support. Testing your fitness on how far you can run is a great adventure under any conditions. Our small group of runners each achieved great success by accepting the challenge and running between 30km to 46km in such brutal heat. In true Ultra-marathon tradition, we all swapped our silly stories after we finished and look forward to more of our Ultra-running buddies joining us next time. While Max presented us with gifts from the sponsors we were already planning our next extreme adventure with Max and Servee! ■