Three hundred miles off the coast of Baja, California exists the remnants of an ancient volcano known as Roca Partida. Discovered by Spanish explorers in the early 1600s, this tiny uninhabited island is just a speck in a vast and empty seascape. It’s only topside inhabitants are the birds that flock to the area, but beneath the surface, it boasts one of the most impressive spectacles of pelagic marine life on the planet. 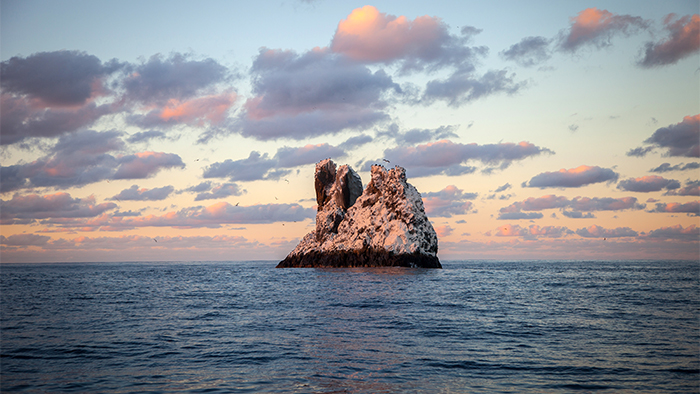 My journey took me from the marina in Cabo San Lucas, on a 30-hour boat ride with a sea that was anything but calm. The excitement of the journey ahead was temporarily dulled by a lack of sleep and a constantly churning stomach. After our first night’s dinner, Eric, our dive guide, and in-house marine biologist, briefed us on what to expect in the coming days and discussed some of his ongoing research in the area. This buoyed our spirits, and we headed off to sleep with a renewed excitement for what was to come.

The following morning, we boarded the small zodiacs and sped off towards the rock for our first dive. What struck my attention initially was the uniqueness of the underwater landscape. With visibility of several hundred feet, the tiny pinnacle that hardly breached the surface of the ocean continued downward into the blue beyond visibility. There was less coral than I had imagined, with the wall looking like the barren rock covered with deep gouges forged along its flanks from millions of years of current and surge. 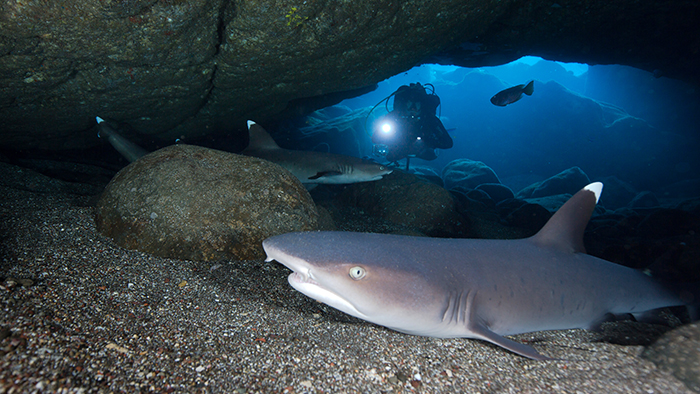 As we approached, we could see fifty or more white tip reef sharks casually patrolling back and forth along the edge of the wall above us. While passing underneath, one of the sharks latched onto an afternoon snack, making crunching noises as it quickly devoured a reef fish causing a brief frenzy of reef sharks all around us. Continuing further down the wall, we passed several large pockets where there were so many reef sharks settled into rest that they were literally piled on top of one another. It was almost comical and certainly unlike anything I had seen anywhere else. Small shoals of colourful fish enveloped the top portion of the pinnacle interspersed with the occasional school of jacks. In the depths, we caught glimpses of large Galapagos and silky sharks cruising slowly along the wall and off into the blue. The diving was amazing. 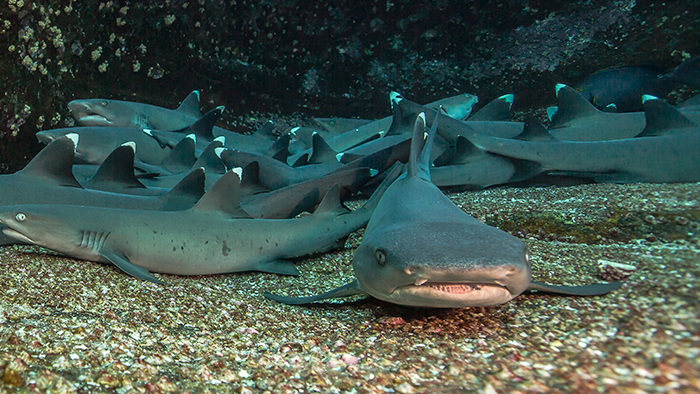 We didn’t encounter our first Manta until the end of our second dive. It appeared in the distance as we waited and watched with bated breath. I have seen the smaller reef mantas before in the Maldives and in Indonesia but somehow I wasn’t entirely prepared for what came next. The Revillagigedo Archipelago is one of the few places in the world where it is possible to see the Giant Manta Rays which are listed as vulnerable on the IUCN Red List and are the largest of the Manta family. These creatures can reach a wingspan of an unbelievable seven meters. I could hear people yelling excitedly through their regulators pointing in the direction of the Manta. It was like watching an aircraft underwater. This massive dark shape in the distance passed all the divers, then slowly turned and headed directly towards our dive guide. As the Manta approached, our guide leaned back and slowly started to swim backwards releasing a stream of bubbles from his regulator. The Manta gently glided into the bubbles and kept pace as we all watched in awe. 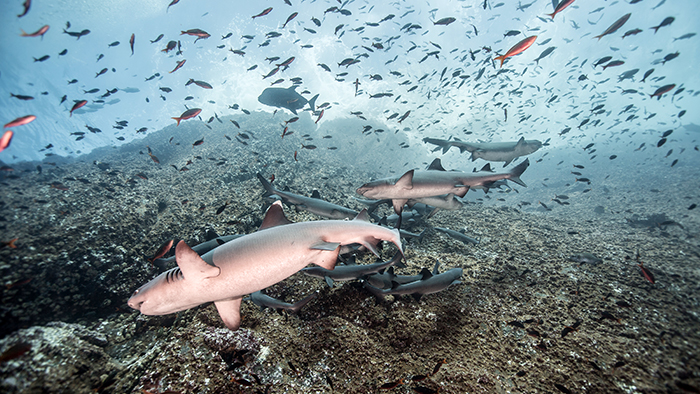 Working as an underwater photographer, I have spent entire dives attempting to approach near enough to an animal for a quality image. I generally don’t anticipate them approaching me. As we watched this mammoth creature weave in and out of the group, another appeared in the distance joining our safety stop. Before we were done, a third decided to join the party. That was Day One. 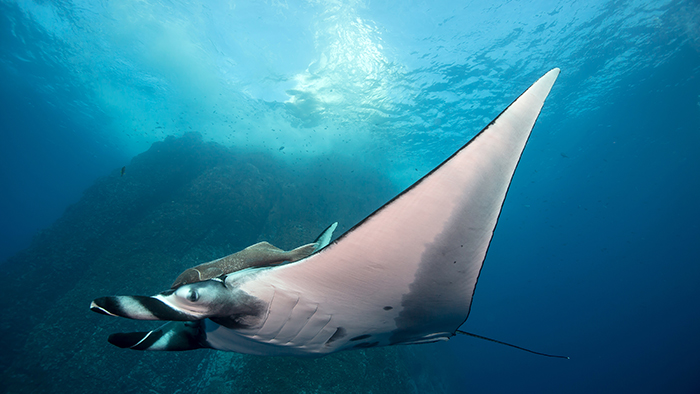 Over the next few days, we saw silver tip sharks, dusky sharks, more mantas than I can count and the occasional hammerhead shark in the distance. On Day Three we took out the small diving zodiacs to look for bait balls. Occasionally, in the right season, it is possible to find large schools of bait fish in the area. The schools attract larger fish such as sharks, dolphins, sailfish and even whales that were all present in the area. Unfortunately, we were unsuccessful in our hunt for a bait ball but a curious pod of bottlenose dolphins surrounded our boat. We quickly slipped into the water with snorkelling gear on and were greeted by the high-pitched squeals and clicks of the dolphins. They seemed playful and inquisitive but only stuck around for a few brief but exciting minutes before disappearing as quickly as they had appeared. As I made my way back to the boat, I noticed a small speck moving along in the distance far below me in the blue. It was a silky shark. I watched as it very slowly made its way up towards the surface and eventually towards me. It seemed curious and suddenly, I realized I was alone in the water; everyone else had already hopped back into the zodiacs. When I turned around to see how far away the boat was, I noticed another silky shark had snuck up behind me and was closing in quickly to investigate. I then made the hasty decision to end my snorkelling excursion, finning like mad to escape into the zodiac and avoid confrontation. 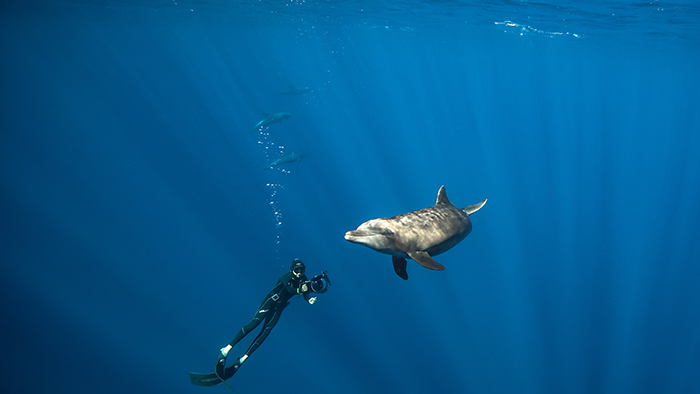 The islands of the Revillagigedo Archipelago represent an example of what is a dwindling number of truly wild and seemingly healthy ecosystems left in the world. Many species found in the area are unfortunately listed on the IUCN Red List as endangered or threatened. It is difficult and expensive to monitor such a remote area, but having responsible tourism assists in public education and conservation efforts to help protect these amazing creatures. In 25 years of diving, these islands are among my favourite destination, especially for large and sometimes unbelievably curious creatures. ■