Crokango, or the Deadly Kiss of the Tigerfish – The First Trip

I managed to get some of my line back when the aerial ballet started again. I felt the fish accelerate and to start out a series of stunts as spectacular as stressful. From the corner of my eye I saw our guide twirling across the boat to grab the net. This magnificent duo stopped thirty seconds later-which seemed like an eternity-when he managed to catch the fish in mid-air. The choreography was completed, a short intermission would allow us to try to recover the lure or rather what was left.

Three days earlier, we landed in Maun, Botswana, at a small airport devoid of any architectural interest before joining the Guma Lagoon where the lodge is located. We came to Botswana, full of hope, to discover the fishing of the Okavango Delta at the end of the period of the famous “barbell run” occurring every year in September/October. As a bonus, we had given to ourselves a secondary objective of capturing as many new species as possible, a classic challenge for the exotic fishermen.

The schedule was prepared by Guy, the owner of the lodge: we would sleep the first nights at the lodge, fishing the surrounding areas before leaving for an expedition of several days in the wild delta. 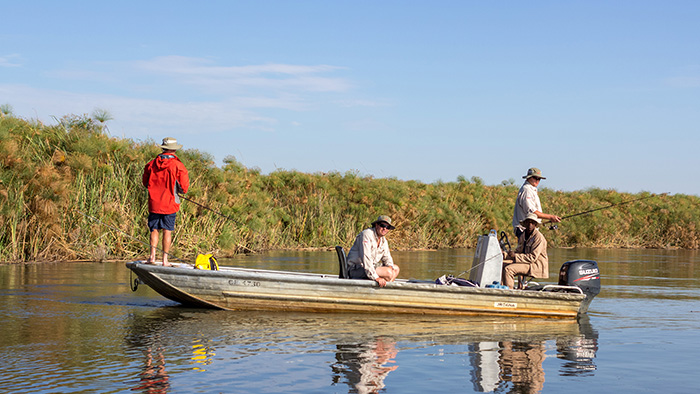 The first day generally allows us to analyze the battlefield. From the base camp, about forty minutes by boat we necessary to join the main river. The access is protected by a natural labyrinth of canals lined with papyrus. An army of crocodiles whose breastplates glisten in the morning sun protects the few sandy beaches backed by birds looking like egrets. During the trip we met the other guards of the delta: hippos, large cylindrical submarines diving to our approach; majestic elephants crossing the papyrus to drink. Regularly, a sharp cry, preceded by a papyrus slam, hinted the hurried flight of a bird hidden in the lush vegetation.

Then the boat stopped, bringing us back to the reason we were there. The guide has drawn our attention to the presence of seagrass, nurseries for baitfish around which the tigerfish were roaming: it is there that he recommended us to cast our lures. The bottom was smooth, sandy, cleaned by the current. We were captivated by the beauty of places, but in terms of fishing however this first day did not remain engraved in our memories. We had many attacks but unfortunately we lost all our tigerfish. 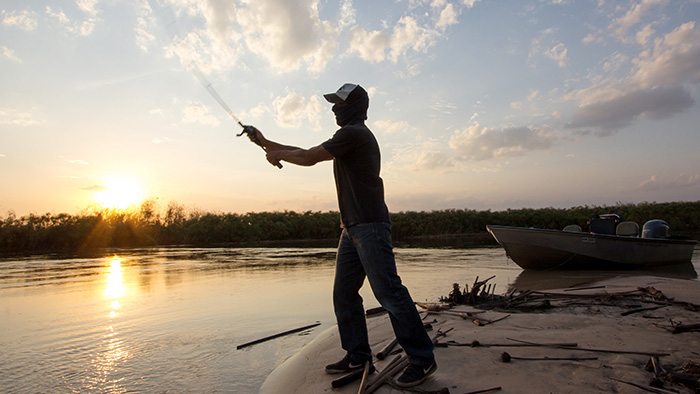 In the evening at the camp a German angler who had been looking for the tigerfish for more than 40 years politely asked if he could join us for dinner. Listening to our story of the day, he willingly consented to provide us some advice. For example he recommended us to sharpen the hooks in order to optimize our chances: when the hook is sharp, it must stand on a 45° inclined nail. His second advice was about our rubber jigs. When he saw them he turned pale. Then he looked at us fixedly: “It is essential to remove the anti-grass brush jig here otherwise the tigerfish, will spit out the bait.” he said. We immediately cut off the brushes of our rubber jigs. These small details are worth mentioning here since they significantly improved our ratio of fish caught.

The following days were consecrated to the search of runs. As if we were hunting instead of fishing. The birds provide valuable clues as well as discussions with the rare, other fishermen. While we were the only human beings for miles around, there was that memorable day in the sweltering heat, when we discovered a foolish conglomerate of catfish attacking a wide bay, within which the baitfish were prisoners. We smelled the case thanks to the birds: herons, cormorants, egrets had moved in large numbers to participate in the feast. The furious tangle of fish tails allowed us to imagine the total chaos underwater. In the general confusion, we could see the biggest catfish crush smaller ones against the border, forming a narrow corridor, chasing the “bulldogs”, the names of baitfish they coveted. Tigerfish were watching from afar the operations as if they were reluctant to ally with catfish, on the lookout for bulldog survivors trying to escape. The show was wired for sound: we distinctly heard the snapping of reeds through which rushed thousands and thousands of hungry fish. 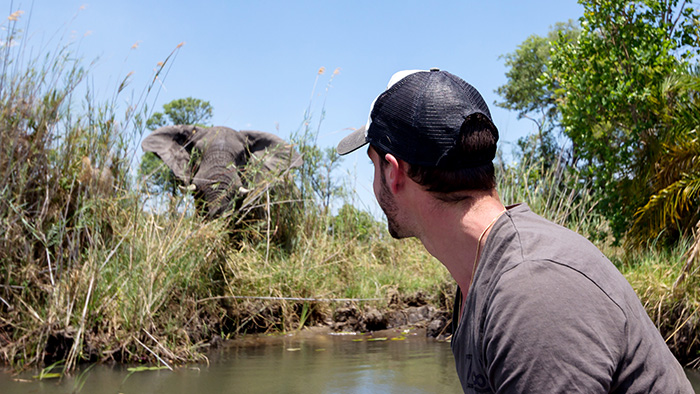 It was possible to catch tigerfish with almost each kind of lure in our box. At the end of the day, sweating profusely but always fresh in our mind through the excitement that we had have, unreal scores had been achieved, almost 100 attacks for each fisherman, 30 fish landed between 2 and 4 kg.

Note that in the frenzy our surface lures have aroused a great stir among kingfishers. When we used this technique, these birds sprang to evolve hovering above the lure ready to seize it as prey that they would then go eat on a branch or offer to their partner. Fortunately, no accident was regrettable on this trip.

We had great fun with a fishing technique that we did not know at all. This is fishing for bream. The results are steady. Applying ourselves and listening to the directions of the guide, we caught on average a fish per hour per angler. It is also fun, in late afternoon, to look for shoals of breams: they love to gather in water lilies and sea grass. These relatively aggressive fish are then easy preys when seen waving to the surface. During the fight, the fish tries to go to the bottom and resists violently but it rarely wins. The average weight of tilapia is 1kg. 2kg are beautiful subjects; the camp record is 2.7kg. Guy likes to tell that it was established just a few years ago by an English lady whom it was the first day of fishing and the first cast. 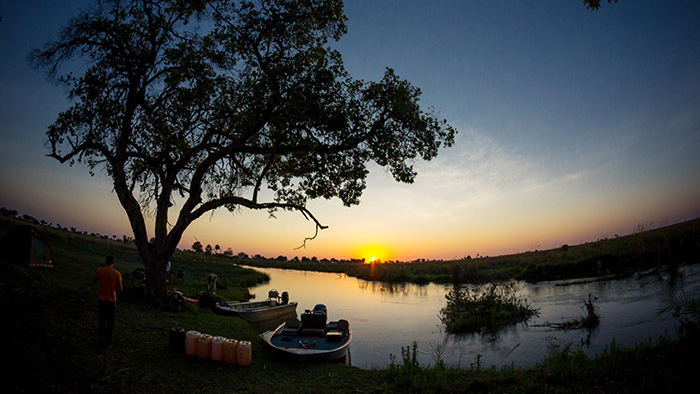