Casting from the Shore – Start the Season Now!

The season is kind of starting early this year with Kingfish being caught all over the country in good numbers both offshore and on the rocks.

Before it really blows up, I would like to say that we all have our favourites and I’m sure some might agree with my choices, while others might prefer something else. Whatever the case may be, most lures out in the market today WILL work (in the proper hands), there are however, those that give you a slight edge.

Since the majority of the fishing population fishes from shore, I will cover only shore fishing in this article. 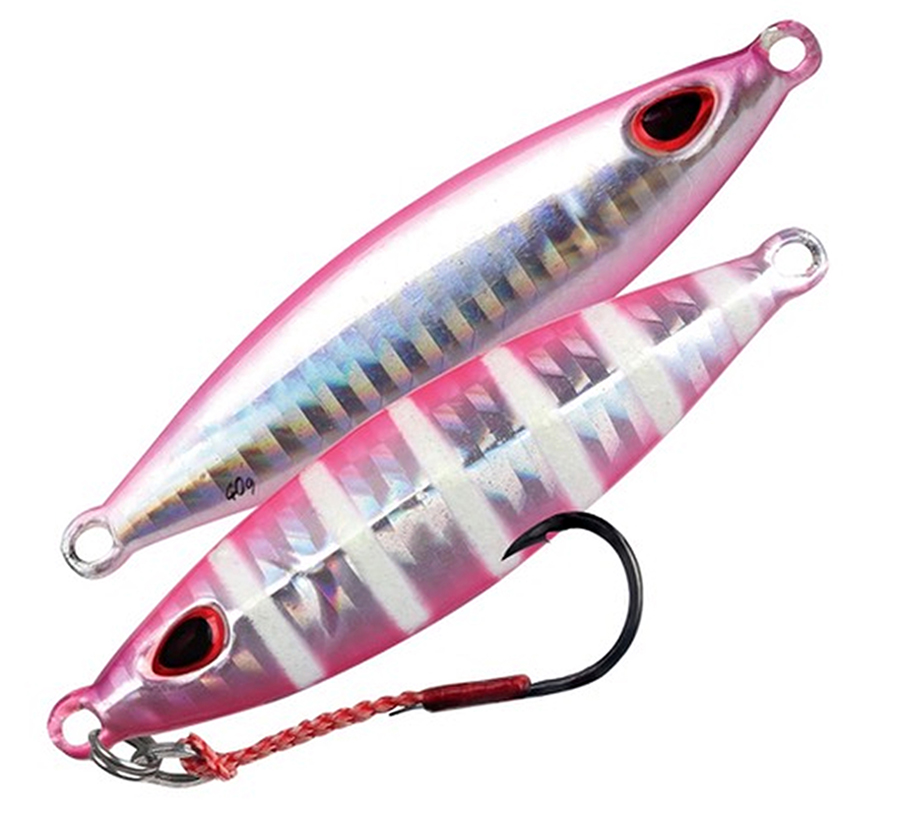 The ever versatile Koika can catch fish on the rocks just as well as it does on a boat. you can rig it for casting with just a treble hook at the  back or with the assist hooks in front for presentations closer to the bottom

I shall share some of what I cast out there to get ahead of the crowds that frequent the waters, most especially on legal fishing grounds where there would be most likely: A.) A lot of pressure and B.) A lot of anglers that will compete for the fish!

First and foremost, you need to be able to cast a long way from shore. This is because a long cast will keep your lure in the water longer, so even if a shorter rod will serve you just as well, something that will help you cast father than the rest will give you a slight edge. My rods are typically anywhere between 9-10 feet long. (2.75m – 3.05m) The longer the rod, the easier it is to reach the distance, again, in the right hands. Having a longer casting range than the majority of the people lined up on the jetty will give you a little advantage – giving your lure more time in the water as well as covering water the others are not able to reach.

Gaining distance is not only about the length of your rod – it has a lot to do with the diameter of your line as well. There are still some anglers that love using thick line to pull the fish in, that’s their preference. But to catch the fish, you have to make them bite first, so it’s really all about giving you the most advantage, I usually go for a balance between distance and power, so if a rod is rated for 5-15 kg for example, I go for the middle road – 7.5 or 10kg will work well for the balance of distance and power, thinner diameter lines give you the most distance, while thicker lines give you the most power. This is true for any fishing line, including braid, which is what I use most of the time.

The next thing is your leader, the same principles for line applies with leaders as well, thicker leaders will not only affect your casting range but will also affect the way your lure swims, the thinner the leader, the more action you have on your lure, the shorter the leader, the longer the cast, again, this is relative to the skill of the angler, but I generally use long thin leaders, I can cast a long way because my leaders are quite thinner than what most people use. If I am casting with a 7.5kg line my leaders would not be more than 12.5 kg, others prefer thicker leaders. Flouro carbon leaders are good if you have the cash to spare, mono works just as well although a bit more prone to abrasion and for me, that’s pretty much the other thing to consider, some use wire, others like me don’t, for the simple reason that you get more strikes without wire, although the tradeoff obviously is that you might lose that lure, which for me, is totally fine just as long as I get more chances to hook a fish!
Nothing weighs more heavily than the lure, both literally and figuratively. It is probably the single thing a lot of people won’t compromise on.

On low wind days and when the water is as flat as glass, the Z stick dances a dance few fish can resist This has a 24g model that creates a wake you can see from a long way

For lipped lures, I use the “So Run Heavy Minnow,” its heavy and compact and casts a long way, swims well and most importantly is very cost effective. The biggest model will probably set you back about 30+AED. Other lures that fit these criteria will cost you more than double that. 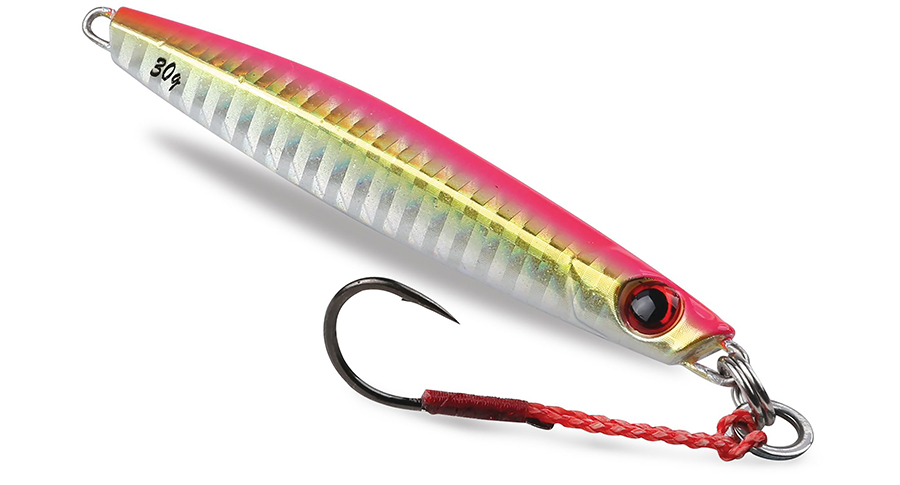 When fish want a faster presentation, the Gomoku Super does a very good job of converting lookers into biters

Jigs such as the “Koika” and lightest “Slow Rocker” often produce really good results, especially in windy conditions. I normally cast weights of up to 40g when I need extreme distance. I usually stick with 20 and 30 gram jigs and don’t really go past 40 grams. When I need something that moves a lot faster, I cast with the “Super Gomoku” or the “Storm Micro Jig.” When the sun has just risen, and depending on water conditions, I would first toss out a Koika before anything else, then when the bites get more slow, I move into smaller jigs and try to see if they like slow presentations better, in times when the fish are very tentative, I use the “Micro Jig,” which I can use for both fast and slow presentations.

Lipless minnows such as the “Storm sinking pencil” casts a long way despite the 18g weight, It’s so aero dynamic that it slices though the wind with ease and has a great darting action that makes it so easy to use. 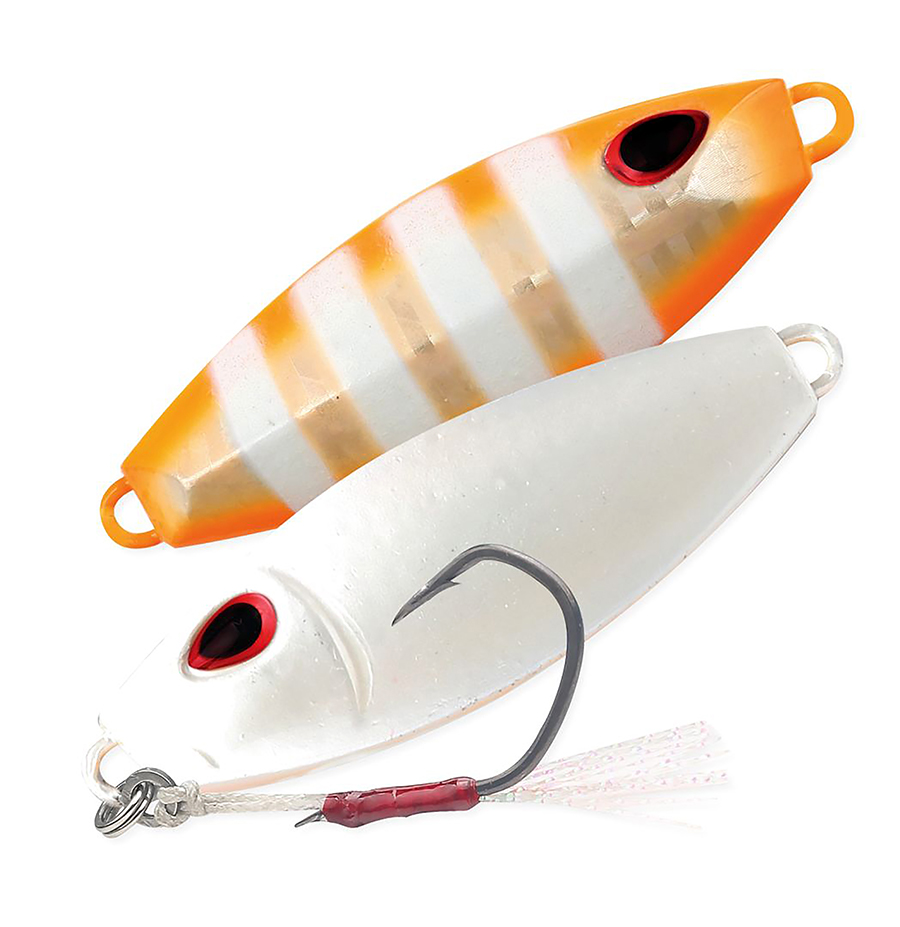 I rarely use top water lures because when I fish it’s normally off jetties, but when I do get a chance, I use lures such as the “Z stick” because it gives a nice wake on really flat calm days. I don’t often get to cast this because of the crowd in most places, but if the spot allows it, this would probably be the first lure I would toss out just before the sun rises.

Again, this is all personal preference, and those listed above are mine. Use it as a guide and check out their weights and actions online and see if your favourite brand has something similar. Most lures work and in my experience over the years, It’s really up to the person to make them work or not. Some lures might work better for others and their fishing style, and would be slow producers for the other guy. The most important thing about lures is to make them swim in a way that works for you and you get that from experience – yet another beautiful excuse for you to get out there and cast a few! ■

Till the next Tide change…