Day 3
I checked the time and it was 3:30am. Rachid had not come to wake me up and I did not want to go back to sleep, anticipating he would come in and fetch me soon. I began to pack my things quietly and courteously as to not wake up the other mountaineers who had suffered at the hands of the selfish disruptive intruders. 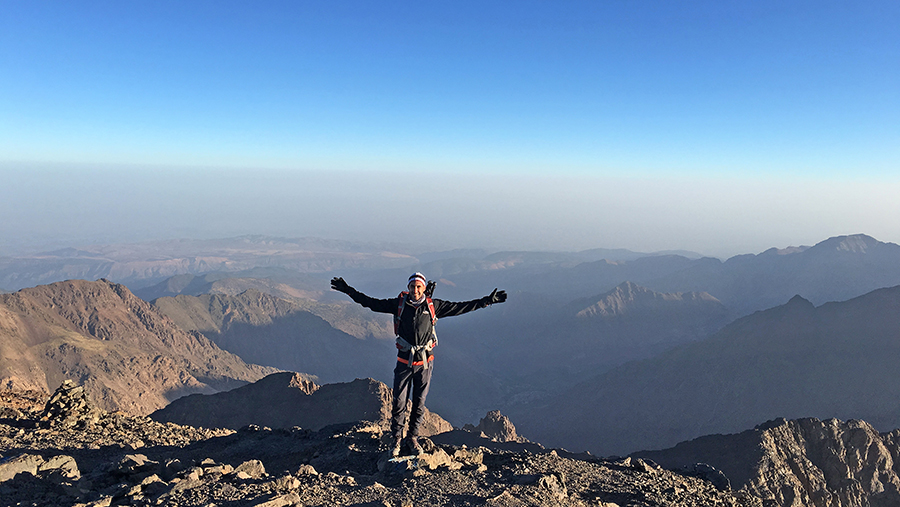 Rachid crept in 20 minutes later and told me to meet him downstairs. Feeling liberated at that point, I had a change of heart and no qualms about switching on my torchlight and loudly sifting through my bags to get my gear on. The loud obnoxious climbers on the top bed deserved to be woken up and as for the mountaineers on the lower level, I was doing them a favour giving them an opportunity to get out of bed and make it in time to a summit at sunrise. 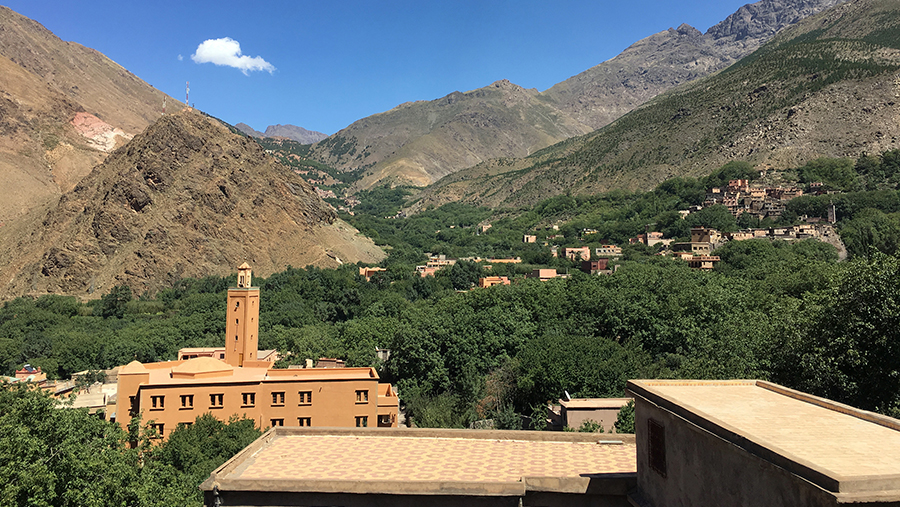 I scurried down to breakfast, washed remaining traces of porridge off my face and was ready to go. We put on our headlamps and strode out of the refuge. The constellations of the stars were as clear as if they were drawn onto the sky, illuminating the mountains and the trail we were to commence. I could see the shadows of the massive mountains barricading us from all sides as we walked in a series of zigzags up the side of the hill. I could make out a U-shaped rock formation in the distance above us. Rachid pointed to it explaining that was the ridge we needed to get to before the sun rose as that was the best viewpoint of the Atlas Mountains. From there it was just another 20 more minutes to the summit.

We were essentially racing against the sun but we were making good time. An hour and a half later and dawn was beginning to break as the hues of the sky grew lighter. We had made it to the foot of the U-shaped hill when Rachid told me he was going to pray quickly. ‘Carry on the trail,’ he directed, ‘and I will catch up.’ I could barely see the trail, a faint light path amongst the scree of rocks. Grumbling, I resigned myself to carry forth without him. I carefully began treading onwards; promptly losing my way in a matter of minutes. I knew I had taken a wrong turn as the screen was denser as I unknowingly walked further away from the more solid main route. I found myself losing my footing and slipping like the newborn kid of a Billy goat taking its first steps… It was a frustrating ten minutes as I was forced to crouch and walk slowly up a path I was sure was not correct. I maneuvered myself into a position where my balance was at an equilibrium searching around desperately trying to find a trail like a baby bird looks frantically around for his mother’s beak. After a few moments of scoping the scene, I found one that led right to the ridge. Beneath me, Rachid was approaching and urged me to walk across the slope to the trail. He acknowledged the path was not clear (although I think he was just trying to feel a bit better about myself) but that I should notice the surface becoming firmer, relaxing my nerves and irritation. 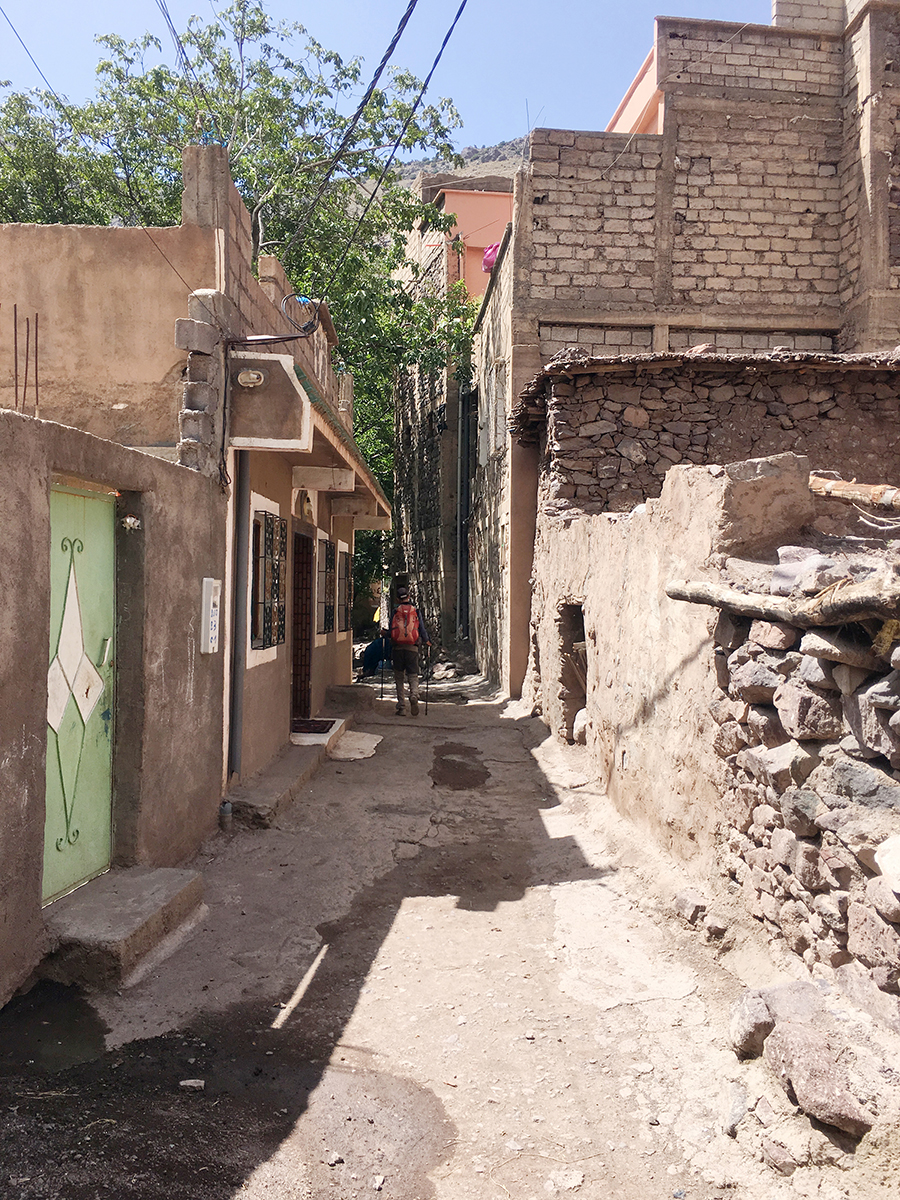 We climbed until we finally reached the viewpoint just as the sun’s rays broke over the horizon. It was superbly serene, like the scene in Lion King when Mufasa and Simba were sitting on Pride Rock observing their kingdom. We stood there for a few minutes, watching the sun kiss the peaks of all of the mountains ahead of us. ‘And there is the summit,’ Rachid revealed with relish a triangular structure sitting on top of a hill to our left.

It was another 20-minute hike to reach the summit of Morocco with stunning views of the mountain range from all sides. I posed for a few pictures and enjoyed the moment before the other travelers polluted my ambiance. Resting at the summit gave my brain time to process what my body had just endured over the past 3 hours (6 if you include the sleep deprivation). Fatigue had kicked in and the raging niggles in my thighs from the day before had flared up. I told Rachid it was best to go down now as we still had to descend all the way down to Imlin. There was a long day ahead of us. 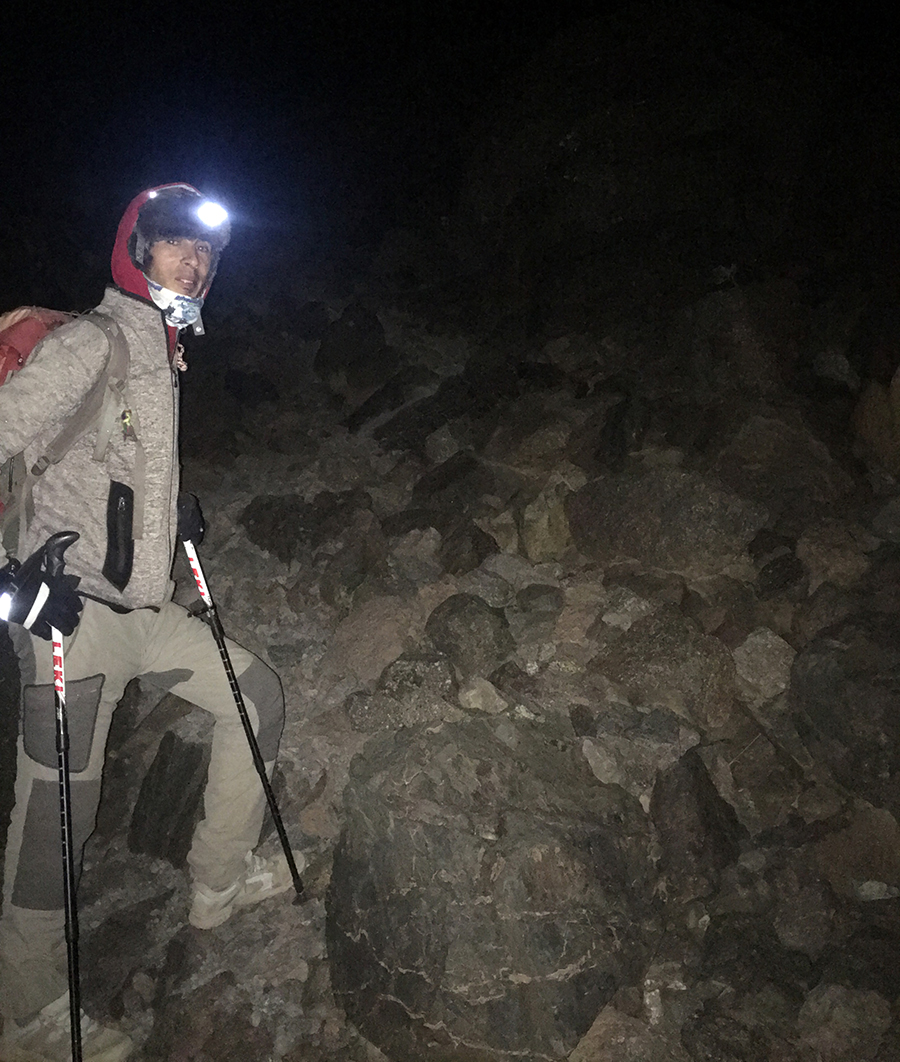 I tried sliding down on the gravel using my rear end as an impromptu sleigh to hasten the descent but I learnt very quickly that was not the best idea. I lost control of my legs as they floundered beneath me and I left a substantial portion of my DNA from backside as I slid down the stones. It could have been far more painful had I landed on a boulder or sharp-edged rock. Luckily for me I just grazed my hand trying to clutch onto something while hurtling down. Gritting my teeth and going down the old fashioned way – a stiff walk – the descent proved to be absolutely miserable, my joints experiencing uncomfortable pressure with every step-down. To make matters worse the faster I tried to walk the more I felt my balance on the rocks waver.

I finally limped into the refuge an hour later. There was no one there save for two travellers who had climbed Mt. Toubkal the previous day. They were preparing to climb another one in the next valley. We had a quick lunch (more tangine, you guessed it!), made sure all my gear and belongings in check and made our way down the mountain the same route we came up.

It was a brisk two and a half hour walk until we finally got onto the open plain where the village of Rachid lay ahead. Rachid offered to take me through a shortcut. My adventurous side was all for it but my body was wary – clearly, it meant this would be a more difficult route since barely any travelers used it. I found out the hard way, first hand, that this was precisely the case. I had been on my feet for almost 11 hours on 2 hours of sleep. All I wanted was to get to my lodge as soon as possible. We walked off the trail through thick tall bushes that clawed at my arms ferociously. A narrow path opened up after we emerged and yet another messy route presented itself. We were required to hop from stone to stone over multiple thin streams whilst pushing bushes and trees aside as they relentlessly attempted to slap my face throughout. 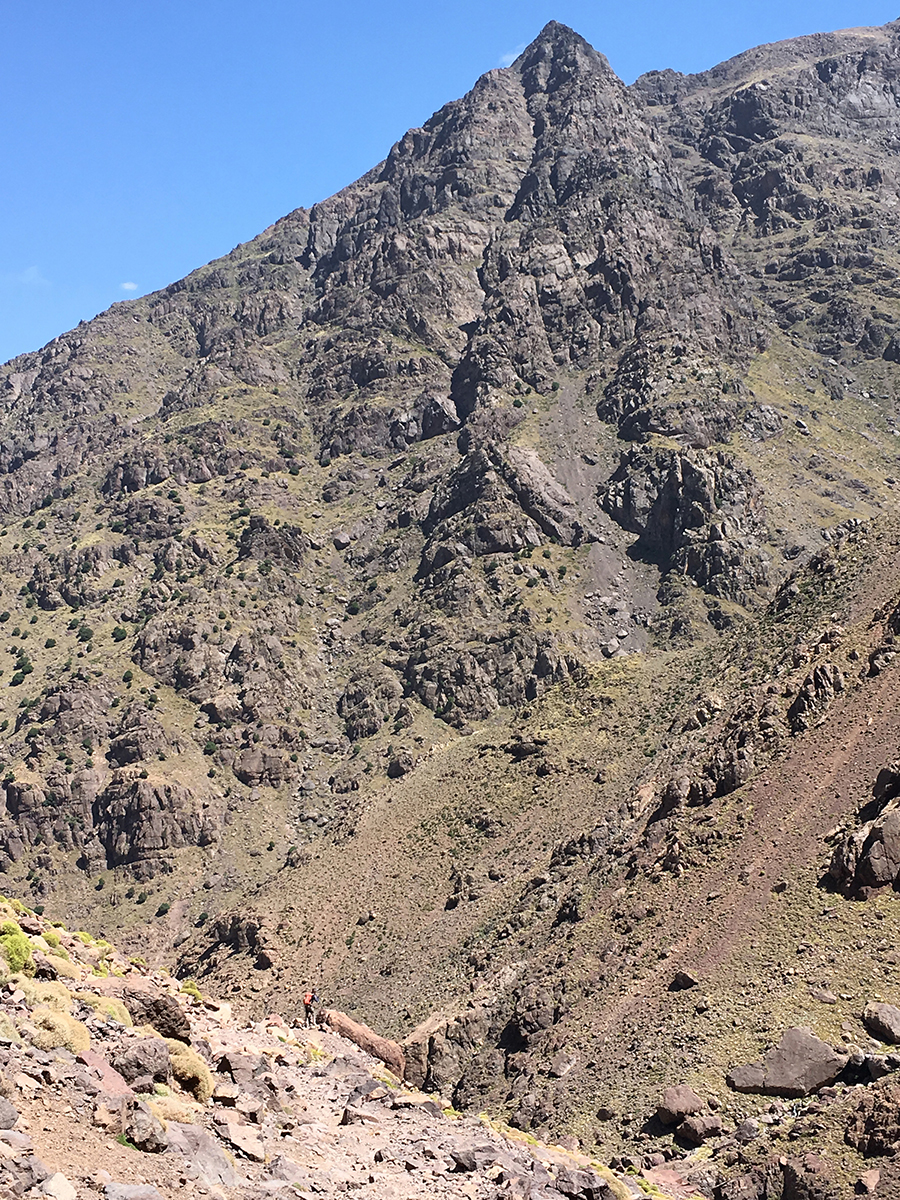 We finally made it out in one piece and approached the first houses of the villages. We swerved through small alleys, up some steps and down some more, turning left and then right. It was as if we were in a maze, I had already lost my sense of direction. We walked a little further until we had reached a welcome destination; Rachid’s home. While I was yearning for my own hotel room and a masseuse I was too knackered to be fussy. Rachid told me he was going to get changed quickly and invited me for some tea. His exuberant hospitable mother and sister welcomed me in to sit in their living room. The view from their window was enviable; the Atlas Mountains gleaming majestically ahead. It was overwhelming to search the distance and spot that U-shaped ridge up in the sky in the horizon I had just sat at during the sunrise.

Rachid looked like a different person as he reappeared in a lumberjack shirt and jeans. Prying me out of the hands of his mother and sister, he guided me through his village, down a small trail that led us to the main path right in front of the Mr. Aladdin’s shop. He was sitting outside his shop and noticed us approaching. Ever the true salesman he congratulated us and offered me to buy anything in the shop at a discount as a congratulatory present. I thanked him but all I wanted to do was get to the lodge and sleep. 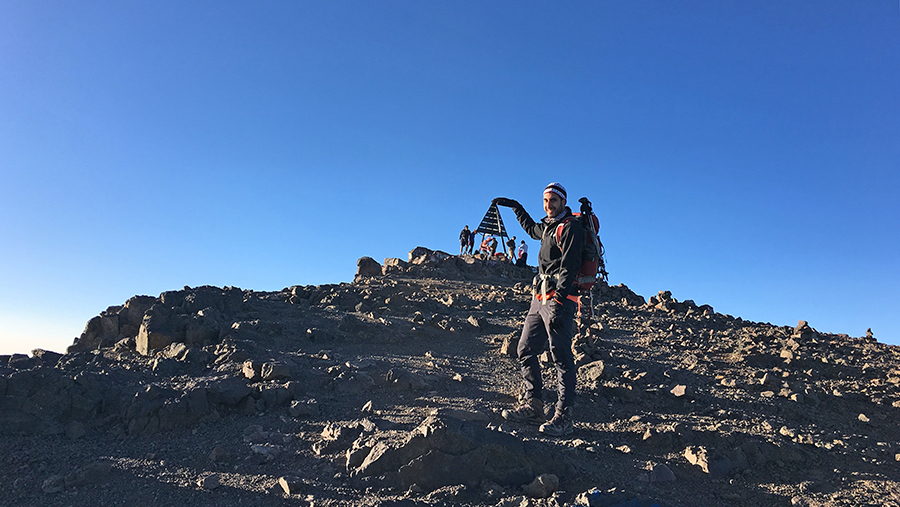 The rocky trail we were walking on turned into the tarmac, a welcomed sign that we had finally reached civilization. We haggardly limped into town as minivans and small cars bustled around us, careening through the rickety streets. The lodge itself was nearby, a small boutique, true to Moroccan form again well-hidden and nestled snugly in the intricate folds of the town. A long shower in the room was followed by a quick nap. Before long though I was interrupted by the hotel manager knocking on my door to inform me that dinner was served.

Delicious tagine (it seemed that it was the only thing I was destined to eat on this trip) was served and again, like Rachid’s house, there was a beautiful view of the mountains as the sky darkened and nightfall crept over the peaks. Two Belgian couples who were with me at the refuge spotted me from across the room and waddled on over to share my company. I was too tired to engage in any conversation with them. They were lucky the did not sleep in the same room as I did in the refuge and boastfully claimed that everyone slept once the lights went out. That was exactly what happened to me when I returned to my room that night; I switched off the lights, collapsed on the bed and instantly submerged into a deep sleep, one of the best I’ve had in a long while. ■