Having raced at a decent level for many years for a number of different teams, each with their own bike sponsors, it is always interesting to throw my leg over a brand that is completely new to me. There is always a little trepidation about how the bike will feel and perform. Comparisons to old favourites. Will the geometry work for my riding style? Will I be able to set the bike up to my perfect riding position?

The Silverback Scalera landed with me at the end of 2014 and on looks alone it is a winner. 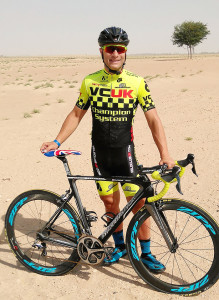 Super aero and aggressive looking, with the horizontal top tube and seat stays coming in low on the seat tube, it looked fast without even moving! Silverback make a whole range of road bikes and the Scalera falls firmly into the ‘aero’ category. However, looks mean nothing without the performance to back them up, so the first step was to set up the bike. The 550mm top tube on my size medium meant that with a 130mm Zipp stem and a bit of saddle fore and aft adjustment I was exactly where I needed to be. Now for the real fun.

The first ride on a new bike is a telling experience. If it feels totally wrong, then it can be a long road to making it feel right. Fortunately for me the Scalera felt ‘right’ from the off, and by ‘right’ I mean fast and responsive, with predictable cornering and no flex in the frame during out of the saddle efforts. A blast round Dubai Autodrome with some 40kph laps told me some of what I needed to know, but only time and many kilometres would reveal the full story.

The first big test for the Scalera was to be the UCI 2.2 Stage race, The Tour of Sharjah. Sadly this didn’t go to plan, with a massive high-speed crash on the second stage leaving me with a separated shoulder and three cracked ribs. However, the Scalera came out of the carnage with nothing more than scuffed bar tape and saddle; the massively over engineered bottom bracket and head tube making it a super tough piece of kit. Phew, that would have been a bit of a downer, a wrecked new bike! 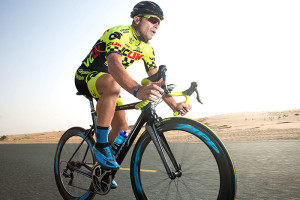 Since that initial ‘almost’ disaster, Strava tells me that I have done over 30,000kms on the Scalera in the UAE, Bahrain, Qatar, Spain and the UK. We have ridden solo, ridden in massive pelotons, ridden for fun, ridden for coffee, raced, been in breakaways, chased breakaways, climbed, hit speeds in excess of 100kph on descents, sprinted, ridden super-fast criteriums, ridden in head winds, cross winds (lots of cross winds!) and tailwinds. We have even spent over six hours together doing the 220kms of the UAE’s Coast to Coast more than once. We even qualified for the UCI Gran Fondo World Championships. All without missing a beat.

So since my first dalliance with a brand better known in South Africa than Europe, and better known for their prowess in producing mountain bikes than road bikes, a couple of things have happened. Firstly, I am now on my second Silverback, a Scalera SBC equipped with Shimano Dura Ace Di2 (think BMW M3 as opposed to a top of the range 3 series!). Secondly, we have become a two Scalera household as my Scalera now has a little sister, resplendent with hot pink stickered Zipp wheels and hot pink handlebar tape. Again, the Scalera was a doddle to set up and has proved comfortable (and fast) right from the off. 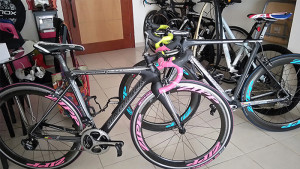 I know it’s easy to say that all carbon bikes are made in the same factories and that they can all be ‘much of a muchness’, but the lay-up of the carbon, the shape of the tubes, the geometry of the frame all go to give a bike a slightly different feel from the next make and model, and that is a tangible thing that does matter. The other serious consideration is value and what you actually get for your hard-earned cash. A lot of the bigger brands have ‘in-house’ component manufacturing capabilities, which means they are able to cut corners on the finish and spec. of the bike you are buying. With a smaller brand you get the full groupset (brake callipers and hubs are not replaced by
non-branded alternatives for example), and the finishing kit tends to be aftermarket brands too. This all adds up to a much better value product as the big brands don’t pass this saving on to the customer, it just gives them a better profit margin!

For the type of riding that I do here in the UAE day in, day out, Silverback’s Scalera has proven itself to be ideally suited, highly competent and incredibly resilient. All in all, a mighty fine bicycle among some pretty serious competition.