Tried & Tested: Sandboarding with a locally made board

Recently I had the opportunity to go and try out sandboarding with Simon Mark Hunt, the impressively bearded guy behind a cool new locally based brand called ABOVE sandboards, who lovingly handcraft sandboards right here in Dubai. 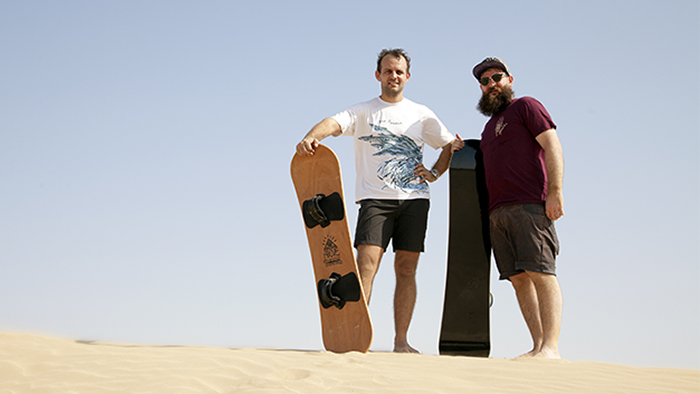 Simon says about his newly formed sandboard brand, “I have loved sandboarding since I was a kid in Australia, and now I really enjoy making them too. Each board is a little piece of wood crafting art. Taking a board from being just a design idea in my head to then actually making it and riding it is a really enjoyable process.” 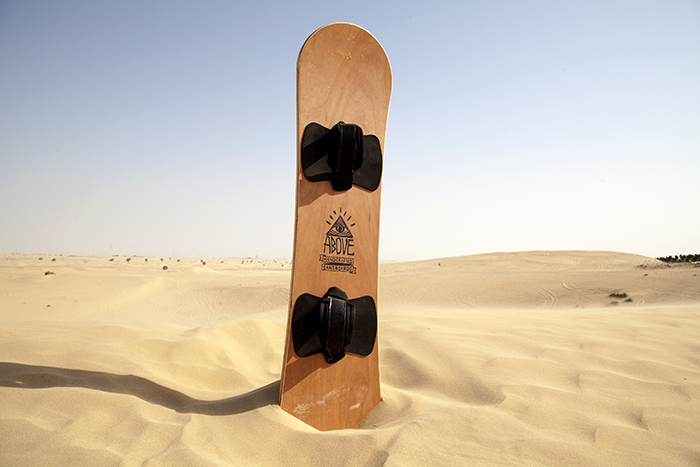 Now, I have been sandboarding before, well at least I thought I had! But this trip was a total eye opener to how fast and fun sandboarding can actually be when you use the right gear. Simon explained that a lot of the sandboarding that is happening at desert camps in Dubai are using snowboards (not proper sandboards) and that snowboards are really slow and sluggish on sand. When we were out in the dunes, Simon explained the difference to me between the two boards, pointing out that the main difference between snow and sand boards is the size and the base material. Sandboards are much smaller than snowboards to reduce the friction caused by too much surface area. While an average snowboard is around 160cm in length, a sandboard is only 115 – 139cm long. He went on to explain the difference in the base materials and also explained how sandboard wax plays a huge part in making sandboarding so fast. “The base of a sandboard is very hard and smooth, unlike a snowboard that has a textured finish. When you apply wax to this hard smooth base, this is what makes you really fly.” Explaining the science behind it, Simon told me that the wax works in two ways, firstly filling up any microscopic scratches or holes in the board base, then secondly (and more importantly) acting as a static electricity blocker.The thin layer of wax enables the board to break free from the ‘stickiness’ feeling you get from a static build up, and with the wax it enables you to accelerate at similar speed to a snowboard. 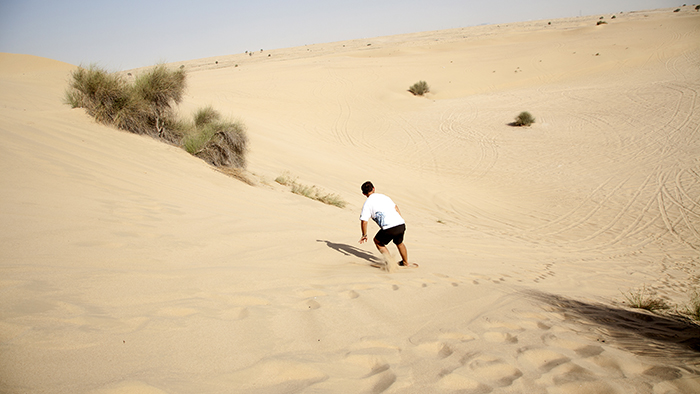 He let me try the boards without wax first, and it’s faster than the snowboards I’d ridden on sand before at desert camps, but nothing too explosive. But, then he waxed the board for me and let me go… WOW! I really couldn’t believe I was on sand, the speed was crazy fast! And naturally I ended up on my sandy backside quite a few times! Simon says that once you get used to the speed you can start carving and jumping in a similar way to snowboarding. You do need to keep waxing the board before every big run, but this was ok as it gave me a little rest after climbing back up the dune. It felt great, like I had to work for my ride! Waxing your board is a bit like the karate kid, you rub the wax on, then rub the excess wax off by rubbing the board a few times back and forth on the sand. Then it’s ready to fly down the dune at a high speed! 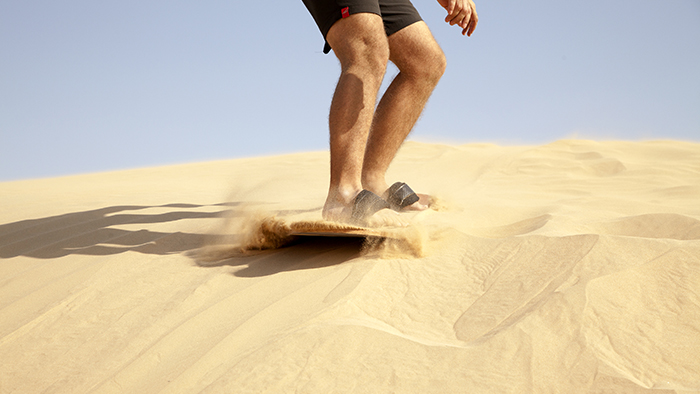 Sandboarding like this is really fun, way better than I have ever experienced it before. I would say it’s a really nice way to spend some time with friends while camping on a weekend, or even heading out specifically for a sandboard session. There are so many massive dunes around Dubai, and anywhere you go out of Dubai you hit the desert and big dunes that are amazing for sandboarding.

ABOVE Sandboards are available at GO Sport stores across the UAE, Boards range from 795 – 1,200 QAR/AED