At 5671m, Damavand is the highest peak in Asia and the Middle East. When a mountain is a near perfect cone shape it is known as a stratovolcano. Damavand still has some minor volcanic activity and provides inspiration to many poets and artists. Standing in isolation and being the highest point in the Alborz Mountains it truly is a destination that leaves climbers, hikers and tourists gazing in wonder. It is the stunning visual appearance plus its exotic location in Iran that draws many not only to visit the surrounding area but also to climb to the summit.This month we look at why Damavand is becoming increasingly popular for hikers and climbers. In August, OutdoorArabia is running a guided trip to Iran to climb this evocative peak so continue reading to whet your appetite for adventure and find out what it is all about. An attempt on Damavand will definitely put Iran on your list of destinations to visit.

Iran is pretty special. Everybody has their own image in their mind of this mysterious country in Western Asia. Formally known by the more romantic name of Persia, it is the 18th largest country in the world and the 17th most populous country in the world with nearly 80 million inhabitants. Bordered by such countries as Armenia, Azerbaijan, Kazakhstan, Russia, Turkmenistan, Afghanistan and Pakistan, Turkey and Iraq it is not surprising that its history is turbulent and constantly changing; religion, politics, economics, culture. Virtually every aspect of life here has been subject to many influences and abrupt changes. This is what makes it interesting. Over the last few years however, foreign visitors are once again rediscovering Iran as a fascinating place to explore as they once did when it was part of the hippie overland trail in the 1970s.

The Hippie Trail was a 10,000km “pilgrimage” from Western Europe and the United Kingdom across land to places in the east such as India and Thailand. Pleasure seekers carrying nothing but rice bowls and wear brightly colored clothes went in search of a different lifestyle and the finest herbs. Places and countries they visited have become famous such as Freak Street in Kathmandu. Iran was on the trail back then and freely open to all nationalities. Present day explorers now arrive in Tehran via FlyDubai and with new mountain bikes to explore the trails and with trekking poles to climb the mountains.

Because of its geographical position Iran has been subject to enormous influences in all its walks of life. It is also home to one of the world’s oldest civilizations. Any visitor who returns from Iran will show you pictures of stunning architecture, contrasting landscapes and talk of the welcoming friendly people. Of course if you are from a country such as the UK or the US, the visa situation is slightly more complicated but still possible. Visitors from countries such as Germany and even South Africa can get their passport stamped on arrival. 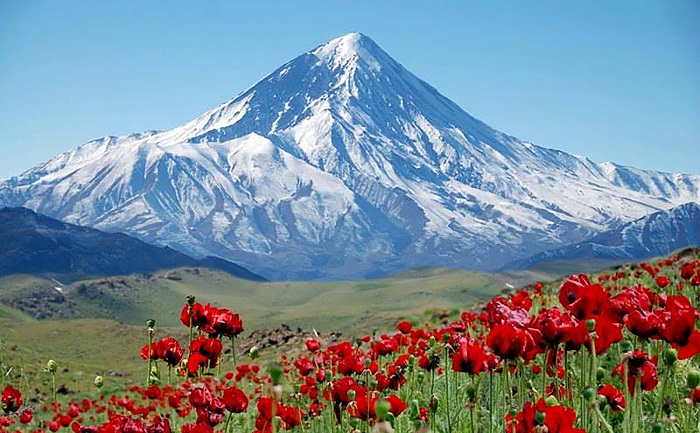 Mount Damavand is important to the Iranian way of life and is even featured on the national currency. The peak is located only 66kms northeast of Tehran and plays a significant role in many Persian myths. It is the symbol of Iranian resistance against evil rulers and foreign rule in Persian poetry and literature. In other stories, the three-headed dragon Aži Dahāka was imprisoned within Mount Damavand, and had to remain there until the end of the world.

At the summit of Damavand there is a well-preserved crater that is 300m in width. Here you will see active fumaroles, yellow sulphurous rocks, pumice stones and even a lake in the summer. A fumarole is a common feature in land sculptured by fire and volcanoes. It is an opening in the Earth, through which steam and gases such as carbon dioxide, sulphur dioxide, hydrogen chloride, and hydrogen sulphide are emitted. It can be quite spectacular and gives a climber an ethereal, unearthly feeling. Damavand is relatively young in its formation and the conical shape that stands in isolation makes for a route that is very direct on nearly all sides. Currently despite changing global temperatures there are still two large areas that hold glaciers, both on the north side. The climb in the summer involves only a small passage of hiking on snow and the path is well trodden. During the winter, the terrain completely changes and temperatures drop. Deep snow and temperatures as low as -40 degrees Celsius can be expected but this makes it a paradise for ski mountaineering. Winter is definitely quieter and provides a completely different experience.

Amongst Iranians, Damavand is very popular and there is skiing at the resort that is even possible in spring. Being close to the capital, Tehran, accessibility is easy and the hiking routes can get busy at the weekends. 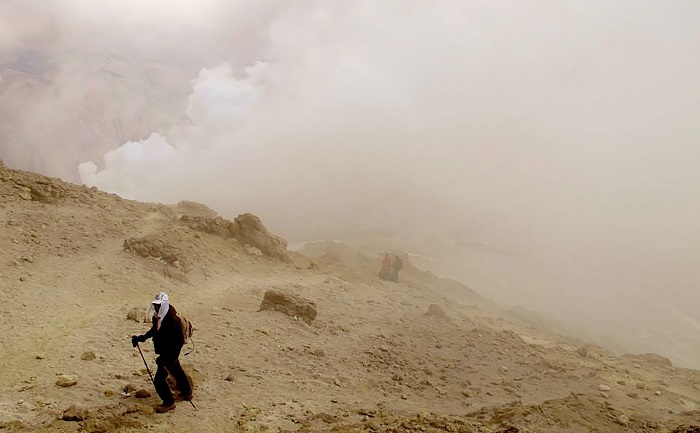 There are many routes to the top and at these altitudes it is always a good idea to give yourself plenty of time to adjust to the altitude, include a spare summit day for those moving at different speeds and even to allow for periods of bad weather. Damavand is only a few meters lower than Kilimanjaro, slightly higher than the trek to Everest Base Camp and as an alternative to other mountains in this height range, it is perfect for those seeking their first adventure at altitude. It is a relatively short trip and can be done in less than 10 days. The hiking distances and length of days are shorter than a Kili or EBC trip so in this respect it is easier. As always care and a gradual schedule for acclimatization is appropriate but with this approach, most hikers should be able to summit and take home some memorable experiences on a high altitude mountain.

Around the mountain, the villages have been developed to cater to tourists, although still basic which is a good thing. At the village of Polur to the south of the mountain, the Iranian Mountain Federation have established a camp. The most popular route to the summit is the Southern Route which has some steep steps and a camp midway at 4220m called Bargah Sevom.

How to prepare yourself 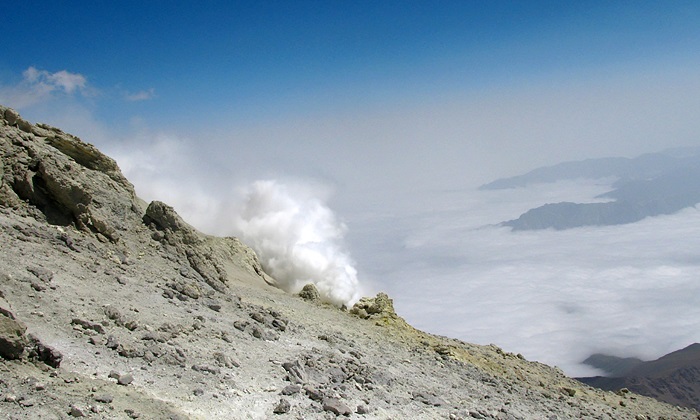 The Damavand climbing season in summer starts from the middle of June and can last to mid-September. The best time is in July and August. During this period the footpaths are generally free of snow and the weather is usually stable. The climb to the summit of Damavand in summer is not technically difficult but physically it can be challenging unless you have followed a pre-expedition training schedule. See the coming months for exercises that can be used to strengthen your hiking muscles. The main challenge of the climb is allowing your body to adjust to the higher altitudes. To raise the chance of success and lower the risk of Acute Mountain Sickness (AMS), it is best to allow extra days in the overall itinerary. Sometimes they are not used and sometimes they are.

Although statistics can be misleading you can expect to climb a total eight kilometre trail distance in 10 hours. One of the advantages of a summer ascent to Damavand is that you can access some of the lower camps by vehicle saving your efforts for summit day. Summit day is about six hours which is achievable for many and with a height gain from the base to the summit of just over 2600m that is spread over three to four days. The average angle of the slope over this distance is 21.8 degrees but with some sections up to 30 degrees.

If you are successful and the weather is clear, standing on the summit will give you clear views of the Caspian Sea, the capital Tehran, Lake Lar, the huge plain of Varamin and the green jungle in northern Iran. Climbing Damavand in Iran is a lifelong memory and to be able to stand on the highest point in the Middle East will be life changing and maybe a start of a life of future adventures.

To enquire more about the OutdoorArabia trip to Damavand, see our webpage or get in contact via Facebook or email. http://outdoorarabia.com/international-trips/damavand/