A Boulder That UAE Forgot

It was one of the sunny Fridays. Two bouldering aficionados are back in Ras Al Khaimah in the middle of September. What brought us here is “THE CUBE” a boulder that UAE forgot, a rectangular hut size rock in Wadi Shahah. A juxtaposition of RAK’s Hajar Mountain range in the background with this standalone boulder in the field, its texture and contrast never fail to attract us. Of course it is hot out there.

How to escape the heat during summer? The simple answer is “Don’t go out” just stay inside fully air-conditioned offices and flats and often cars. But can we really can spend our life in this situation, really?

Escaping intense heat by climbing in indoor gyms is fair enough in summer. It is a way to get ready and train for the upcoming winter climbing season in the United Arab Emirates. Climbing outdoor in the middle of September is complex psych of thirst for being exposed in earth, dust and humid winds and some add-on stupidity. We have to be brave enough to go out and this made us go climb a rock. We already are acclimatizing well with UAE summers. We were here at “The Cube” last year too, it was me and our friend – Emirati climber Saif, along with Harold marking the 14-year old kid’s first outdoor trip in the UAE. Harold’s family moved to the UAE last year from Singapore where Harold is a champion in a junior bouldering competition in Singapore. Kiwi-French youngster Harold is not only a talented bouldering problem solver but also has the climbing spirit in his blood. 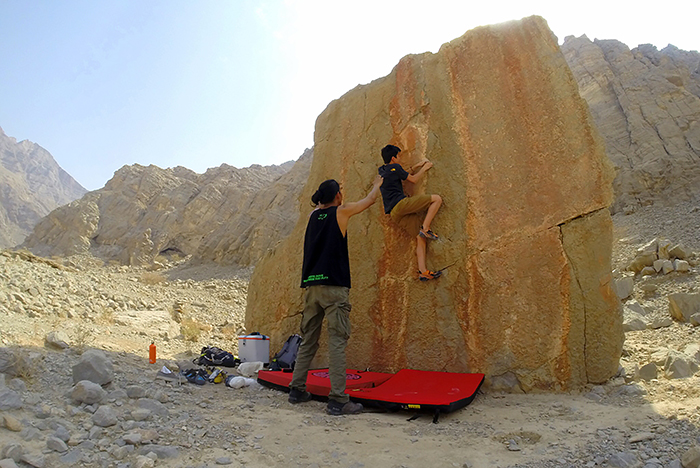 This time of year, only I and Harold head back towards RAK to repeat “The Cube”, hugging and chilling around by eating some chalk. Our crash pads are our prayer mats to worship this earth wonder —The Cube.

We didn’t see any chalk dust on the boulder nor boot markings around it, assuming no one has ever come back to hug this rock ever since we did last year. We’re not surprised; “The Cube” is neither popular nor on the top list for outdoor climbers. Lack of interest in bouldering, or considering it is too easy compared with rope involved types of Sport or Trad, or lack of good spotting buddies and no crash pad, make The Cube a low profile boulder. Actually The Cube is just near some of the popular road side crags of RAK Vegas (what climbers usually nickname Ras Al Khaimah because of its rich crags for climbing). Opposite on the other side of the road to the cube is the area for some of the busy sport routes. To the same side of the Cube is the Hajar Mountains area where lots of multi-pitch sport and trad lines including the Kharzang 90m 3-pitch bolted route we climbed last year. 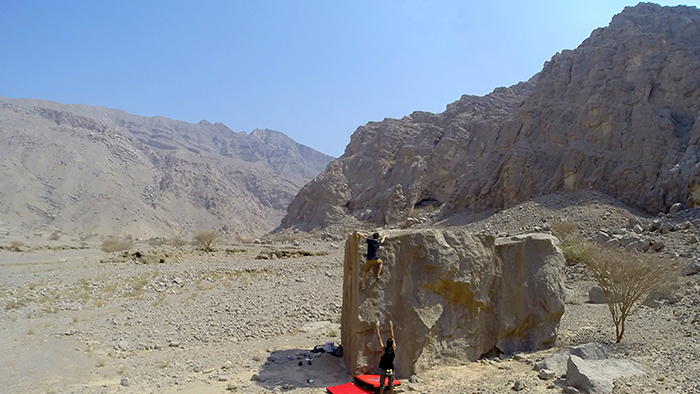 We hit there by 10am. Keeping ourselves hydrated is key in this heat. We laid out our crash pads and stretched. Harold warmed-up on the V1 flake first. Whenever we get our toes into our climbing shoes, it felt like the skin is literally burning and That doesn’t even come close to describing the actual suffering of my toes — it’s way hotter. We sit back and chill while hydrating which is another good part of the game. Some breeze whispers on our faces and we call it a lucky moment.   THE CUBE – RAK, three side climbing surfaces, with another face with a ledge-like formation for easier descending off from the top of the boulder. After each climb on a particular bouldering problem, We down climb. Or there’s a bolt on the flat roof top of the boulder for you to equip with ropes to rappel down. 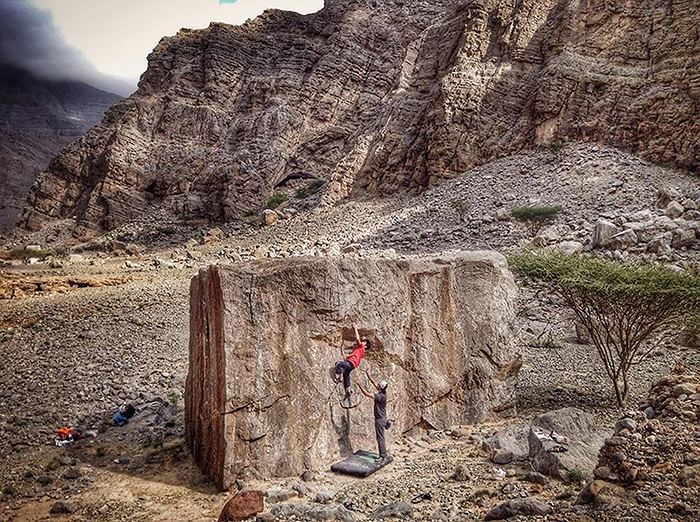 We had two crashpads which we often use as our comforter during rests. We worked Mike’s V4 problem at around 11:00 a.m. with the naked sun on our faces. The rock is hot, the wind is hot and everything is HOT. This is not a very good day. “Dude!, My toes are burning” , Harold said. He’s right, both of us were suffering and we thought that it’s time to pack up.

“The weather is scorching hot, but it was awesome dude!” Harold said it out loud.

We then recall some of our stories and sharing good vibes while we rest. It’s one of the climbing magazines of late 2010 that brought me to the UAE. There is an article about climbing in the Arabian Peninsula entitled “Diamond in the Dust“ written by Molly Loomis. It describes Oman rock climbing; its limestone rock, deserts dunes and the sounds of the ocean are those which supported my decision to move to Dubai for work. In my early days in the UAE, I did buildering around Abu Dhabi and I was almost arrested by the police. (Yes buildering is climbing the building, making moves on any climbable manmade structures). Then I was inspired by Abu Dhabi climbers like Toby and Dave who welcomed us to their home’s boulder wall to train. Nowadays, outdoor bouldering in UAE is growing; from one dedicated boulder gym – Rock Republic, to meeting folks with same interests. Whilst outdoor builderers are still rare.

Harold is pretty positive about finding more boulders in RAK, he said “Unknown routes, plenty to discover I think!” 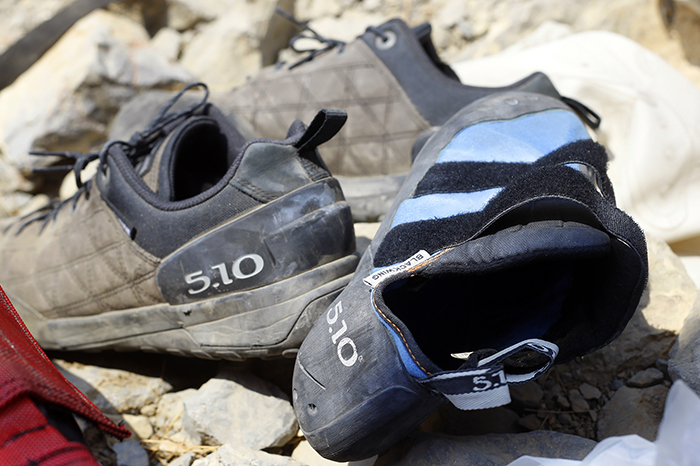 He is right, some of them have been discovered such as the Red Wall Boulder Field which requires an hour of intense 4×4 driving plus another hour of hiking makes those boulders more isolated. Even “The Cube” which is a lesser climb, but a classic bouldering problem in UAE is an hour’s drive from the Dubai Airport.

The UAE still has huge potential to develop bouldering in the region with so much more to discover and offer.Go climb a rock folks.